The pro-term speaker said that only the official name as per the Election Commission certificate will be kept in the records of the parliament. 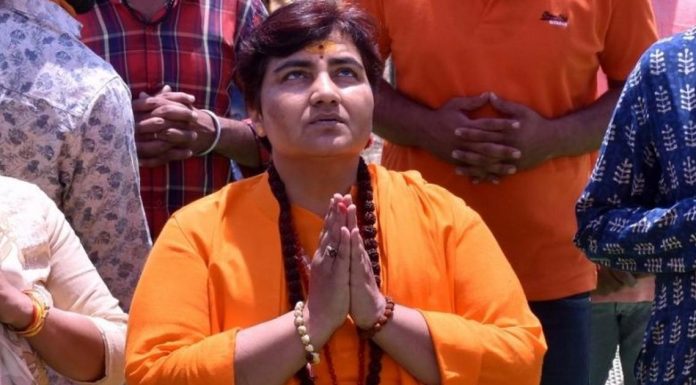 The newly elected BJP MP from Bhopal Sadhvi Pragya Singh Thakur again made news today while taking oath as a Lok Sabha MP, when objections were raised on her name.

While taking oath of duty in Sanskrit, Pragya Singh mentioned her name as “I, Sadhvi Pragya Singh Thakur, Swamy Poorna Chetanandand Avdheshanand Giri”, including the name of her Guru. But before she completes hare oath, the officials of Lok Sabha interrupted her saying that she has to take oath in the name of God or Constitution, as they thought she was taking oath in her Guru’s name.

To this, the Sadhvi objected saying that she was merely taking her name, and she had written the same in the forms also. But the Pro-term Speaker Videndra Kumar intervened at this point, reiterating the objections by the Lok Sabha officials. He said it is clearly mentioned in the rules that you have to take oath either in the name of the god or in the name of the constitution. To this Sadhvi stuck to her point insisting that it is her full name.

After this, the speaker asked her to say her full name, and she against started the oath with her full name as the first time, but this time the Congress MPs started shouting, objecting to the ‘wrong’ name used by the MP to take oath. The speaker asked them to keep quiet, saying that he will get the records checked. He asked the officials for a copy of the victory certification issued by the Election Commission to check the correct name. He said that the name mentioned in the certificate will be considered as the official name which will go in records.

Amid this ruckus, Sadhvi Pragya Singh said ‘first let me take oath in the name of God’, and the speaker stood up from his chair and silenced the Congress MPs. In this opportunity, Pragya Singh restarted her oath for the third time and completed without any further interruptions. But the opposition MPs again started shouting after she had finished, and the speaker again had to reassure them only the official name as per the Election Commission certificate will be kept in the records of the parliament.

It may be noted that her name is mentioned as Sadhvi Pragya Singh Thakur on the Election Commission website, and her affidavit also mentioned this name. Pragya Singh Thakur was elected to the Lok Sabha from Bhopal parliamentary constituency defeating Congress veteran leader and two-time Madhya Pradesh Chief Minister Digvijaya Singh. She is an accused in Malegaon blast case of Maharashtra in which six people were killed more than 10 years ago.