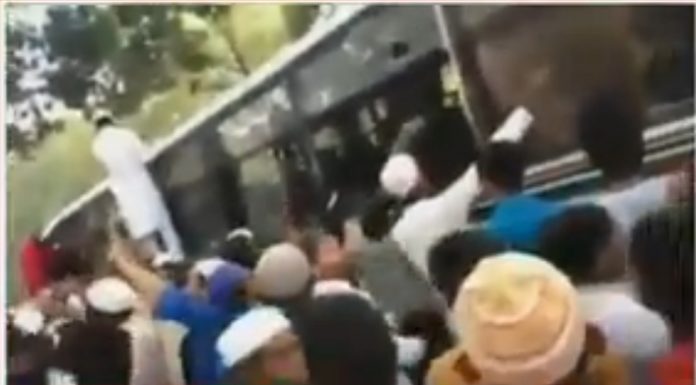 After a protest rally by Muslims held against the alleged mob lynching of Tabrez Ansari turned violent in Surat two days ago, a similar incident has been reported from Ranchi. And like Surat, the involvement of Congress leaders in the violent protest Ranchi has emerged.

According to a report by Republic TV, a protest was organised in Ranchi against the lynching of Ansari who had died in police custody four days after he was beaten by a mob for stealing a two-wheeler. In a video accessed by the TV channel, Congress spokesperson from Jharkhand Shamsher Alam was seen in on the stage. According to sources, he was trying to provoke the situation by creating communal tension.

Videos of the Ranchi protest venue show that a violent ruckus was created at the venue, and a mob had attacked a bus carrying 50 students. The mob had pelted stone at the bus, and some of them even tried to burn it. But few sensible persons present at the protest intervened and prevented a major tragedy from happening.

The video shows the bus being attacked by several people which was passing by the protest venue in Ranchi. According to reports, glasses of the bus were broken, and the mob also chanted communally sensitive slogans. Some of the mob talked about killing the students by torching the bus. There were two police jeeps present nearby but they didn’t take any step to stop the mob.

According to reports, the bus was carrying students of CIT Engineering College who were returning from appearing for their final semester exam in Doranda College. When the bus reached the protest venue, some people in the rally stopped it and proceeded to attack it. They also thrashed the driver of the bus. At that time some students inside the bus shouted that they are Muslims. Hearing that, the mob asked the Muslim students to get down from the bus and resumed vandalising the vehicle. According to the students, people in the mob were shouting ‘beat them’, ‘torch the bus’ etc. Someone even threw petrol inside the bus in an attempt to burn it. But at that moment some elder persons present at the protest venue stopped the mob from torching the bus. They also helped the bus to go away from that location.

The incident had happened on 5th July, and police have already started an investigation into the case. Congress leader Shamsher Alam’s name also has been mentioned in the FIR. Police have said that the speakers at the protest made provocative statements which led the crowd to become violent.  So far no arrest has been in the case, and police is studying the CCTV footage to identify the culprits. Police had registered a case against 8 known and 200 unknown persons in the case.