Hindu activists deny reports of Hauz Qazi Muslims ‘helping in installing idols’, say they were serving food to Hindus only for photo-ops

Hindu activists who were present at the consecrated ceremony in Hauz Qazi and those who were a part of organising the event have categorically denied these reports. 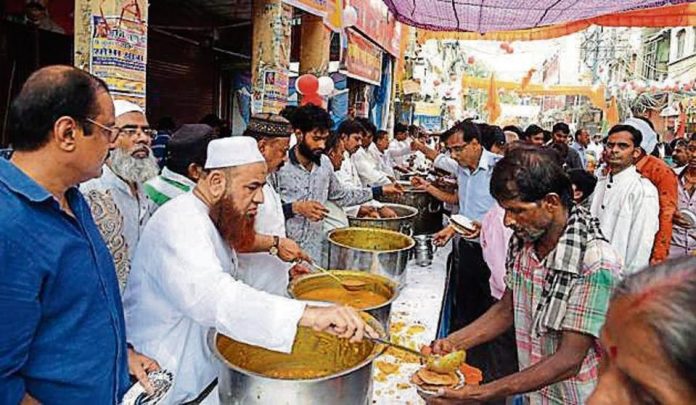 The Hauz Qazi temple desecration on 30th July shook the very conscience of the country. In the heart of Delhi, a Durga Temple was desecrated, idols broken, and according to the local Hindus, the Muslim mob responsible even urinated in the temple. After simmering communal tension, yesterday on 9th July, Vishwa Hindu Parishad organised an event for the ‘Praan Pratishtha’ of the idols and also organised a feast for the locals (Bhandara). While the chants of Jai Shree Ram reverberated in the bylanes of Chandni Chowk, one photo of Muslims serving food to the Hindus took the media by storm.

What was the event

The event, organised by Vishwa Hindu Parishad was for the consecrated of the idols that had been desecrated by the Muslim mob on 30th June. Essentially, without Praan Pratishtha, the idol itself does not get the divinity of an idol that is to be worshipped by Hindus.

The event, according to Hindu activist Aviral Sharma, was one organised wholly by VHP and was funded not only by the local Hindus of Hauz Qazi but Hindus from all over Delhi who were outraged at the Durga Temple desecration.

Along with the ritual of consecrated, there was also a Bhandara (feast) that was organised by VHP for the locals of the Hauz Qazi area.

The photo that went viral

While there were several photographs from the event that went viral when Hauz Qazi was saffronised, one photograph, in particular, took the Lutyens media by storm. The photograph was of 2-3 Muslim men serving food to the Hindus of the areas during the ritual.

The Media was immediately enthralled by the photograph.

CNN News 18 reported that the Muslims of Hauz Qazi were distributing food during the consecrated ceremony in a show of communal harmony.

Hindustan Times went a step ahead and reported that

The underlying theme of the media reports was that peace-loving Muslims of the Aman Committee had contributed in the consecrated ritual as a gesture of peace.

Hindu activists who were present at the consecrated ceremony in Hauz Qazi and those who were a part of organising the event have categorically denied these reports.

OpIndia spoke to Aviral Sharma, one such Hindu activist who was present at Hauz Qazi and has been closely associated with the organisation of Hindu events in the area.

Aviral Sharma said that the event was organised by VHP and the money for the event came from donations by Hindus. The Muslims of Hauz Qazi did not pay any amount towards the Praan Pratishtha event and hence, reports that they ‘helped install new idols’ in the Durga Temple are outright lies.

About the photograph that went viral showing Muslims of Hauz Qazi serving food in the Bhandara, Aviral said that on one table, the Imam of Fatehpur Masjid was standing and distributing water. Mostly, the Hindus of the area refuse to entertain. In fact, he said that the table at which Muslims can be seen standing and serving food was right in front of the Durga Temple and was set up by VHP itself.

Ayush Gupta, another Hindu activist present in Hauz Qazi chimed in and re-asserted what Aviral said. He maintained that the Muslims of the area had no contribution to the event.

Vishal Sharma, another activist said, “They were not even there during Praan Pratishtha. This is just to make sure the Media covers their side and not the plight of Hindus”.

Aviral Sharma claims that the Aman Committee members simply came to the table for photo-ops and then disappeared soon after a few photographs were clicked.