Prime Minister Narendra Modi was seen leaving the assembly hall almost immediately after his speech. As expected, Modi did not attend Imran Khan' speech at the UNGA. 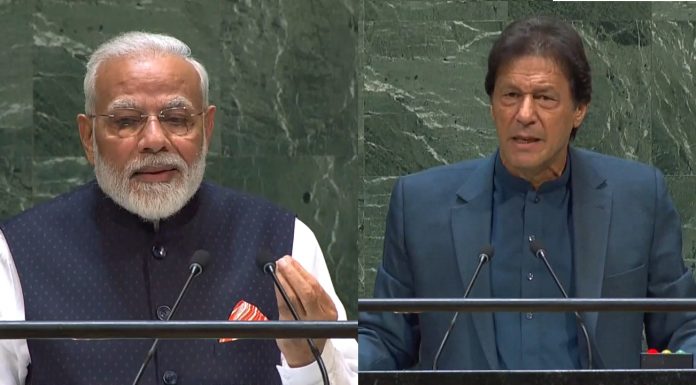 In his entire 20-minute address at the 74th session of the UN General Assembly (UNGA) on Friday in New York, Prime Minister Narendra Modi did not mention Pakistan even once but focused firmly on terror, saying lack of unanimity on the issue dents the basic principles that are the basis for the creation of UN.

His address was just a short while before his Pakistani counterpart Imran Khan was scheduled to address the UNGA. While Pakistan PM, Imran Khan, who is scheduled to speak after Modi, had vowed to “forcefully present” the Kashmir issue before the Assembly, Modi refrained bringing up the Kashmir contention during his speech.

Prime Minister Narendra Modi was seen leaving the assembly hall almost immediately after his speech. As expected, Modi did not attend Imran Khan’s speech at the UNGA.

According to his schedule, Modi will be attending two more meetings after which he will be taking his flight back to India.

The focus of Prime Minister Narendra Modi’s week-long visit to the US from Saturday to attend the UNGA was not terrorism but outlining the country’s larger role on the world stage and what it was doing for development, peace and security.

In his speech at the UNGA, PM Modi gave a strong message on terrorism to the world. Said terrorism is the biggest challenge today.

Stressing that India has always been a country of peace, PM Modi said, “India is a country which has shown the world not ‘Buddha’ and not ‘Yudhh’ (war). We have always given the message of peace. Hence when we raise our voice against terrorism, it has the sincerity and anger. We believe that it is not only one country’s responsibility but one of the biggest challenges faced by the humankind. The world is divided on terrorism. For the sake of humanity, the world must come together to fight against terrorism.”

Reminding the assembly of Swami Vivekananda’s inspiring speech at Parliament of Religions, PM Modi said that “125 years back, Swami Vivekanand gave the message of ‘harmony and peace’ to the world. India still has the same message to give.”