John Oliver’s anti-Modi show is full of lies, fake narratives and rumour mongering on everything from CAA-NRC-NPR, Modi to RSS

John Oliver is fundamentally an entertainer. He is not a legitimate journalist or an accredited academic

Priyanka Deo
Priyanka Deo is currently an executive producer and anchor at New India Junction. She holds masters’ degrees from Harvard, the London School of Economics and Political Science and the University of Southern California. 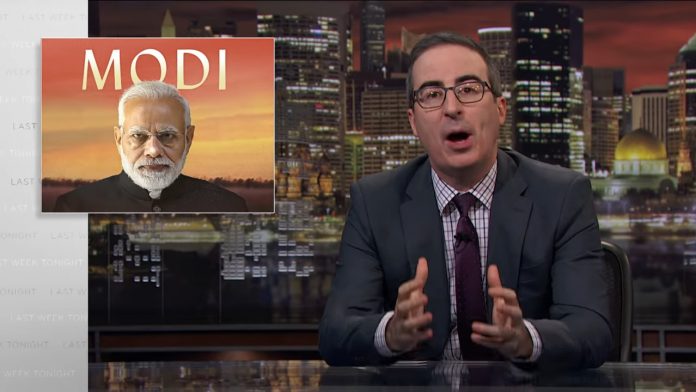 In his show Last Week Tonight that was uploaded on YouTube on Feb 24, 2020, comedian John Oliver recently had a trending show revolving around PM Narendra Modi and India. However, not only did he use an incorrect map of India, he also managed to use sources that had already been pointed out for inaccuracy and linked occurrences without proper context. Here are some of the inaccuracies of John Oliver’s narrative. Here are the inaccuracies of John Oliver’s narrative.

John Oliver referenced the 2002 Gujarat Riots where he pointed out how Modi was denied a visa by the United Kingdom and the USA. The Gujarat riots were sparked by a horrific incident- the death of 59 pilgrims trapped in a train returning from Ayodhya in 2002 which was burnt by Muslims at Godhra station.

First of all, the Supreme Court had appointed and monitored a Special Investigation Team to probe the riots. The team found NO connection- I repeat- NO connection between PM Modi- who was at that time chief minister of Gujarat- and the riots.

To add to that, Oliver added that “it was just not okay” for PM Modi be silent on this issue. But he has left out the fact that PM Modi has spoken on the Gujarat Riots. Modi has said, “Grief, sadness, misery, pain, anguish, agony—mere words could not capture the absolute emptiness one felt on witnessing such inhumanity.” He added, “In decisively confronting this great turmoil, I had to single-mindedly focus all the strength given to me by the almighty, on the task of peace, justice and rehabilitation; burying the pain and agony I was personally wracked with.”

John Oliver states that under PM Modi, there has been an ‘steady increase and escalation of persecution of religious minorities.’ He claims that PM Modi is an increasingly and I quote ‘controversial figure’ in India because of this.

However, statistics of the National Crime Records Bureau, communal/religious crimes show a steady and significant decline under the Modi government. In 2014 [when Modi first came into power] there were over 1200 incidents. As of 2018, the number is less than half of that. 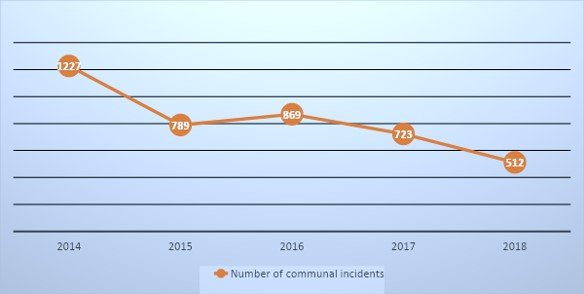 Moreover, the Modi government has made specific efforts to modernize education so that economically weaker Muslim children are better equipped and skilled for jobs. There are financial incentives for Muslim girls and even things like air travel for Hajj (that’s the Muslim pilgrimage to Mecca) was pointedly reduced under the Modi government. The cost? Previously Hajj cost approximately Rs. 97000 (appx. $1350 USD). Now the cost is only Rs. 20000; that is $278.69.

Speaking of persecuted minorities- Oliver highlights the misinformed liberal narrative of the CAA, NPR and NRC.

The Citizenship Amendment Act is aimed towards refugees. It does not affect citizens. It actually helps refugees out- fast tracks the citizenship process of persecuted religious minorities from Afghanistan, Bangladesh and Pakistan. A mention of these three countries was conveniently missing from Oliver’s piece.

The logic for why Muslims are not included in the list of religiously persecuted minorities is simple. The CAA only applies to refugees in three countries- Pakistan, Afghanistan and Bangladesh. These countries are Islamic nations- therefore, Muslims in these countries are not the persecuted minority. This is an internationally recognized fact. If John Oliver is speaking about making Muslims stateless, this is absolutely an unsubstantiated statement. The CAA has nothing to do with Indian citizens; including Muslims carrying an Indian passport and paperwork. Second, Muslims can still come to India and seek citizenship under the normal provisions, just any other legal foreigner seeking citizenship in India. CAA does not bar Muslims, or anyone, from becoming Indian citizen.

The next thing John Oliver does is incorrectly tie the NPR and the NRC to the CAA.

The NPR is a regular exercise of the country- very similar to how the USA Census works. The last NPR was conducted in 2010 – by the way, this was when PM Modi was not even the prime minister yet. The purpose of the NPR, like census information gathering in the USA, is to ensure that India, like other countries has a record of its demographics and citizens. With this information, the government is able to serve targeted, more effective services to the people.

Read- An open letter to John Oliver, the host of Last Week Tonight on HBO!

Regarding the NRC- John Oliver also mixes it in with the CAA and NPR. However, he leaves out the very simple fact that there has been no NRC officially announced. This means that NRC does not exist.

So why does NRC even come up?

Misinformed CAA protestors are mixing it with the NRC of Assam that was updated on the instructions of the Supreme Court- and this was because the state of Assam has constantly dealt with the issue of illegal immigration for decades. Moreover, original NRC was prepared way back in 1951, under the orders of Jawaharlal Nehru government, which was only updated recently as per the provisions of Assam Accord, signed by Rajiv Gandhi led Congress government in 1985.

As for detention camps, they were set up by the Congress government to keep persons facing prosecution for being illegal foreigners, and such camps are operating in Assam for more than a decade. What John Oliver is trying to incite is that Muslims could be put in detention camps because of the NRC. The actuality is that there are no detention camps under PM Modi in the country for this purpose.

Here are the other flaws of John Oliver’s piece.

Next, all of Oliver’s video reporting footage is either from NDTV- that’s a well-known left-leaning television channel in India or from Al Jazeera- who is funded by the state of Qatar and has been criticized internationally for biased reporting. The remaining footage Oliver uses comes from BBC; a channel that has been repeatedly criticized for covering conflicts in South Asia with an anti-India bias.

Oliver also talks about RSS and claims that the organization is inspired by Adolph Hitler. The Nazi ideology was to conquer all foreign lands and eliminate the Jews. Oliver is inciting that RSS ideology is similar to that of the Nazis towards Muslims. Since PM Modi is affiliated with the RSS, he wants to ‘wipe out’ Muslims.

This is so uncorroborated that it’s not even funny. The reality is that official 2018 estimates show a significant percentage increase of the Muslim population in India. Additionally, PM Modi has been verbose and pro-active on his non-partisan stance. His huge successes in welfare schemes like implementing electricity and LPG connections are available for everyone without discrimination.

Furthermore, under PM Modi, India has the strongest bilateral relations than ever before with Islamic countries like Palestine, Iran, Saudi Arabia, the UAE and Jordan. The Maldives and Bahrain have even bestowed their highest civil honours on PM Modi. Over the last five years, many Indian prisoners have been released by Saudi Arabia, Kuwait, Qatar and Bahrain under PM Modi. Business relations with Bangladesh have also significantly improved.

The thing to keep in mind here; John Oliver is fundamentally an entertainer. He is not a legitimate journalist or an accredited academic. His show comprises of simplified one liners without full context for a niche audience. This is not just this particular show. This is all of his shows. Oliver puts out an entertaining show and people watch. That’s his job. But it becomes a problem if you start believing it as fact. It is integral to deep dive into statements made and the evidence used before formulating an opinion. This is not just for John Oliver, but for any content consumed. As for John Oliver’s show; consume a comedian’s content in the way that is meant to be consumed. Comedy.

Priyanka Deo
Priyanka Deo is currently an executive producer and anchor at New India Junction. She holds masters’ degrees from Harvard, the London School of Economics and Political Science and the University of Southern California.