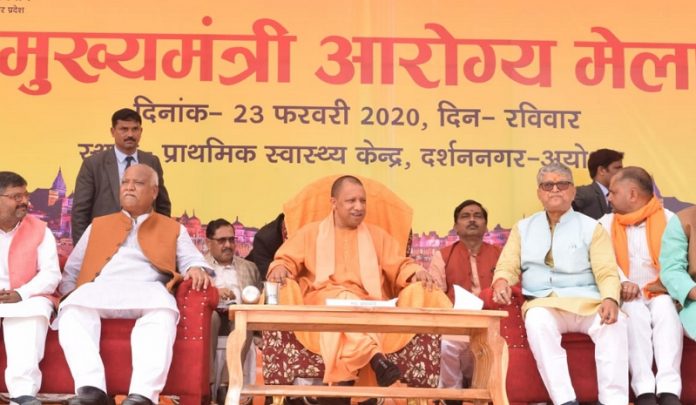 The Mahant of Gorakhnath Muth said, “Our generation is fortunate, we all saw the Ram Janmabhoomi movement, we also got the opportunity to, directly and indirectly, participate in the movement and we will also see the construction of the grand temple of Lord Rama with our own eyes.” He made the remark after visiting Ramlalla and Hanumangarhi.

The UP chief minister made the comments in Ayodhya on Sunday, on his first visit to the temple town after the Supreme Court verdict on the Ram Mandir – Babri Masjid dispute. He inaugurated the Mukhya Mantri Aarogya Mela, a health fair, in Ayodhya, after which he attended a gathering of Hindu seers where he made the comments.

Commenting on the apex court’s verdict paving the way for construction of a Ram Mandir in Ayodhya, the chief minister said, “The Supreme Court has shown its judicial power to the world by its verdict over the issue of Ram Mandir.”

“I always told saints of Ayodhya to have trust in Prime Minister Modi as under his leadership, we will achieve our goal of having a Ram Mandir in Ayodhya,” he added.

The Gorakhpur Muth, with which Yogi Adityanath is associated, itself has contributed significantly towards the Ram Janmabhoomi Movement. Three generations of the Gorakhnath Muth have made significant contributions towards the return of Ramlalla to Rama Janmabhoomi. Mahant Digvijay Nath conceived the idea, Mahant Avaidyanath nurtured it and the dream will be fulfilled by Mahant Yogi Adityanath as Chief Minister.