OpIndia
Home News Reports Saba Naqvi: The line between being a journalist and being an AAP cheerleader
News Reports

Saba Naqvi: The line between being a journalist and being an AAP cheerleader

The news of controversial journalist turned AAP leader Aashish Khetan threatening journalists online is still fresh in our minds. When some journalists tweeted a link to a very damning report of the corrupt practices being followed by AAP the party and also its Government, Khetan lost his cool and admonished them and even went as far as threatening them. Perhaps the realisation that this information will open a pandora’s box was what led to the outburst.

One of the allegations made in the report was that AAP had appointed as many as 25 journalists on the governing bodies of  28 colleges funded by the government affiliated to the Delhi University. They achieved this by dissolving the governing bodies despite opposition from the university and hundreds of non-permanent teachers. Apparently, most of them were working journalists, many of whom report and write about AAP. The list of these journalists got leaked online and can be verified from here (some of them have rejected the appointments): 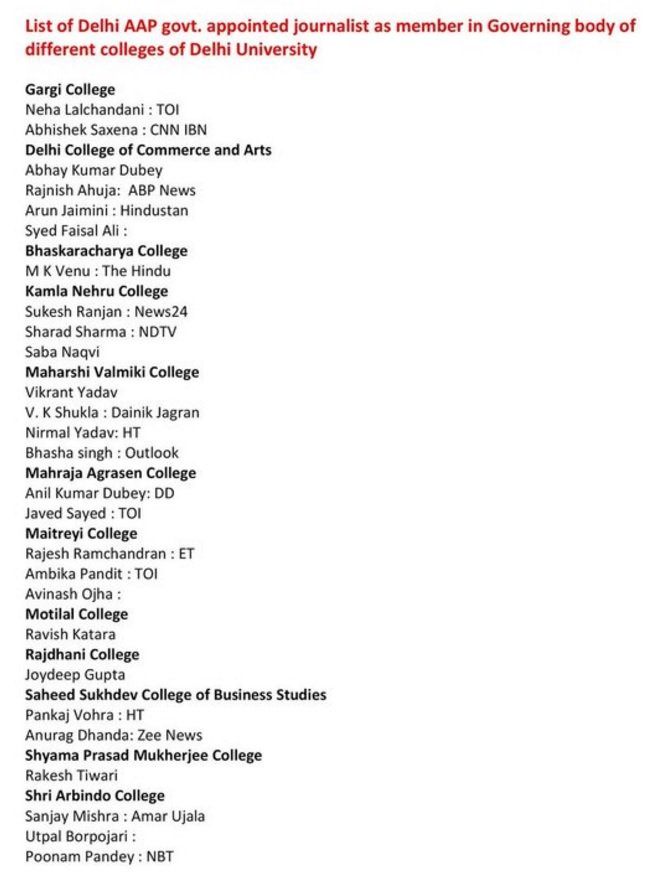 As columnist Anand Ranganathan noted on twitter, most of the names of journalists are mentioned as “recommendations” but it seemed that the recommendations were accepted in totality. Two very prominent names on the list were those of journalists M K Venu, founding editor of thewire.in, a leftist site, and that of Saba Naqvi, a journalist and TV panelist. While Mr M K Venu rejected the appointment, Saba Naqvi happily chose to accept AAP’s gift to her.

What might have been the reason to give Saba Naqvi this honour? Surely it had nothing to do with her hagiography of the messiah of Delhi, Arvind Kejriwal? The other ex-journalist who wrote on AAP, Ashutosh is already in AAP. After the leak that Saba Naqvi had indeed been appointed on a Governing council, old media followed the code of Omerta, with no one reporting this news, while social media began asking tough questions of this journalist. She had remained silent when she was appointed, but now, the justification given by her on twitter, after she was questioned, was this:

Has a journalist, who is supposed to be an independent, unbiased reporter, openly accepted that her single-minded goal is to thwart the RSS? Is this the role of a journalist? Can the bogey of RSS be raised to justify the acceptance of a political handout? The appointments were recommended as early as  July 2015. It is almost a year now. Did we see any disclosure or announcement from Naqvi for so long, before this leaked out?

It is not illegal for anyone to accept political handouts and largesses. Many parties do it and have done it in the past and so also journalists have also accepted the same. But once journalists openly admit that their agenda is not reporting, but is rather to keep a section of the society at bay, for which they have a visceral hatred, then the so-called journalism of such journalists must be placed under scrutiny.

Take for example this flowery “tribute” to Arvind Kejriwal and AAP offered by his co-opted political appointee, Saba Naqvi. This was written long after the appointment to the Governing Council.

Is this a fair, unbiased, honest assessment of AAP then? Or is this a piece which is written out of gratitude to dear leader who rewarded a hack? The entire article only speaks of the glories of AAP rule, some maybe genuine, some maybe over-hyped. A rally in Punjab means AAP gets entry into “new terrain”. The odd-even scheme which failed in reducing pollution is hailed for reducing traffic and “the special ability of Kejriwal and his young party to do unconventional things“. The piece is littered with praise and adulation for the great leader.

Naqvi signs off the piece as “Delhi-based author and journalist”, no disclosure about her being appointed by Arvind Kejriwal, the person who she is deifying, on the governing council of a college. This is how journalism works in India.

Or take the time when AAP’s nationwide ad frenzy had created a furore. For days on end, Delhi based AAP advertised in virtually every part of the country, with double-page “advertisements”. The ads, were designed to give the effect that they were news reports, whereas they were actually advertisements. Eventually it was revealed that the Delhi Government had splurged over Rs 15 crores in 3 months on this blitzkreig. And Saba Naqvi came to the defense of her benefactor AAP:

Really ironic to see those who are fine with BJP and Modi ads get into a state about AAP ads. 2014 most expensive media campaign!!!

Firstly, the use of whataboutery as the only means to defend her benefactor Kejriwal.

Secondly, comparing the advertisement expense of a national party, to that of a regional party which has electoral presence in only 2 small Northern Indian states.

Thirdly, the ad expense during a national election campaign being compared to the ad expense when there are no state elections coming up in which AAP is contesting.

Fourth, the AAP ads were paid for by the Delhi Government, i.e. by Delhi’s common taxpayer, whereas BJP’s 2014 ad campaign was paid for by the party, not from taxes collected for the welfare of the state.

To a layman, the argument put forth by Naqvi may seem illogical, but when you consider she has been benefited by AAP, it all makes sense.

There seems to be a growing conflict of interest situation. Naqvi praises Kejriwal in her book, gets a plum posts, goes on to further praise Kejriwal. All fine, but until you consider she is supposed to be a journalist. Ironically, this is what she wrote on “Augusta Patrakars” (she spells Agusta as Augusta):

We can question the accepted practice in the media of accepting hospitality from anyone, but just the act of going on a sponsored trip does not make a journalist corrupt. Personally, no one ever offered me such trips as I am unlikely to accept a corporate sponsored trip. But that’s me and my personal code.

Seems she broke her personal code for AAP? Or are only foreign trips included in her code? As this secret is now out, that she is one of the journalists who were rewarded by AAP, we must now wait and watch how many media houses drop her from their shows, their columns, or at least educate the reader about her background. And we must also wait for Naqvi, to claim that she is being attacked by Hindutva misogynistic bigots for being a free-thinking muslim woman, and not for her gross impropriety as a journalist.