Sagarika Ghose gets slammed for her insensitive tweet on the Gandhis

Controversial journalist Sagarika Ghose who currently works for The Times Of India seems to have almost developed a habit for getting into needless controversies. During the recent political fiasco in Tamil Nadu she had written a cringe-worthy article stereotyping South India under the facade of humour for which she was heavily panned. Today, she got panned again.

Congress spokesperson Randeep Surjewala notified the press that the Congress VP Rahul Gandhi would be accompanying his mother Sonia Gandhi abroad for her medical checkup.

Sonia Gandhi is travelling abroad for health check-up.Rahul Gandhi shall travel there&accompany her on the return journey: Randeep Surjewala pic.twitter.com/kmEPGC8Im0

Even though the tweet amply stated that he was traveling with his mother on serious business, it didn’t stop Sagarika Ghose from attempted her infamous humor: 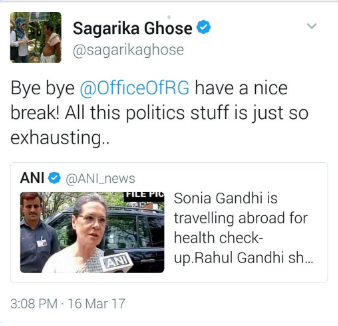 It is common knowledge that one of the most recurring jokes on Rahul Gandhi are based on his frequent foreign travels but Sagarika clearly didn’t display enough understanding to realise that this time, the prince was attending to a personal pressing matter, like every son should.

This understandably drew the ire of Congressies and their political allies:

That’s a low blow. His mother isn’t well & he’s flying out to accompany her back. Catch him on a beach or at a party & then take this dig. https://t.co/GSu3AFDpYr

He should abandon his ill mother? All sacrifices expected from his family only? Forgot that he lost his father &grandmother for this nation? https://t.co/qkh5PkAsuw

Absolutely not. Not the case in any part of the world. Politicians are not superhuman & not all politicians with families are crooks! https://t.co/mkuMteSeQs

Not surprisingly even Journalists lashed at Sagarika for her misfired joke:

He keeps travelling for undisclosed vacations all the time. To mock him then maybe okay. But when someone’s ill, it’s distasteful trolling! https://t.co/1emjoieDkw

If that’s your view, why have you said you’re deleting your original tweet? Stick to it then. https://t.co/nQEUB4MZ5U

Also as a touching gesture the Right Wingers who are on any day opposed to Rahul Gandhi and mock his policies, condemned her tweet, thereby furthering the idea that differences should always run skin deep and not get personal:

Being with one’s mom is not having a break. Mock him when he goes on vacation not now https://t.co/iSmCzlbFsh

Shame on this crass inhuman tweet from a senior jourbo, trolling a son trying to take care of his sick motherhttps://t.co/kCVAkSUeD4

After facing all the outrage, Sagarika then deleted her tweet and  managed an apology of sorts:

Goodness, what a barrage of reactions is coming my way. Profuse apologies if my tweet hurt sentiments, taking it down speedily.