More
Home News Reports Full story behind the viral photo of a teary re-union between the grandchild and...
News Reports
Updated: 23 August, 2018 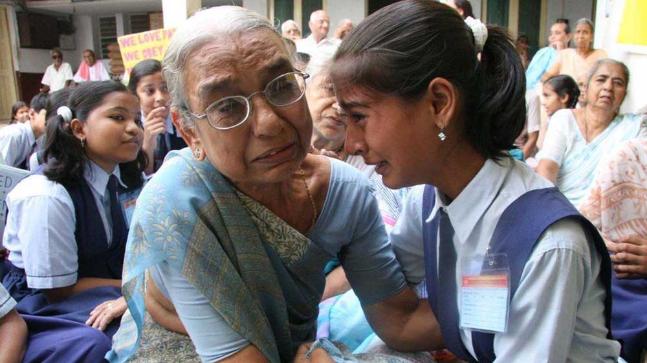 A heart-melting photo of a crying old lady along with a schoolgirl went viral grabbing attention of one and many on Twitter.

According to several posts doing rounds on the social networking site, the viral picture is of a girl who ended up finding her grandmother in an old age home after she visited it as a part of her school tour. The parents had lied to the child and told her that her grandmother was living with relatives when in reality they had dumped her in an old age home. This story which was doing the rounds said that the unanticipated reunion of the grandmother and the child made them break down and that over-whelming moment was captured by a photographer. But, however, there is more to this story, reports The Indian Express.

A school organised a tour to an old age home and this girl found her grandmother there. When she used to ask her parents about the whereabouts of grandma, she was told that she has gone to meet her relatives. This is the society we are creating…#Heart_touching.. pic.twitter.com/fHRFVFAFyx

According to a BBC report, the picture that is going viral was initially photographed by Kalpit S Bhachech way back in 2007, which has caught everyone’s attention now, after almost 10 years.

However, after interviewing the duo lately, BBC Hindi came out with the complete story according to which Bhakti, the schoolgirl in the picture, told the news channel that firstly this image is a decade old and though it is currently going viral with a narrative that her grandmother Damyanti behen was left in the old age home, in reality, she was staying there by choice.

Moreover, she also said that it was because of her emotional nature that she broke down and not because of anything else. She furthered that she was aware of her grandmother staying at an old age home but not sure which one, hence the emotional outburst.

Why has the pictured resurfaced 10 years later?

According to Kalpesh S Bharech, the photographer who clicked this picture almost a decade back, currently based in Ahmedabad, Gujrat, working with Divya Bhaskar, on the occasion of World Photography Day, ahead of 19th August, BBC Gujarati had asked journalists from across the state to share the best photo stories of their career.

When Kalpesh S Bharech shared this particular story with all his pictures, social media quickly picked it up and, hence, the story went viral.

India Today shared the photographer’s sons Facebook post praising his father’s exemplary work which has currently, after almost a decade, resurfaced and went viral on Twitter.