To add insult to injury, former President Pranab Mukherjee has hailed the EC for conducting the 2019 Lok Sabha elections ‘perfectly.’

Ever since exit polls have predicted a second consecutive term for BJP-led NDA government in the 2019 Lok Sabha elections, opposition parties seem to have lost their sleep and peace. RLSP leader Upendra Kushwala’s frustration is evident as he accused the BJP of trying to rob votes through EVM and called out the voters “to be ready to pick weapons to stop the loot of votes.” Kushwaha’s call for violence is by far the worse attack by the opposition that has since united to put in a concerted effort to discredit the Electronic Voting Machines (EVMs) used in these elections.

In the latest bid, 21 opposition parties today assembled at the Constitution Club of India. They proceeded to meet the officials of the Election Commission of India (EC) to submit a memorandum duly signed by their party representatives. 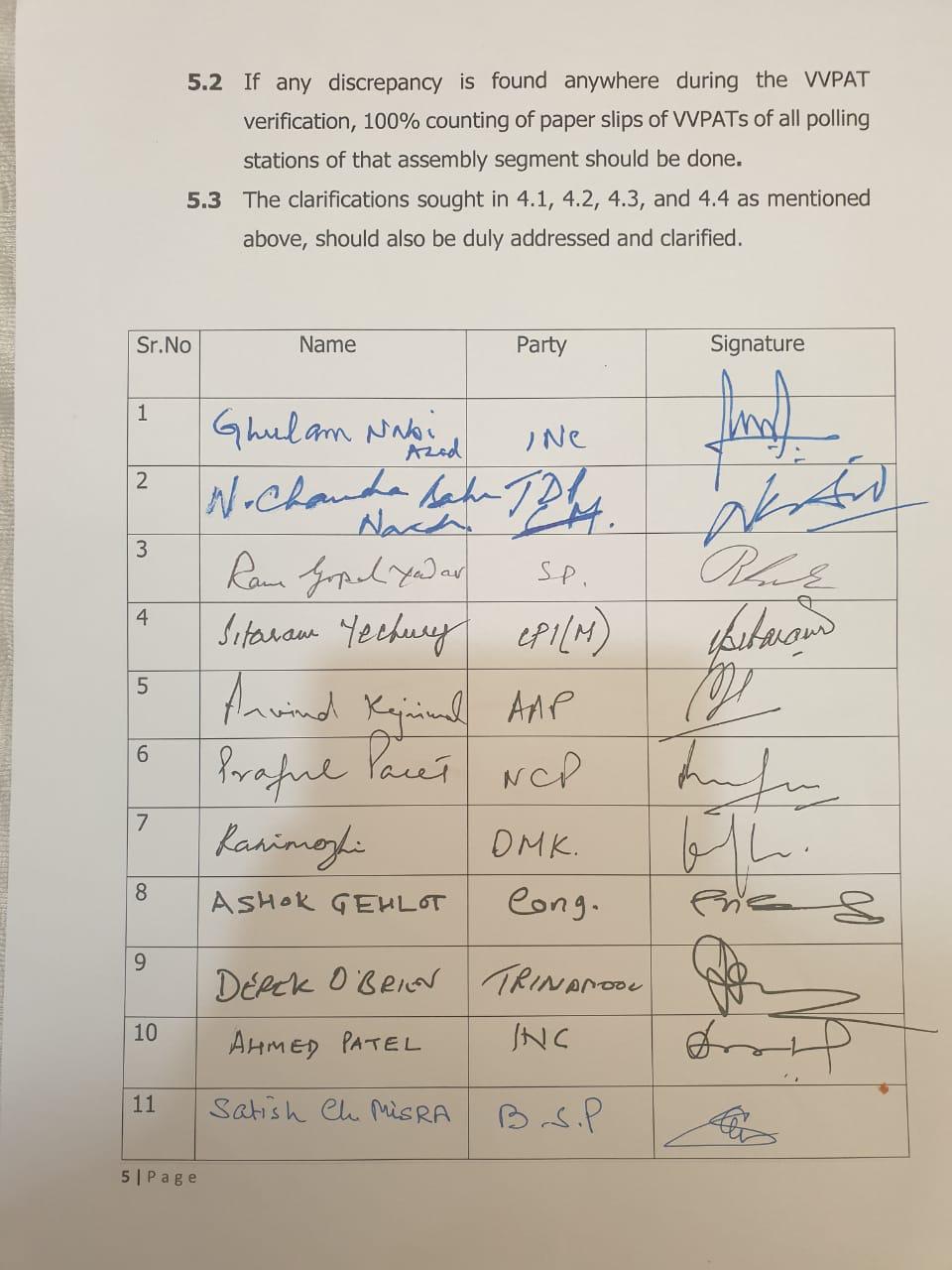 Through the memorandum to the EC, the opposition claims that EVM guidelines were flouted during the recently concluded Lok Sabha elections. They demanded if any discrepancy is found during the VVPAT verification then 100% counting of paper slips of VVPATs of all polling stations of that Assembly segment should be done.

Unnerved by the exit poll predictions, bigwigs like Abhishek Manu Singh, Ahmed Patel, Ashok Gehlot and Ghulam Nabi Azad of the Congress, Sharad Pawar of the Nationalist Congress Party (NCP), TDP’s Chandrababu Naidu, Satish Chandra Misra of the BSP, Sitaram Yechury of the Communist Party of India (Marxist), D Raja of the Communist Party of India (CPI), Derek O’Brien of the TMC and Sanjay Singh and Arvind Kejriwal of AAP along with others met to strategise their plans to discuss the post-poll scenario.

Addressing the media after meeting the EC, Azad highlighted the issue of EVMs “being moved around.”

While Abhishek Manu Singh said, “They (EC) told us that they have an open mind about it (the issue). In the past 1.5 months, we have raised the same issues in writing. Now we have asked the EC why they haven’t responded. Strangely, EC heard us for almost an hour and they assured us they’ll meet again tomorrow (Wednesday) morning to consider primarily these issues. We are only asking for counting of 100% of VVPATs. Why should you have them as decorative pieces after finding a sample problem?”

Moreover, Naidu said the opposition leaders were asking the EC to “respect the mandate” as people’s mandate cannot be manipulated. “We’ve been fighting continuously,” he added.

He further went on to say that tallying of EVMs and VVPAT slips was like taking a blood sample for the body to check if there is any “pollution” in the body. He added if the blood reports aren’t acted upon then there will be “cancer.”

To add insult to injury, former President Pranab Mukherjee has hailed the EC for conducting the 2019 Lok Sabha elections ‘perfectly.’

What is more appalling is that despite the Supreme Court dismissing the petition to seek 100% matching of Voter Verifiable Paper Audit Trail (VVPAT) slips with Electronic Voting Machines (EVMs) during the counting of votes on May 23, the opposition parties are in no mood to relent from cooking up unnecessary controversies.

Perhaps ‘respecting people’s mandate’ is subjective to their satisfaction and proportionate to their win!

However, all the speculations and bickering will soon be put to rest as the curtains to the election results are drawn on May 23.