More
Home Opinions The difference lies in what holds BJP and Congress ecosystems together
Editor's picksFeaturedOpinionsPolitics
Updated: 25 May, 2019

The difference lies in what holds BJP and Congress ecosystems together

This is not to say that BJP doesn’t have its own PR machines. Of course, it does. Everyone has PR machines. But who has the volunteers? Because people vote. Machines don’t.

The BJP’s stunning 303 seat tally has left the liberal ecosystem immobilized for the moment. Not even quivering in pain, but knocked out cold. Seriously, how did BJP even achieve this? In the last five years, the BJP has recovered in Uttar Pradesh, captured Haryana, Maharashtra, Assam, Tripura and much of the North East. In this election, they have roared into Bengal and Odisha and have delivered the first punch in Telangana. The BJP wave has swept also the southern tip of Karnataka where the party barely even existed five years ago.

How are they doing this? How come BJP has been able to use its five years in power to expand relentlessly? Before that, Congress ruled for ten years. Can anybody name any stretch of the country where the Congress party rebuilt itself during the UPA decade? Or even made a serious effort?

Surely, there is a difference between how the two parties and their supporters think. Let me explain what it is.

Two examples will make this clear.

A few days back, Yogendra Yadav, stung by the exit polls and in a moment of extreme mental agony made the remark that “The Congress must die”. 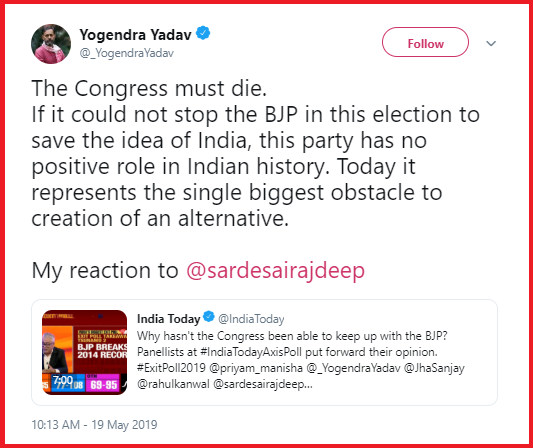 Now, we are all familiar with Mr Yogendra Yadav’s political loyalties and his illustrious career within the liberal ecosystem. And yet, so fierce, so vicious and so emotional was the reaction from his friends and well-wishers that he spent the next three days clarifying his words again and again. Above all the fact that he has nothing against the Congress leadership.

Watch how Lutyens deals with murmurs of discontent.

Rajdeep asks if Yogendra will clarify.

And then just see Yogendra is groveling about how his words had nothing to do with anti-Congressism, nothing against Congress leadership, etc etc. pic.twitter.com/2L3YxHSt6W

Yogendra Yadav  ji, you are an old man with a big ego and many failures in life. I hope your friends forgive you.

This happened to BJP’s seniormost leader in (active) politics at the time. To the man whose Rath Yatra built the BJP. At a time when BJP was at one of its lowest ebbs.

Because no matter how badly the BJP’s fate hung in the balance, the ideology mattered more.

Compare that to how the ecosystem is treating an old hand like Yadav for one line of heresy. Yadav was taking an ideological viewpoint, one that I may not agree with, but an ideology nevertheless. In fact, he was talking about the party getting in the way of ideology. But “liberals” couldn’t care less about ideology.

Because modern Indian liberalism is all about following a divinely appointed hereditary monarch, staying invested in that ecosystem and reaping benefits from it.

This is how the word “liberal” became an insult. Because Indian “liberalism” is a cover story, a PR spin on the worst form of cronyism and regressive politics.

What is liberalism supposed to be about? About having an open mind? Well, who wouldn’t approve of that?

Now tell me this: who do you think were the real open-minded ones in this election? They are the ones who dumped their traditional caste-based parties and voted for an idea.

Who is a liberal? Is it really those who vote for Akhilesh Yadav because he is a Yadav or those who vote for Mayawati because she is a Jatav? Or those who vote for Ajit Singh or his son because they are Jats? Do you know that BSP has never so much as released a manifesto in its entire existence as a political party (yes, it’s true!)? Indeed, Mayawati has never promised anything to anyone. Only demanded support from members of her caste group. Are those who answered that call really “liberal”?

In Karnataka, the Congress had called PM Modi a “North Indian import”. Voters rejected those who defined Kannadiga pride as a form of hatred towards people of other states. People of Karnataka wanted to define Kannadiga pride through love, not hate. In Bengal, voters taught a lesson to TMC for their racist rhetoric against “non-Bengalis”. In Maharashtra, Raj Thackeray was smart enough not to contest but his speeches were much sought after by the liberal elite.

This is senior leader Mallikarjun Kharge, the de facto leader of opposition in the previous Lok Sabha, telling Home Minister Rajnath Singh on his face that he is an “Aryan who came from outside”.

Yesterday, Mallikarjun Kharge lost from Gulbarga, the first election he has lost in his life.

Lalu Yadav was convicted in a 1000 crore scam. They still thought he would be a big player in Bihar simply because of his last name. The people have spoken. RJD has won a grand total of ZERO seats.

Let’s take an actual “liberal” value. Like gender equality. Or dignity for homosexuals. Do you think that a voter who defines their entire existence by their XYZ caste identity is more likely to believe in rejecting regressive views on the role of women? Obviously not.

So Indian “liberalism” is all about staying invested in a family and reaping the benefits. They support the family because they know it is the glue which keeps the party together. And they are right about that.

And in the new India, caste identities are getting progressively dismantled. This is what the BJP tapped into. That’s how the BJP managed to get 50%+ of the vote almost everywhere from Karnataka to Maharashtra to Uttar Pradesh and Bihar. Why not? What could stop them? The other side had no ideas, just caste arithmetic.

What keeps the BJP juggernaut together and drives it? Ideology.

This is not to paint some rosy picture of the BJP. Every party has problems. And when you are as big as the BJP, there are going to be big faults.

What I am saying is that when you come down to the level of an ordinary BJP supporter, you will discover something very different from an ordinary “liberal”.

Ideology, not some narrow caste or regional identity. And new India cares about ideas and not your father’s name.

I’ll give you one more example. Remember how BJP supporters used to dominate social media? That’s when social media was small and most people didn’t realize it had serious PR potential.

Observe that at the time Congress had many many more voters than BJP, but it was the BJP supporters seeking out corners of the web and speaking their mind. Trying to get their ideas on any platform they could find. The comments sections on news websites. On Twitter and Facebook. Before there was Facebook, there used to be Orkut. BJP supporters formed groups on it and tried to spread their ideas. Most of it had little to no impact. But the ideological commitment kept them trying.

Eventually, the other side caught up on social media. When did that happen? After they lost 2014 and realized social media was going to be huge. Then they brought in the big money, founded a string of liberal “news websites”. All with a similar genre of names too, as you would expect from sock puppets. They realized social media was needed to create hawa and so they installed blowers to create that hawa. From standup comedians to “journalists” imported from America, everyone needed to be paid big bucks to blow that hawa. Because where would the liberals find even one self-motivated foot soldier, who without any organization or sponsorship, would freely contribute their time and energy for a cause?

This is not to say that BJP doesn’t have its own PR machines. Of course, it does. Everyone has PR machines. But who has the volunteers? Because people vote. Machines don’t.

But there is this thing about new India. They were swept away with real ideas from real people, not blower ki hawa.

Ten individuals have been arrested in Gujarat on accusations of murdering Gaurakshak Hardik Kansara in Valsad district.

The media will choose to wait strategically till it reaches Gujarat, for more effect. And the third wave begins “officially” when the spread reaches Uttar Pradesh. And then, it will all be the fault of “Gaumutra.”

Taliban rule: When Hindus in Afghanistan were forced to carry yellow badges like Jews in Nazi Germany

In a bid to undo years of suffering and persecution, the Indian government had issued long-term visas to 700 Hindus and Sikhs from Afghanistan in July last year.

On World Refugee Day, read how Germany, Sweden, and India bore the brunt of incoming refugees

While the United Nations has been advocating the inclusion of refugees, the question remains whether the incoming migrants are willing to assimilate with the culture of the host nation.

Twitter rewards an Islamist org, set to be banned by India, with a verified blue tick: Here is what PFI has done in the...

It is worth mentioning that the radical Islamic organisation Popular Front of India has been accused of involving in perpetrating terrorist attacks in India and carrying large scale communal riots in different parts of the country.

Republic TV issues statement over Arnab Goswami’s disappearance from the news network: Here is what they said

Arnab Goswami was last seen on May 2 during a discussion on West Bengal assembly polls. He will make a return on Monday.
Read more
News Reports

OBC benefits for Muslims: How WB Police’s recruitment drive has exposed how parties found a way to make religious reservations

The drive was meant to fill vacancies in the OBC-A category in the state. The list showed that apart from one or two individuals, all of them were Muslims.
Read more
News Reports

Who is Vishal Jood? An Indian national arrested for taking on Khalistani extremists in Australia

Vishal Jood, the 24 yar old from Haryana, has been languishing in a jail in the down in the country for two months now.
Read more
Opinions

With 1500 squatters kicked out from Lutyens bungalows, it might explain why its always Modi vs All

A dissertation paper by a student at TISS-Hyderabad has come under the scanner for calling Kashmir "India occupied Kashmir".
Read more
- Advertisement -

Saudi Arabia to revise school books that referred to non-Muslims as ‘apes’ and ‘swines’, set to bring in reforms to make the country ‘less-intimidating’

Taliban rule: When Hindus in Afghanistan were forced to carry yellow badges like Jews in Nazi Germany

On World Refugee Day, read how Germany, Sweden, and India bore the brunt of incoming refugees