Cyclone Fani, an extremely severe cyclonic storm hit Odisha on the East coast on Friday at an alarming wind speed of 175-kmph (maximum). 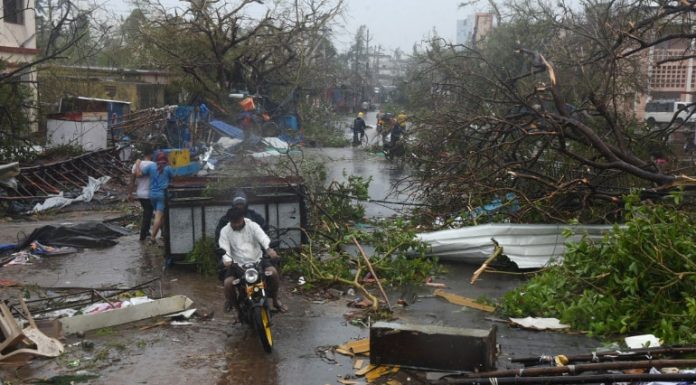 The UN Office for Disaster Risk Reduction (ODRR) has praised India for achieving a minimal loss of life from Cyclone Fani. The global organization credited the Indian Meteorological Department for this feat on Friday.

“They seem to have done a very good job in terms of minimizing the possibility for loss of life. The almost pinpoint accuracy of the warnings, the early warnings from the IMD, allows them to conduct a very well targeted evacuation plan which resulted in 1.1 million people mainly moving to about 900 cyclone shelters,” said Denis McClean, a spokesperson for the ODRR said at a UN news briefing in Geneva.

Cyclone Fani, an extremely severe cyclonic storm hit Odisha on the East coast on Friday at an alarming wind speed of 175-kmph (maximum). Fani is considered as the strongest storm in about 20 years. The destructive storm has claimed 10 lives when reports last came in today.

The Special Representative of the United Nations Secretary-General (SRSG), Mami Mizutori said that India’s policy of zero casualties is a major contribution to the Sendai Framework. The Sendai Framework for Disaster Risk Reduction 2015-2030 is a 15-year voluntary, non-binding agreement. According to this framework, the state has a primary role in mitigating disaster while the responsibilities are to be shared among other stakeholders.

In the wake of the disastrous storm, UNICEF had raised concerns about the children in the cyclone-prone areas. It had expressed its worry on climate change the devastation would cause them. While India has been hit by Cyclone Fani, Mozambique was hit by back-to-back cyclones in March and April causing serious damage to the lives of the children in the country.

“Children will bear the brunt of these disasters. In the short term, the most vulnerable children are at the risk of drowning and landslides, deadly diseases including cholera and malaria, malnutrition from reduced agricultural production, and psychological trauma all of which are compounded when health centers and schools are impacted,” UNICEF Senior Adviser on Climate Change, Gautam Narasimhan said.

Narasimhan asserted that in the long term, cycles of poverty would continue to hinder the capacity of communities to adapt and mitigate natural disasters. Cyclone Fani will move to the north-northwest parts and is expected to hit Bangladesh where coastal flooding is expected to cause damage.

Earlier we had reported how Cyclone Fani is expected to escalate into an extremely severe storm and would move towards the north-west in India’s eastern coast until May 1. Tamil Nadu, Andhra Pradesh, and Odisha have been warned to brace for extreme weather conditions including strong winds, heavy rainfall, and rough seas.