The Resident Doctors' Association (RDA) at AIIMS, too, has issued a statement over the matter. Demanding the immediate arrest of the perpetrators, it also requested doctors to suspend routine activities and join the protest.

On Monday night, a mob of nearly 200 people attacked doctors and interns at the NRS Medical College and Hospital in Kolkata after the death of Mohammed Sayeed. While doctors claim that he was 85 years old and died due to natural causes, his family members think otherwise.

Matters escalated after family members assaulted the doctors and soon, the hospital premises had turned into a battlefield. Many were thrashed and one intern suffered severe injuries and continues to be in a critical condition. The critically injured doctor has been identified as Paribaha Mukherjee.

Meanwhile, the junior doctors at NRS Hospital are continuing with their protests over the matter. Normal services haven’t resumed yet. Their demands remain simple, ensure the security of doctors at Hospitals and punish the guilty. Junior doctors at other hospitals in the state have joined the protest too in solidarity with the doctors and interns at NRS. Services have been disrupted at various institutions.

The demands for resumption of duties include a visit to the injured junior doctor’s family by the Chief Minister herself and a meeting with the representatives from all medical colleges to ensure that these incidents are not repeated in the future. The protesting students also demand that apart from providing them with documentary evidence regarding details of action against the perpetrators on Monday night, an inquiry be also conducted against the inaction of the Police when the mob was attacking the doctors.

The Resident Doctors’ Association (RDA) at AIIMS, too, has issued a statement over the matter. The statement said, “We are grieved and enraged at the exasperating indifference of the West Bengal state health ministry and the Kolkata Police who have failed in providing the slightest of protection to on-duty doctors.” Demanding the immediate arrest of the perpetrators, it also requested doctors to suspend routine activities and join the protest. Numerous other associations have issued similar statements. 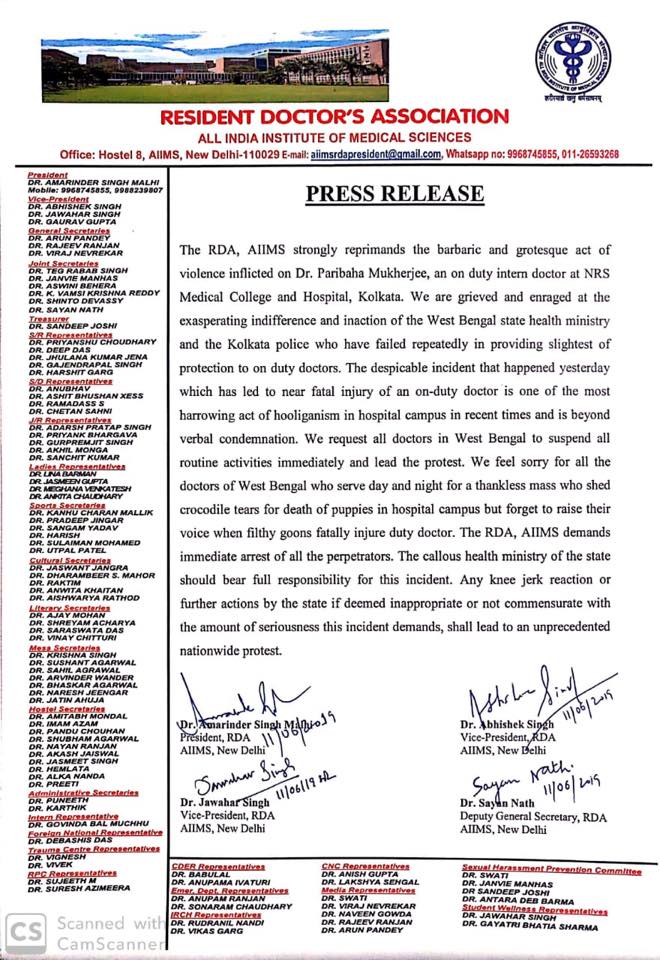 Another attack was reported at the Burdwan Medical College late night on Tuesday. One junior doctor, Aniruddha Hazra, is said to have been injured as a result. According to posts on social media by members of the fraternity, the Police once again was said to be mute spectators as the mob resorted to stone pelting.

There is growing angst against the state government for its utter failure to maintain law and order. Calls are being made for the Health Minister to step down from her position, Mamata Banerjee is receiving great criticism as well.

One junior doctor at a hospital in Kolkata told OpIndia.com, “The state government is responsible for the series of events that have transpired. Firstly, they failed to provide adequate safety and security to doctors. And secondly, they have been unofficially patronizing these antisocial elements who can call up two trucks full of their people to attack those who are doing their duty.”

It appears to be a general sentiment as evidenced by the flurry of posts on social media on the matter. A lot of people are convinced that the Kolkata Police failed to take appropriate measures due to political considerations. Another post that has gone viral on social media is that of an alleged instigator of the violence against the doctors. From his posts, it appears that he is a Pakistan lover. That has prompted many apolitical people to assume that there were political considerations involved when the Police allegedly did not act against the mob.

A resident doctor from Kolkata present at the protest at NRS told us, “Medical colleges from across Kolkata have joined the protest. Everyone, the students and senior doctors, is convinced that mob violence cannot go unpunished any longer. There have to be consequences for assaulting doctors.”

Meanwhile, the events could have grave political implications for Mamata Banerjee as well. On Tuesday, the day after the vicious attack, the Chief Minister of West Bengal was busy inaugurating Vidyasagar’s bust at College Street. It has been interpreted by the fraternity as sheer apathy towards their plight. We were told, “She was busy with Vidyasagar’s statue while we were protesting. It’s infuriating, really. There is complete indifference to the situation and we are being given only halfhearted assurances.”

There has been a spate of attack on doctors by family members of deceased patients in recent times. Therefore, there is genuine anguish among the fraternity across the country. A junior doctor from the North East told us, “These kind of incidents are happening far too frequently now. People in the community should understand that doctors cannot save everyone and they have no right to beat them up in case the patient dies.”

In light of the disruption of services, patients are suffering as a consequence of the abject abdication of responsibility by the state government. Relatives of patients are not able to meet their wards and are uninformed about their well-being. They are also tensed that their wards are not being taken care of at the institutions. If the state government does not step in and help alleviate the escalating situation by assuaging the concerns of the doctors, things could very well deteriorate even further.