Rahul Gandhi finally arrives in Parliament, but stays true to form and goofs up while taking oath as MP 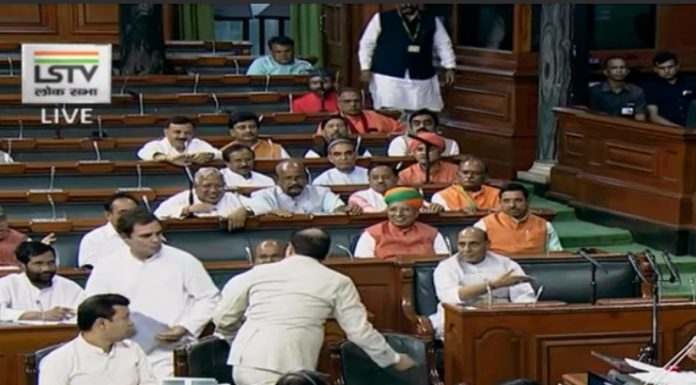 Ending speculations, Congress president Rahul Gandhi finally arrived at Lok Sabha today after 3 PM, just in time for his turn to take oath as the MP from Wayanad constituency in Kerala.

But the oath taking by the four-time Lok Sabha MP didn’t go smooth. As can be seen on video capturing the moments, after taking oath, Rahul Gandhi forgot to sign on the register. Immediately after reading his oath statement in English, Rahul Gandhi started to walk away from the spot towards his right. While all the other MPs sat down at the table in the middle of the house after reading the statement, signed on the register kept there, and then walked towards their left to the speaker’s chair where they greeted the pro-term speaker. After that, they went behind the speaker’s chair to enter the hall from the other side, in front of the opposition benches.

But Rahul Gandhi was not in the Parliament for the whole day, and perhaps that’s why he didn’t know the protocol. When he started to walk away, a Lok Sabha official had to intervene, who stopped him and told him that he has to sign the register. Defence minister Rajnath Singh, who was sitting next to the PM’s seat on the front row of the treasury benches, was also seeing indicating Rahul Gandhi to return and sign the register. After Rahul Gandhi comes back does the same, the official again instructs Rahul Gandhi that he has to go towards the speaker, and this time the Congress president follows the instructions correctly.

Congress President @RahulGandhi takes oath for a fourth consecutive term as a member of the Lok Sabha. pic.twitter.com/LPjuQWZ5Z4

Interestingly, the official Twitter handle of Congress posted the video of Rahul Gandhi taking oath in Lok Sabha, but they posted an edited video. The Congress party removed the part where the Congress president was leaving after taking the oath and the Lok Sabha official stopped him.