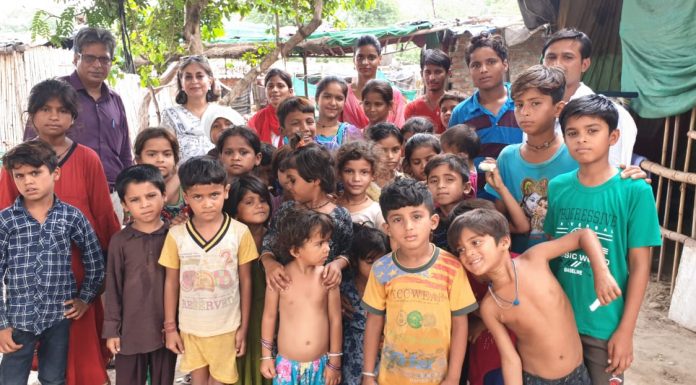 ‘What is it you like here?, I ask seventeen-year-old Shashi, who vigorously pounds the clothes under tube-well water while her neighbour’s toddler enjoys getting wet.

With her beautiful face beaming with joy she pauses, spreading her arms across an expanse of rickety shanties, a landfill of garbage, a swamp of fetid water she responds, ‘Bas, sab kuch! Sab kuch’!

Having arrived from Pakistan just three days ago, her parents and two young brothers are living from shanty to shanty, thanks to the generosity of those who have as little like them, till they get a roof, a small table fan, one light point and one socket of their own.

For someone who had lived her young life bound within four walls, never stepping out in fear of being picked up, used and thrown by the landowner who employed her parents or by other men outside the Hindu hamlet, Shashi is breathing as free as never before in her previously oppressed life.

Minki with the blue eyes was one of the first refugees brought to the Majnu ka Tilla camp. She etched out her boundary with branches and twigs, put up a  rickety home, painted the walls & made it her own, exhaling for the first time in 50 years & now awaits to be embraced by the Indian State. “I hope by next year”.

In her neat little patch, she has her temple under a tree and a faded Tiranga fluttering atop.

“See!”, she points to a collection of idols, big and small.

Her toothless smile, priceless. ‘No one kicks it & breaks it here’. I will confess, at that moment the recently desecrated Durga Ma Temple at Hauz Qazi immediately came to mind. But I did not have the heart to tell her it could happen here too. Yes, right here in India’s capital, the seat of our government, the haven she had escaped to from what she called living hell.

Her son sells phone covers at the traffic lights.

‘Teach him a skill please. The boy refused to go to school after a few years. He had to sit separately because he is Hindu and was being forced to learn the Kalma so, we made him work with us in the fields…’

Whereas next door Chander and Rampyaari are ready in starched uniforms for the afternoon shift at school. They came at an age when it was not too late for them.

There is an inexplicable le emotion that overwhelms you seeing human resilience and the spark of dedication, hope, aspiration among abject poverty and squalor.

Ram Pyaari tells me with the matter of fact confidence that she wants to be a teacher because teachers can guide young people & also policewomen because they have authority.

So many young girls, gorgeous with shining, happy faces, show off their embroidered bedcovers and pillowcases. A dark, hot, windowless room with several donated sewing machines is humming with quiet diligence as they stitch commissioned kurtas and salwars.

Outside a mother shows me her four-year-old boy.

‘I left him with my brother in law when he was a few months old & took my other three and crossed the border’.

Hugging a resisting child she says “he now belongs to them but at least I get to see him as they recently came across too”.

Another woman tells me of the two she left behind.

Does the wound ever heal? Does that hole ever fill up?

Most of us thankfully and hopefully will never ever experience it or know the pain of leaving a child behind to seek a future for the others.

Coming from stock, that fled home, hearth, jobs, malta orchards by train & part on foot, in the summer of 1947, to bursting refugee camps at Kingsway, Outram Lines, Reed Lines, not far from Majnu Ka Tilla, the connect is strong.

From those camp, tents rose educationists and clerks, officers and soldiers, farmers & judges who made a new life through sheer dint of hard work.

Seventy-two years later these Pakistani Hindu refugees find their way to their natural home India, with the same anxieties, the same fears and hope for a safe and secure future for themselves as those before them.

Who knows how the Phoenix will rise from these ashes…

There are, no doubt many such shanties across our metropolises- each one with different stories and different tribulations.

All, without exception, badly equipped to handle any human existence and yet they exist right outside our islands of privilege which we pass by every day of our lives, without a thought.

I’m ashamed to say that I have never ventured into one and only imagined the worst.

But thanks to Sudhanshu Singh of Human Aid International (HAI), who is is doing such commendable work with a small dedicated team.

Chanda and Anishka who are profiling every family, its members, their medical background, educational abilities, skills, aspirations.

Neetu, who runs the stitching classes.

What could have been a hopeless mass of destitution was actually a story of real people with dreams for their offsprings and a hope for the future.

So please if you have time to spare and a vocation to teach, there are eager children just waiting to learn & have a world open up to them. Older ones need tuitions in Maths, Science, English.

If you know of mechanics, plumbers, electricians, carpenters who need apprentices there are able young men looking for an opportunity.

If you know of doctors who could devote some time for a monthly checkup and an experience no expensive hospital offers, this is the place.

Besides, the more serious ailments there is the problem of untreated water causing skin ailments and kidney stones. Mosquitos bites & scabs cover arms and legs.

If you can get the MCD to regularly fumigate or if counselling is what you do well, or portacabins and toilets, solar panels, tree saplings, mosquito nets..do help.

Till these people step out to eke a life armed with Indian citizenship and other survivors trickle in, risking it all.