In a video shared by ANI, Joshi was seen snatching two torn parts of the Indian national flag from two Khalistani supporters. 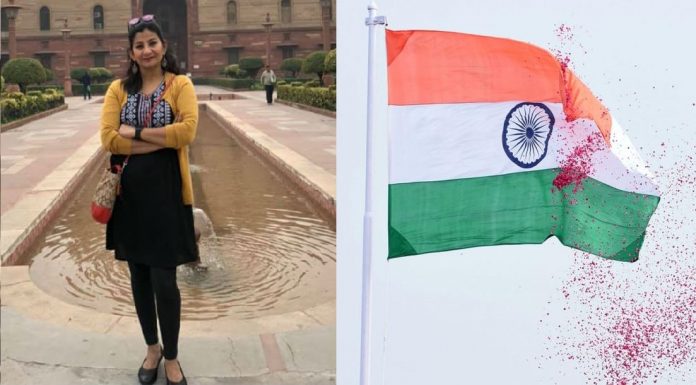 In a despicable act, pro-Pakistan and Khalistani supporters vandalised the Indian tricolour during a recent protest outside the Indian High Commission in London on the Independence Day.

Indian Journalist, Poonam Joshi while reporting for ANI in London bravely confronted the Pakistani diaspora while upholding the honour of the tricolour which was being defiled by pro-Khalistan sympathisers.

Joshi was covering the anti-India protests by Pakistani diaspora and Khalistani supporters outside the Indian High Commission in London in response to the Government of India’s decision to scrap Article 370 and bifurcate the erstwhile state of Jammu and Kashmir (J&K).

At one point, a young Khalistani supporter sneaked into where the Indians stood, grabbed an Indian flag, threw it over to the Pakistan side and returned to his cohorts. He then mutilated the tricolour and challenged the Indians to retrieve it.

While the police officers turned a deaf ear to the Indians who brought the desecration of the flag to their attention, Joshi crossed to the Pakistani side, snatched the flag from the hands of the man and brought it back.

In a video shared by ANI, Joshi was seen snatching two torn parts of the Indian national flag from two Khalistani supporters.

“Hundreds of Pakistanis snatched our flag & it took 1 Indian woman 2 bring it back,” she tweeted. “I couldn’t withstand what was happening and [it] really hurt my pride,” said Poonam. “Was there for ANI but ‘Desh ki duty pehli duty’, said the journalist. The dauntlessness shown by the journalist was lauded on social media.

The demonstrators were encouraged by the Pakistani government to amass and protest outside the Indian High Commission on 15 August which marked the day of India’s Independence.

The abrogation of Article 370 in the erstwhile state of Jammu & Kashmir last week has rattled Pakistan to the core. Pakistan had celebrated India’s independence day as a ‘Black Day’ in an attempt to internationalise the recent developments in the Indian territory of Jammu and Kashmir.

It had also taken to Twitter to taunt India on it’s Independence Day. Nevertheless, the silly shenanigans adapted by the parody nation backfired and Pakistan’s armed forces spokesperson Asif Ghafoor who had attempted to mock India on behalf of his country managed to reduce himself to a troll.