OpIndia
Home Editor's picks If we talk about Kashmir Hindus exodus, we are labeled Islamophobe: DU student who was shouted down by left-wing goons
SpecialsInterviewsNews Reports

If we talk about Kashmir Hindus exodus, we are labeled Islamophobe: DU student who was shouted down by left-wing goons 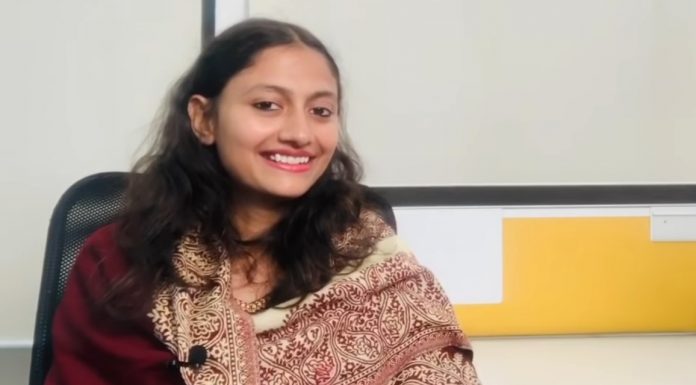 On 19th January, a Delhi University student named Deepika Sharma was heckled and shouted down by leftist goons as she tried to speak up on the atrocities on the 30th anniversary of the exodus of Kashmiri Hindus from the valley. Deepika, a final year student of Hindu College, was speaking at a remembrance meet held in Hindu College under the Delhi University, when a mob of leftist students started shouting her down. Deepika had broken down facing this bullying from left-wing student activists.

OpIndia Hindi editor Ajeet Bharti talked with Deepika after the incident. She said that after joining the university she heard that students should talk about issues of the common man, as it an intellectual place. Because the voices raised at the university reach the government, gets printed. History is made here, and I have seen history can be changed here also.

When asked why she chose to talk about Kashmiri Pandits, Deepika said that the history of the exodus of Pandits is 30 years, and most people remember about 19th January in 1990 when it had reached its peaked. But people don’t know about the incidents and situations leading to it which were going on for years, neither they are taught in universities. When it comes to Kashmir Pandits or Kashmiri Hindus at large, there is silence. People don’t talk about in universities, Kashmiri Hindus are not made part of political discourse. Professors, progressive students, liberal students, intellectual students don’t talk about them.

Deepika said that people talk about the exodus, but don’t talk about the ‘why’ behind the exodus. The exodus was not communal, but the reason behind was communal. We have space to speak, but that space is limited to what is allowed by the crowd. We can’t speak what they don’t allow. If you start talking about the reasons for the exodus, start talking about stories of people who have reached Hindu college from refugee camps, then they will start labelling you. That will be communal, you will get the label of Islamophobic, you will be isolated, you will be called Hindu supremacist. They will say you should talk about free Kashmir at this, not Kashmir Hindus. You should forget about the Kashmiri Pandit issue, you should not go back in history, they will say.

Talking about the remembrance meet held at the Hindu College and reactions to other students to it, Deepika said that when started talking about organising the meet, a lot of students said that this is madness, and a large number of students will attack her like vultures if it is organised. Her well-wishers advised her against organising the remembrance meet. But she still decided to go ahead with it, and distributed posters and messages about the meet. When the posters were out, students started asking to postpone the meet, as an anti-CAA-NRC protest was already organised and posters were printed a week ago. Deepika said that it was a pre-emptive action by the leftist groups to plan protests on 20th January so that the no event can be organised to remember the exodus of Kashmiri Hindus. The exodus had happened on 19th January, the event was planned on 20th as 19th was Sunday, and no way it could be held on any other day, she said.

Deepika said that 19th January is a black day of Indian history, and there can’t be any other angle to this date. Until and unless this date becomes a part of history in university and colleges, we will keep fighting, she said.

Talking about the letter that she had started to read at the event before she was shouted by leftist goons, Deepika said that it was a letter from a former student of the college belonging to a Kashmir Hindu family who sent an open letter to be read at the event as she was out of town. Akruti Raina had written the story of her family, what they had to suffer due to the forced exodus.

When Deepika was reading the letter, few students and teachers present there had tears on their eyes hearing the traumatic story. But the left-wing students started raising slogans, calling it Islamophobia, and forced her to stop her reading it.

Deepika Sharma said that only about 5-6 students were with her, and few students had come after seeing the posters of the event. But still she went ahead with it.

Read- JNU: Here is how common students are being harassed by Leftists for not joining their ‘protest’ and wanting to register for next semester

Talking about the growing influence of left-wing politics among students, the student said that it has become a fashion among students to call themselves leftists. You can’t even think about calling yourself right-wing, but you can’t call yourself non-leftist also. If you are not a leftist, you will not get a chance to speak anywhere, she said.

Deepika Sharma said that she is labelled as Brahminical supremacist, Hindu supremacist, identifying her as a Brahmin. I am being labelled based on my surname, which is casteist which these same leftists claim to oppose. Left has perfected the art of controlling the mind, she said.

She also said that when left-wing students organise some political movements in the campus, the professors come and say that ‘this is your first duty as students’, while studying should be the main duty of the students. If politics and study both were going on together than it was fine, but now only politics is happening, she said.