Scientists and physicists will help us understand the development of science in India from ancient times to the modern period on the disciplines of Mathematics and Astronomy. They will also inform of how the temple economy worked and helped sustain thousands of families, acting as the lifeblood of the Indic civilisation. 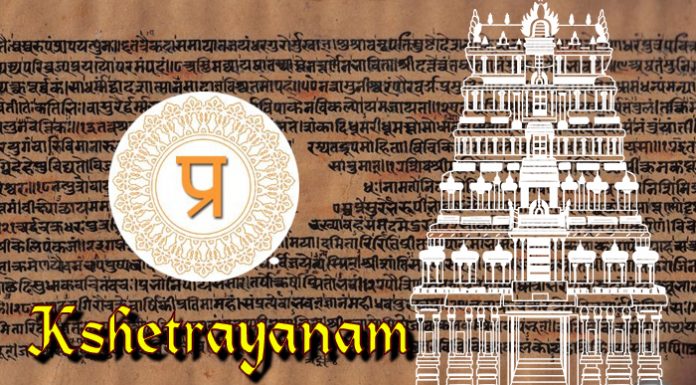 Pragyata along with its partners is organising “Kshetrayanam” – an annual 1-day conclave that discusses the challenges facing our sacred spaces and their associated cultural practices. The conclave will be held this year in Chennai on January 19th (Sunday).  Pragyata is an online journal, event organiser, platform for video-based course content & research centre on Indic studies.

It seeks to ensure that Indic institutions can once again function autonomously and be the lifeline of our civilization. The program have a great line-up of 12 Dharmic stalwarts who will enlighten as well as encourage people to be more conscious of various issues that need to be taken up urgently to usher in an Indic renaissance.

As there have been some queries by individuals who cannot be a part of Kshetranyanam 2020 but would like to support our cause, you may do so by contributing at https://t.co/1lH7N9ySN1.#Kshetrayanam pic.twitter.com/GOCd84DRn7

Thousands of temples, especially in the South of India are under the control of the government. For instance, over 38,000 temples in Tamil Nadu have been taken over by the state government as per the Tamil Nadu Hindu Endowments Board. Reasons offered for it range from poor management, corruption, nepotism – making temples like just another enterprise with the devotees hard money landing straight into the coffers of the government. Families, which for over millennia have taken care of temples and dedicated their lives to them are at once relieved of any responsibility and made to feel unwanted. The case is repeated with erstwhile rulers of the princely States who after been sidelined by the government detaching the bond with their deities. With the temples comes the massive seizure of temple owned properties as well. Being in control of their own land, such areas could otherwise be used by Hindus for the benefit of its society by making patshalas (schools), assembly halls etc, but that is not possible now. To help us understand the gravity of this situation, lets see an example.

Read- The Sabarimala verdict is anything but a gender equality win

Recently, centuries-old Mathas around the Jagannath Temple in Puri were demolished by the state government to make way for various infrastructure projects. This loss of heritage is immeasurable as the government plans to compensate devotees with a Jagannath Temple corridor. Pilgrimage spots are been turned into tourist spots, making many ecologically sensitive areas prone to massive damage (Uttarakhand comes to mind). Sabarimala temple and its associated worship of lord Ayyappa, who as a celibate and wishes for the entry of men and only women outside of the reproductive age, has found a voice with the gender equality crowd who don’t seem to have understood the rights of the deity in wanting who enters his abode. Hindu Festivals have also come under the scanner of the activists and judiciary with them being muffled as one can see with Deepavali with cracker ban. We seem to care for the environment only during this time, unaware of how such actions devitalize traditions till they exist no more. Even on the economic front with thousands being out of jobs as the government comes up with whimsical solutions.

The conclave will also have speakers who will enlighten us on festivals such as Durga Puja, with their families, for the past 400 years, having been celebrating the puja in a traditional manner. Not spoken about nearly enough is the land of Tulunadu on the Karnataka coast with its rich religious tradition of Yakshagana – a night-long dance and drama performance practised with great fanfare, the Karadi Vesha (Bear Dance) among many others.

Scientists and physicists will help us understand the development of science in India from ancient times to the modern period on the disciplines of Mathematics and Astronomy. They will also inform of how the temple economy worked and helped sustain thousands of families, acting as the lifeblood of the Indic civilisation.

Interested persons can be a part Kshetrayanam 2020 by registering at kshetrayanam.com, for the Indian heritage to be reclaimed and make way for a bright future. People who want to participate in the event will have to be present at the Rasika Ranjani Sabha at Mylapore in Chennai on 19th January (Sunday). The organisers are offering discount for students and they can register at this address.

Those who cannot make it to the conclave in Chennai, they can watch it on Live Stream by registering here.