When Nepal was groaning in earthquake, Christian Missionaries were shamelessly selling Jesus 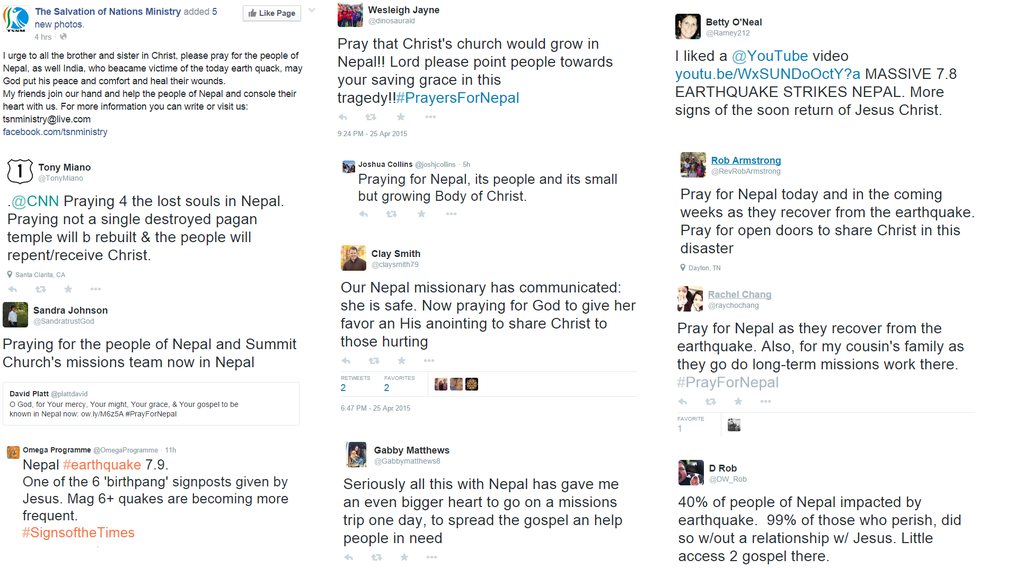 Pictures and news from Nepal after the massive earthquake shocked people across the globe, but amidst all these chaos, tragedies and cry,  Christian Missionaries were busy selling Jesus and Christianity. It was more shocking because many of these individuals and organizations are influential and they reach many people via social media and other channels. One of the most disturbing messages common in many tweets was stress on Christ and Christianity by pointing out the helplessness of other religions like Hinduism and Islam.

1400 souls dead in Nepal and climbing, I wonder how many of those heard the Gospel? #PrayersForNepal#PrayForGospelMovement

Devastating Nepal earthquake could have been prayed down by acknowledging that Christ is the ruler of God’s creation Matt 18:19-20, Rev 3:14 — Charles Boucher Jr. (@GrooverMac) April 25, 2015

Praying for the country of Nepal…may this tragedy be an open door for many to receive the gospel! #Christalone — Chris Chadwick (@ChrisChadwickSD) April 25, 2015

Pray and give in Jesus’ name for the #KathmanduEarthquake #Nepal victims via these great orgs. @SamaritansPurse @WorldVision @compassion — Kevin Kalstad ✞ (@Kevin_Kalstad) April 25, 2015

Pray for believers in Nepal & India that this tragedy may provide an opportunity to show many the love of Jesus. Turning tragedy to triumph. — Michael Catt (@MichaelCatt) April 25, 2015

Sad to know about Nepal.May the Lord comfort those who lost their loved ones due to Earth Quake.Jesus is Coming Soon ! — Moses Oniel David (@MosesOnielDavid) April 25, 2015

Prayers for Nepal. Earthquakes and death are proof that we live in a fallen world that awaits its restoration by Jesus when he returns. — Gospel Applied (@GospelApplied) April 25, 2015

Praying for the people of Nepal. Christians, we must respond by meeting humans needs and sharing the hope of Jesus. http://t.co/qcOpCgMOdi — Michael Priest (@mpriest63) April 25, 2015 These scavengers pose a far more serious threat than what we can anticipate. These tweets can’t be ignored with the assumption that these may spread hatred. If neglected, these people will not only demean the efforts of organizations and governments working for people, but they will opportunistically romanticize sufferings of people for their malicious gain.