A Kashmiri Pandit writes what he feels about ‘Kashmiriyat’ 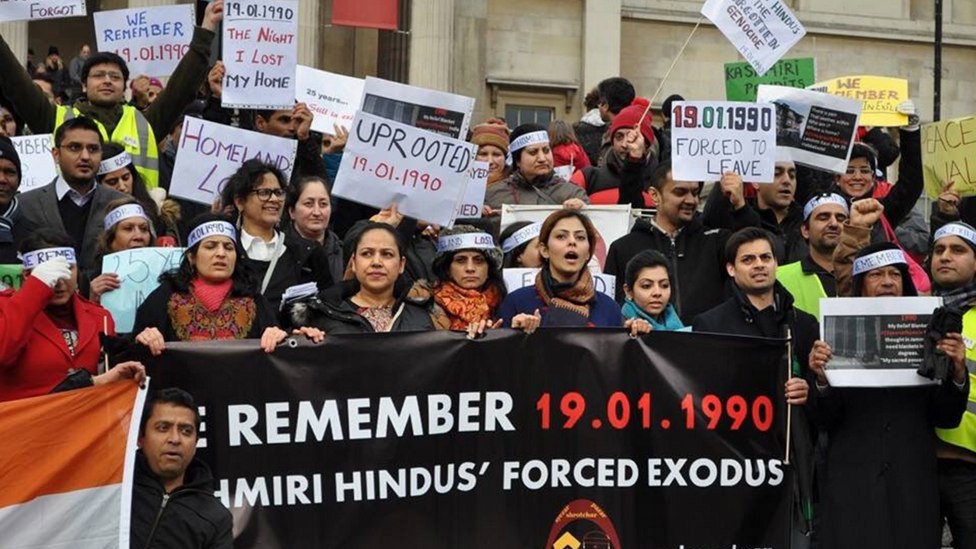 Another year in exile has passed. Another “19th January” is here.

On 19th January 2017, as we Kashmiri Pandits observe “KP Holocaust Day” yet again, we will begin our 28th year in exile. In just half of those years in exile, sons of King Dasharatha became immortal. Sons of Rishi Kashyap though, continue to tread towards oblivion.

I was in 10th standard when the Jihadi tsunami triggered ‘ethnic cleansing’ in Kashmir, resulting in forced exodus of Kashmiri Pandits from the valley. Most of us had never stepped outside the valley before we were forced out.

Kashmir had been the only cocoon we had known. That year, when we were forced to cross the Banihal tunnel – little knowing that the return journey will remain an illusion for decades – we not just lost our roots, but a little bit of our identity too.

After a few years in Jammu, I landed in an engineering college in sleepy town of Pilani. That was the southern most I had traveled till that day. From Kashmir to Jammu to now Rajasthan, a lot had changed rapidly. Identity fog had thickened.

Then one day, a senior asked out of the blue, “So, what do you think of Kashmiriyat?”

I was stumped. I knew lot of things from Kashmir were popular across the country. Kashmiri Hangul. Dum-aloo, Wazwan, Pulao, shawls, carpets, other handicrafts, and many such things. But, what was this “Kashmiriyat”? I had never heard of it!

But, here was a nerdy senior who was apparently reading beyond front & sports pages of the newspapers. Little did I know, as Kashmiri Pandits had joined the endangered Hangul in a race towards extinction, newspaper editorials had begun projecting this magic of “Kashmiriyat” as panacea.

In these 28 years though, the hoax of Kashmiriyat has been spun and continued to spread far and wide. Yet failed to deliver.

Kashmiriyat was brokered bliss, if any, paid for by the silence and subjugation of a microscopic minority, swallowing bitter cups of insults repeatedly over decades. If at all anything like Kashmiriyat existed, it was just the silent agony of submission of the Kashmiri Hindus over centuries in an attempt to survive in the valley.

As a minuscule minority in Kashmir, Hindus were largely a diffident lot – cautious not to get their majority ‘brethren’ on the wrong side. And, be silent when an insult was hurled at him for his religion or being an Indian at heart. Yes, there were good days, personal friendships, individual bonds. But, the moment those individuals merged into a crowd – the bonhomie vapourised.

It must have been Kashmiriyat, when Pandits’ homes in downtown Srinagar would get pelted with stones each time India and Pakistan met in a sporting arena. Be it a celebration of a Pakistani victory or anger over India winning, stones flew at our homes. I vividly remember when Indian hockey team lost miserably to Hassan Sardar’s onslaught in 1982 Asian games, our home in downtown received a shower.

Stones were pelted on KP homes to mourn Bhutto, when Zia executed him. And again to mourn Zia when he died. KP’s bore the brunt even during factional wars between Shers (Sheikh Abdullah supporters) and Bakras (Mirwaiz supporters).

Kashmiri Pandits were not just all-weather whipping boys to uphold Kashmiriyat, we apparently were quite international too. Since UN office was somewhat away from downtown, often Friday afternoon protests against some act or statement by US/Israel around Palestine or Iran would result in a token round of pelting on Hindu homes in the downtown. If not stones, abuses or taunts of “Dal’e Batta” (pulse eating weaklings who can’t match the might of the non-vegetarians) were commonplace. No one objected, lest Kashmiriyat would get tainted.

For decades KPs have lived with an annual insult, as the state observes July 13th as “Martyrs Day”. On July 13th 1931, Muslims mobs, supposedly out agitating for self-rule, went into a frenzy of communal violence and looting against minority Hindus. What should have been a “Black Day” is officially observed as Martyr’s day in Jammu & Kashmir. Calling arsonists, looters and criminals who rained hell on hapless Hindu minority that day as martyrs is another sample of classic “Kashmiriyat”.

In Feb 1986, some events of Jammu were used as an excuse to loot and ransack Hindus in valley. Hundreds of old and sacred shrines across Anantnag, Pulwana, Kupwara, Baramulla and Srinagar were destroyed, desecrated and razed to ground in another rousing tribute to Kashmiriyat.

Kashmiriyat formula was always simple. Kill a KP and become a hero; be it those killer mobs of 1931, or Bitta Karate  and Yasin Maliks of recent times.

It must have been Kashmiriyat in literature, when on 4th January, 1990, a leading local Urdu newspaper Aftab published a press release from Hizb-ul-Mujahideen ordering all Kashmiri Pandits to leave the valley. Few days later, another Urdu newspaper Al-Safa issued this two day ultimatum on their front page.

The state has since then been slowly and steadily obliterating all signs of our existence. In last decade or so, Hari Parbhat has become Koh-i-Maran, Shankaracharya hill is now Takht-e-Sulaiman and Anantnag is Islamabad. Talibanization of centuries old Hindu names of iconic places in the valley must be an intellectual tribute to “Kashmiriyat” as well.

Blatant refusal of the state and majority community in 2008 to even allow a mere 99 acres for Amarnath Yatra amenities was another tribute to Kashmiriyat. Followed up by curbs on Kausarnag yatra in 2014.

And now, they do not even try to feign Kashmiriyat anymore. The very people who beat their chests over sanctity of Article 370 and cried wolf over so-called attempts to “change demographics of Kashmir” are conniving today for settlement of illegal Burmese Rohingya and Bangladeshi muslim immigrants in J&K, and yet continue to outrage over even a mere suggestion of Kashmiri Pandit resettlement colonies in Kashmir.

Today, those who have lived through the nightmares of 1989-90, still recall those blood curdling chants of “Kasheer bann’e Pakistan! Batav ross’, Batnev saan” (Kashmir will be Pakistan, along with Hindu women, but without Hindu men), or still remember Nadimarg, Wandhama, Sangrampora – can only manage a wry smile when they hear “Kashmiriyat” romanticised in public discourse.

Yet, the hoax continues to live and thrive in lit-fests, TV debates and liberal Op-Eds.

Meanwhile, I wonder if my nerdy senior is still tracking how Kashmiriyat continues to thrive and swell.

A Soul in Exile. A Kashmiri Pandit Refugee in India.
Tech wage slave in Bangalore. News freak in general.