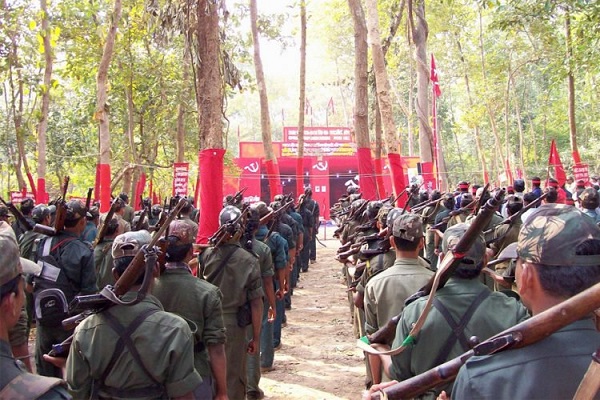 The coherent approach executed by the present government in tackling left-wing terror seems to be yielding results, as there is a large number of desertions in the ranks of Naxal forces, who are now surrendering for a better livelihood.

According to the reports, two Naxal leaders carrying higher rewards on them have surrendered before the senior police officials in Jharkhand and Chattisgarh. The surrendered leaders are known to be Kamlesh Ganju alias Birsai ji,  who was the leader of Bihar-Chhattisgarh-Jharkhand Special Area Committee of CPI(Maoist). He surrendered before the Commissioner of Palamau division, Manoj Kumar Jha and DIG (Palamau division) Vipul Shukla. Another Maoist leader Vetti Rama, who was carrying a reward of Rs. 8 lakh turned himself in before senior officials at the Sukma police headquarters.

Reportedly, Kamlesh Ganju is wanted in more than a hundred cases registered by the police of Chhattisgarh, Bihar and Jharkhand. He was also carrying a reward of Rs. 25 lakh on his head, police said. Ganju, who joined the group in 1993 at the age of nine, was later part of terror outfits including the erstwhile MCC and Peoples War Group. Indrajeet Mahatha, SP of Palamau said that Kamlesh Ganju is part of the Naxal network for the past 23 years and was the leader of Maoists group in Budapahar. Kamlesh Ganju was the mastermind behind the killing of 17 security personnel in 2013 in Jharkhand’s Latehar district.

Interestingly, Kamlesh Ganju claims that the reason behind his surrender is that Naxals have lost their loyalty towards Maoism. He also added that another reason for his surrender is his family responsibilities and prevailing ills in his community.

Vetti Rama, another top leader, is responsible for the Sukma blasts in March this year in which Naxals had blown up a mine protected vehicle, killing nine security personnel. Reportedly, Rama had joined the left-wing terror group in 1995 and was responsible for several major Naxal attacks. The disgruntled Naxal said that increasing pressure of security forces combined with state’s surrender policy has been the major reason for a large number of surrenders.

The DIG Sundarraj P told that during his interrogation, he has revealed crucial details about the Maoist urban network and sympathisers. “Rama revealed that sustained operations by security forces in Chintagufa, Kistaram and Bhejji- considered as core areas of Maoists in Sukma, coupled with development works, resulted in the Naxals’ hold weakening in the area”, the DIG said.

The Naxal cadres in the tribal areas are becoming increasingly dissatisfied with the ideology and are willing to join mainstream for a better life. Recently, Pahad Singh, one of the important leaders of the Naxal terror network, has also surrendered to the Chattisgarh police. He was carrying a bounty of Rs. 1 crore and is believed to have been involved in over 80 cases against him out of which 40 cases have been filed in Gadchiroli alone.

Recently, Pahad Singh in an interview to OpIndia has revealed a lot of sensational aspects of the Naxal terror network operating in both tribal and urban areas. Singh in the interview has revealed the ‘modus operandi’ of the Naxals and the connection of ground forces with its urban network. Interestingly, Pahad Singh went on to identify Arun Ferreira, one of the arrested Urban Naxals and claimed that he had met him in a meeting of the banned CPI-Maoist.

Pahad Singh has described how the so-called ‘intellectuals’ deceive and exploit the simple Adivasis and use them to further their agenda. Pahad Singh, who refers ‘Urban Naxals’ as ‘Nithalla buddhijeevi’ (jobless intellectuals), blames the urban network for the sufferings of the Adivasis, as he says Urban Naxals want to keep the Adivasis deprived of development so they can use them to further their own selfish motives.