Sabarimala: Will not allow activists to use the temple as a place to prove their point, Kerala Devaswom Minister 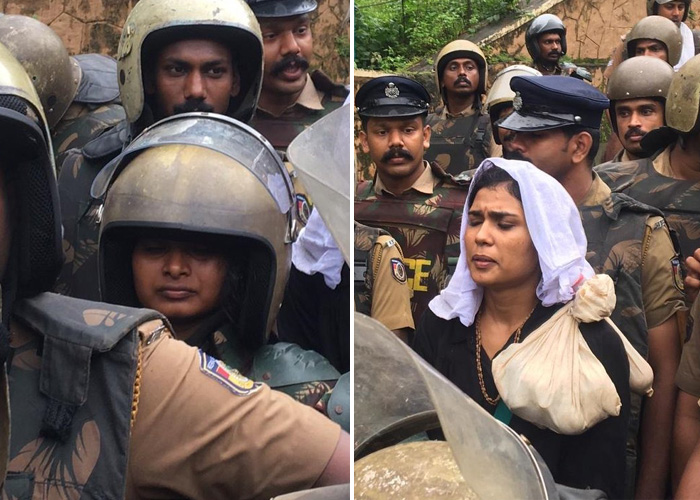 Tension grew at Sabarimala as head priest at Sabarimala threatened to shut the temple door and handed over the keys as two women, Kavitha Jakkala, a journalist with Hyderabad based Mojo TV and activist Rehana Fatima, tried to enter the shrine.

The erstwhile royal family of Pandalam, who are the custodians of the Sabarimala temple, asked the head priest to close the doors of the shrine as two women headed for the temple under police protection. Protesters also squatted on the path leading to the hilltop temple.

Kadakampally Surendran, State Devaswom (religious trusts) minister said that while people of all ages should be allowed to go there, it should not be made into a place where activists come and showcase their power.

People of all ages will be allowed to go there. But at the same time we won’t allow it to be a place where activists can come&showcase their power. It can’t be a place where they prove certain points of theirs: State Devaswom (religious trusts) Minister #SabarimalaTemple #Kerala pic.twitter.com/5a4MvZYN0f

He added that Sabarimala temple should not be a place where these activists come to prove their point.

The two women, Kavitha Jakkala and Rehana Fatima had come to the temple and were escorted by the police but the priests refused to open the doors for them. Terming closing the doors as a ritualistic disaster, Kerala IG S Sreejith said that while they could escort the women and give them protection, the ‘darshan’ is something that can be done only with the consent of the priest.

It’s a ritualistic disaster. We took them up to temple & gave them protection but ‘darshan’ is something which can be done with consent of priest. We will give them (journalist Kavitha Jakkal&woman activist Rehana Fatima) whatever protection they want: Kerala IG S Sreejith (2/2) pic.twitter.com/YleAGTQbcj

Ramesh Chennithala, Kerala Congress leader said that he met the Governor and explained the situation. He said that not only Hindus but people from all religions are allowed entry there. He said that activist Rehana Fatima was given a police uniform, which was wrong.

Following this, the journalist and activist have returned. Another woman, Mary Sweety also returned midway after she was stopped by the protestors. She has been taken to the police control room.