The Naxals murdered Achyuta Nanda Sahu, but the Editors Guild killed him

For the Editors Guild, Achyuta Nanda Sahu didn't serve their agenda. The communist mouthpiece and journalists covering Rohingya's in Myanmar did. Democracy, freedom, liberty and rights don't perish for lowly cameramen, they perish only for communist mouthpieces.

“Do you know a man is not dead till his name is spoken?”

As journalists and content generators, we write about, talk about and report terrible tragedies every day. Every day, there is at least that one piece of news that makes us question humanity. One such incident today was when a team of Doordarshan news channel had gone to Dantewada to record a documentary film in the Naxal-affected area where elections are due to be held for the first time when the Maoists ambushed and attacked them. The slain Doordarshan cameraman was identified as Achyuta Nanda Sahu.

After the news of Sahu’s murder surfaced, the Editors Guild released a “heartfelt” message. 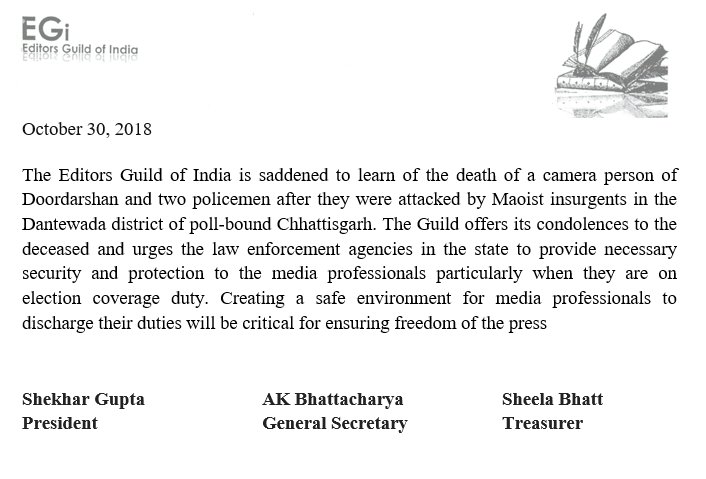 When they tweeted this statement, the text of the tweet read:

“Editors Guild of India has issued a statement on the Dantewada Naxal attack that killed a Doordarshan camera person. You may also read the full statement here”.

Not once in the statement or the accompanying tweet was the name of the camera person mentioned. 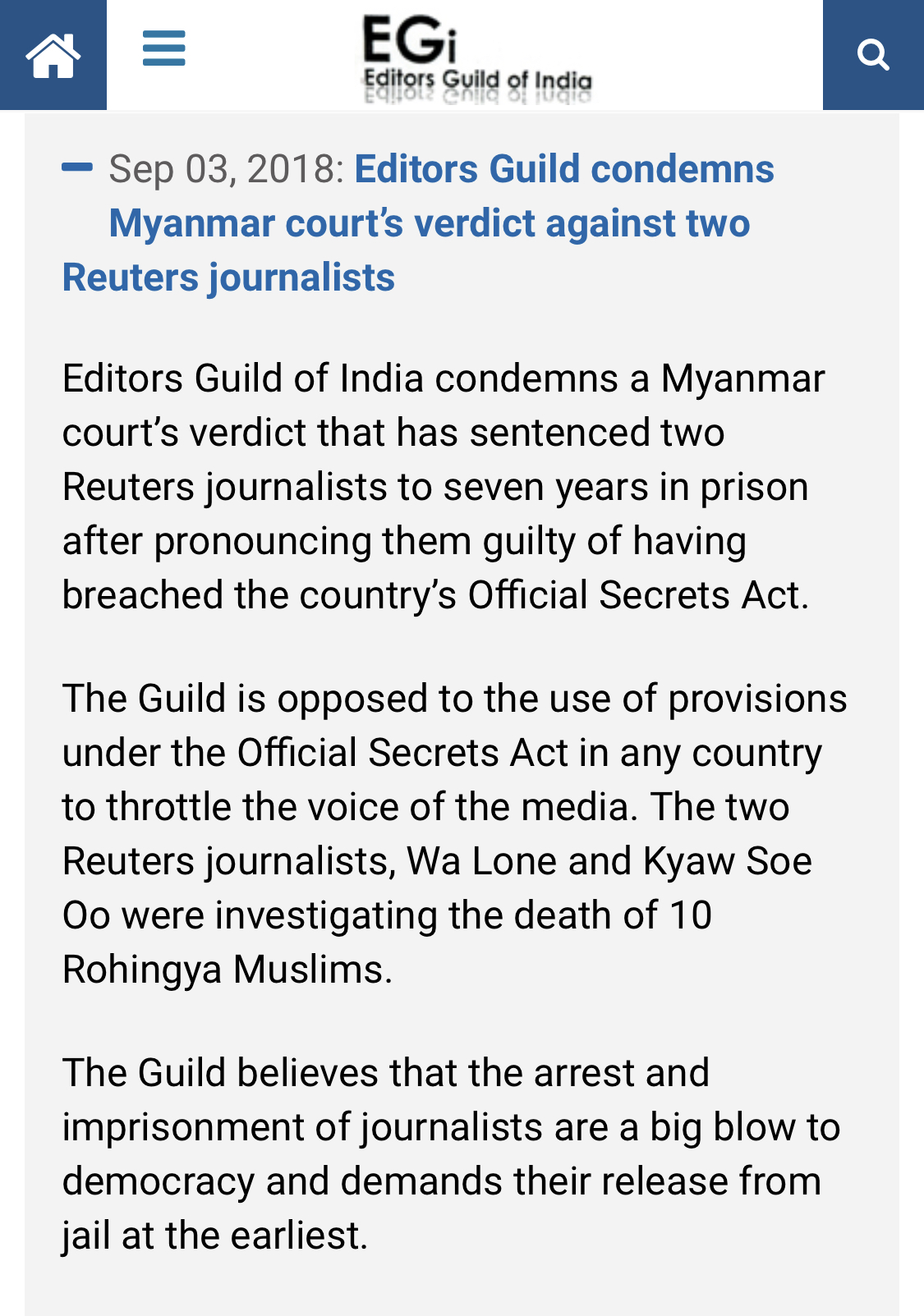 The Editors Guild released a long-winded statement when a communist mouthpiece was penalised for not adhering to the law of the land. The Registrar of Newspapers cancelled the registration of Desher Katha, which is a mouthpiece of the Communist Party of India – Marxist for ‘unauthorised changed in ownership’. Their statement, in this case, is substantially longer than the one released today.. where they were talking about Achyuta Nanda Sahu being murdered by armed Naxals. Their full statement was: 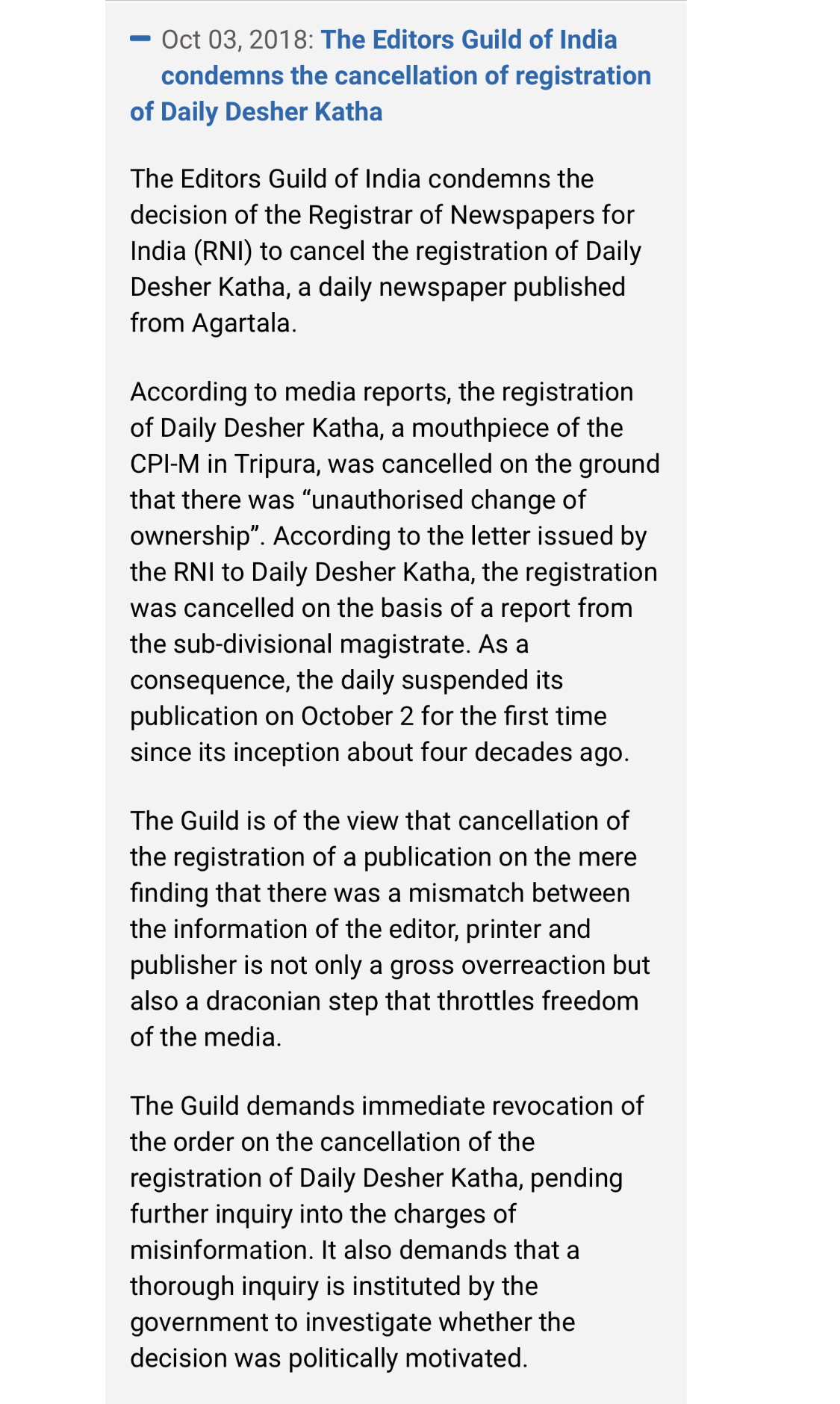 Then there is the phraseology of today’s statement which was extremely interesting. “Attack that killed a camera person”. “Saddened”. “Death of camera person”. “Condolences”. “Urge for protection”.

Compare that with the terminology used in the other two statements. “Strongly condemns”. “Opposed to”. “Blow to democracy”. “Draconian step”. “Demands”, so on and so forth.

In the profession of journalism or any content generation, for that matter, the message that words convey is of paramount importance. A man (or woman) of the letter knows the value a slight change of wording holds. One ought to know the difference between “anger” and “rage”, “saddened” and “outraged”, “death and “murder”, “urges” and “demands”. One would assume that the difference is not lost on the Editors Guild, no less. What then could be the reason for the Editors Guild to issue a pussyfooting, vanilla statement when a journalist has been brutally murdered by armed Naxals while shooting word bullets when a communist mouthpiece’s registration is cancelled for not adhering to the law?

What inspired that Editors Guild to name the two journalists imprisoned in Myanmar under the law of their land, and condemn their arrest in the strongest possible terms, while treating Achyuta Nanda Sahu like a nameless, dispensible pawn?

It is said that a man is not dead till his name is spoken. Even in death, his spirit lives on. He lives on as his name echoes through the ages. The Editors Guild has seldom stood up for the ones who truly put their lives at risk bringing the readers stories from the most dangerous parts of the country. They ignore the very folks who risk their lives to report, so people like them can sit in their air-conditioned chambers and opine on the news they harvested.

The Editors Guild could not even bring themselves to name Achyuta Nanda Sahu. To honour his spirit. To honour his sacrifice. To news. To his job. To the Editors Guild, Achyuta Nanda Sahu was just a cameraman. A pawn that didn’t deserve a seat at the elite table. A pawn that is meant to serve and enable the opinions that the five-star journalists and agenda pushers pen down. He didn’t deserve to be named.

One is reminded of journalist Jagendra Singh, who was burnt alive in Uttar Pradesh allegedly because he posted some news reports about illegal mining and land grabbing by a local Samajwadi Party leader Ram Murti Verma, who was also a minister in Akhilesh Yadav cabinet. The silence of the five-star journalists in Singh’s case echoes till date.

One is forced to wonder if these journalists’ murders are met with a cold shrug and indifference because their work doesn’t cater to the perfumed elite. The champagne sipping circle to which the Editors Guild members and most of the Lutyen’s pen pushers belong.

For the Editors Guild, Achyuta Nanda Sahu didn’t serve their agenda. The communist mouthpiece and journalists covering Rohingya’s in Myanmar did. Democracy, freedom, liberty and rights don’t perish for lowly cameramen, they perish only for communist mouthpieces.