OpIndia
Home News Reports One day after supporting the government, opposition parties back to theatrics by politicising the airstrikes against Pakistan
News ReportsPolitics

One day after supporting the government, opposition parties back to theatrics by politicising the airstrikes against Pakistan 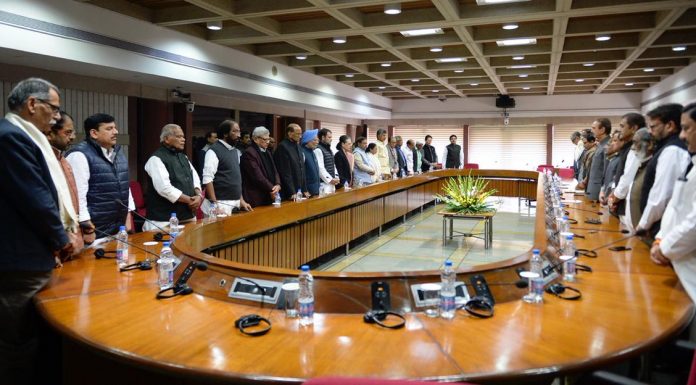 At a time when the entire nation is backing the Indian armed forces and the world is staring at a full-fledged war between India and Pakistan, the opposition political parties of India choose to use this moment to play politics and spreading lies. 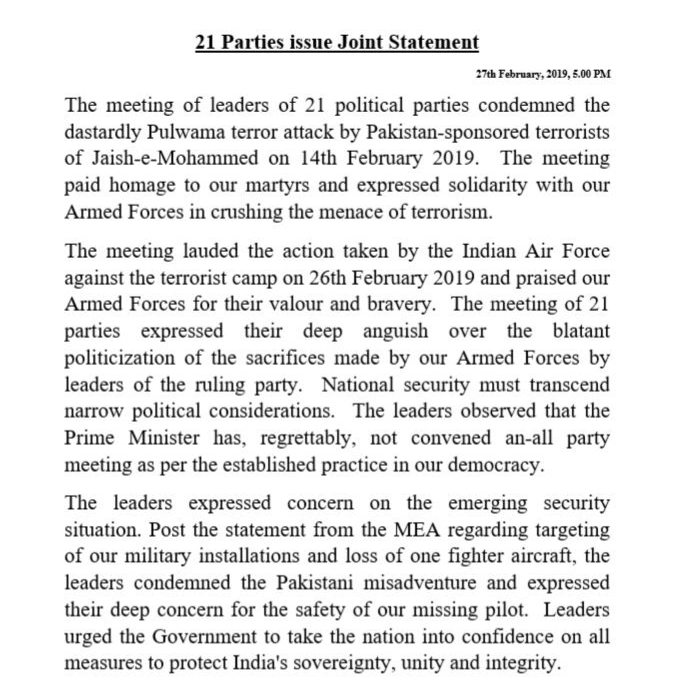 The joint statement added that the meeting of opposition parties lauded the action taken by Indian Air Force against terror camps in Pakistan on February 26, and praised Indian Armed Forces for their valour and bravery. Surprisingly after that, the joint statement says that “the meeting of 21 parties expressed their deep anguish over the blatant politicisation of sacrifices made by our Armed Forces by leaders of the ruling party”. It also says that the Prime Minister has not convened an all-party meeting as per established practice in our democracy.

This is a very unfortunate statement coming from 21 political parties of the nation at this moment. The allegation that the current situation has been politicised by the BJP leaders is false and has no basis. No leader of the ruling party has made any comment that can be described as politicisation. The BJP leaders, including the Prime Minister, has praised the Armed Forces for their action against terror camps in Pakistan, and have reiterated that Pakistan sponsored terrorism will be crushed by India.

On the other hand, it is opposition, including the liberal media, which have been trying to politicise the matter. West Bengal Chief Minister Mamata Banerjee went to allege that the union government had intelligence inputs on the Pulwama attack but did not act on them. She claimed that BJP wants to create a war hysteria ahead of Lok Sabha elections.

Several left-liberal activists and journalists have argued that only Modi and BJP will be benefitted by terror attacks by Jaish. National Herald, the mouthpiece of Congress, has also published articles arguing the same. Some of them have gone ahead and hinted that actually BJP may be behind the Pulwama attack. 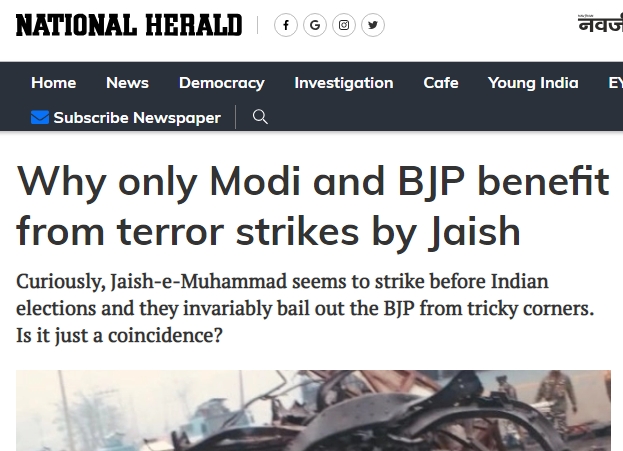 Coming to the all-party meeting, perhaps the opposition parties forgot that just yesterday they had attended an all-party meeting called by the Government of India. Congress leader Ghulam Nabi Azad, CPI(M)’s Sitaram Yechury, TMC’s Derek O’Brian, Omar Abdullah of National Conference were among the opposition leaders present in the meeting. The union government was represented by External Affairs Minister Sushma Swaraj, Home Minister Rajnath Singh and Finance Minister Arun Jaitley. All three of them are also the members of Cabinet Committee on Security. Therefore, it is a blatant lie by the opposition parties that all-party meeting has not been called by the government. Moreover, the situation is still evolving, and the government may call more meetings, which may be addressed by the Prime Minister. To attack the government at this moment on this issue is clearly an attempt to score a political point by the 21 opposition parties.