Modi in America: An opportunity to emphasise ties between the two countries and a testament to PM Modi’s leadership

Modi's strong foreign policy should be given the biggest credit for these achievements. This balance in foreign policy can be seen as an example of the efficient leadership of Prime Minister Modi. 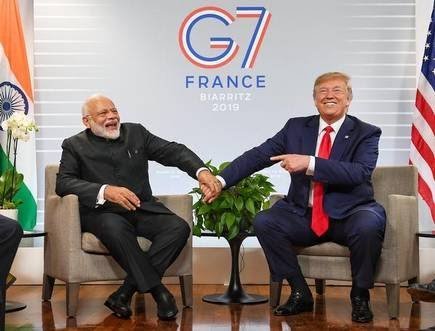 In 2005, the current Indian Prime Minister Narendra Modi, when he was the Chief Minister of the Indian State of Gujarat, was denied US diplomatic A-2 visa. In addition, the B-1 / B-2 visa previously granted to him was revoked under a section of the “Immigration and Nationality Act”. This section disqualifies anybody, a US visa by holding any foreign government official responsible for “serious violations of religious freedom”.

Surprisingly, Modi is the only person barred from travelling to the United States under the “International Religious Freedom Act (IRFA)” provision of the US “Immigration and Nationality Act (INA)”. In 2012, a Special Investigation Team (SIT) appointed by the Supreme Court of India found no “prosecution evidence” against Modi and cleared him of all charges. When Narendra Modi became the Prime Minister of India in 2014, the US visa issue came to the fore as a diplomatic hurdle in bilateral India-United States relations.

Times have changed and today America stands outstretched to host one of the world’s most influential Prime Ministers representing a large part of the world’s population. The India Forum of Texas (TIF) in Houston, Texas has organized a community summit for Prime Minister Narendra Modi on Sunday, September 22. More than 50,000 people have registered in three weeks to join “Howdy Modi”, making it the largest gathering of a live audience for any foreign leader invited in the United States, other than the Pope. “Howdy Modi” is being organized in collaboration with more than 1,200 volunteers and 650 Welcome Partner organizations based in Texas.

The interesting part is, the name of this program “Howdy Modi”, but US President Donald Trump is not far behind in capitalizing on its grandeur, form and popularity of Prime Minister Modi in America. This week, the White House officially announced that President Trump would also attend the event and address more than 50,000 attendees. Trump has attended inaugurations and other ceremonies with leaders of other countries, but his address to the program with a foreign leader is a rare coincidence.

This program can be seen as a good sign for promoting Indo-US relations and for increasing personal intensification between the leaders of the two countries. It is also a matter of coincidence that Prime Minister of Pakistan Imran Khan will also be in the United States at the United Nations General Assembly during this time. Trump’s presence will give a strong signal at a time when Pakistan is planning to raise the Kashmir issue in the UN General Assembly and many US lawmakers have expressed concerns about security and human rights violations in Jammu and Kashmir.

President Trump is convinced of Modi’s popularity in America and during his last election, he also gave the slogan of “Abki Baar, Trump Sarkaar”(This time, Trump Government) on the lines of Modi. This was the first time when any American presidential candidate had appealed to this big vote bank to lure Indian-Americans through a slogan in Hindi. Trump does not want to miss a chance, especially when its elections next year.  His eyes are on the American Indian community and he is well aware that there is a strong possibility of political gains by sharing the stage with Modi. It is also worth mentioning that in this program, along with him, governors, members of Congress, mayors and other officials will also join this bipartisan delegation.

A lively example of Modi and Trump’s friendship was seen during the recent G-7 summit in France where Prime Minister Modi shook hands with President Trump, blossoming like a very close friend. This will be the third meeting between the two leaders this year. Earlier in Japan, the two met during the G20 summit.

The “Howdy Modi” program will surely be a great opportunity to emphasize strategic partnerships and strong ties between the people of the two countries and between the world’s oldest and largest democracies. In the midst of the ongoing tariff war between the US and China and probable signs of the global recession, this meeting has various meanings and undoubtedly paves the path to discuss ways to further deepen trade relations between India and America.

Prime Minister Modi’s huge hoardings have been installed all over Texas, and now Trump will probably be included as well. After the announcement of the White House, the grandeur of this program has grown further and the American media is also taking a special interest in this program. The American Indian community is eagerly waiting to welcome the two leaders.

Modi is visiting the US from 21-27 September to address the United Nations General Assembly in New York. This trip is very important in the present circumstances. The American media has presented the Kashmir Issue from a different perspective. Modi has always impressed with his bold decisions and impressive speeches and many are keenly observing his address to the UN General Assembly on 27th September.

Modi was issued a visa to visit the US on September 2014 after becoming the Prime Minister of India after he was denied a visa in 2005 as the Chief Minister of Gujarat. Then, he was invited by the US administration to address a joint session of both houses of the US Congress, which he did in June 2016. In 2017, he paid a state visit to the US at the invitation of President Trump.

After Modi became Prime Minister, there have been severe criticisms on his frequent foreign visits, but today when at the G-7 summit held in France, of which, India is not a member, is invited as a special guest, seemingly is the implication of those trips abroad and what the Prime Minister has achieved for India.

“Howdy” is an informal term used when meeting friends. This program, which is going to give a new dimension to the concept of “Allied Nations” between India and America, will definitely give rise to new possibilities. In today’s modern era, when the formal distance between the national leaders and the public seems to be decreasing, similarly the term defining the friendship between the leaders of two nations is “Howdy”. The changing developments are a testimony to India’s growing international stature and the growing strength of India.

Modi’s strong foreign policy should be given the biggest credit for these achievements. This balance in foreign policy can be seen as an example of the efficient leadership of Prime Minister Modi.