OpIndia
Home Opinions Devendra Fadnavis government has delivered almost every promise on economy and employment made before 2014 Maharashtra elections: An analysis
OpinionsPolitics

Devendra Fadnavis government has delivered almost every promise on economy and employment made before 2014 Maharashtra elections: An analysis

Current Maharashtra Government has delivered almost every promise they had made in their election manifesto prior to the 2014 State Assembly Elections as far as Economy, Industries and Employment Generation is concerned. 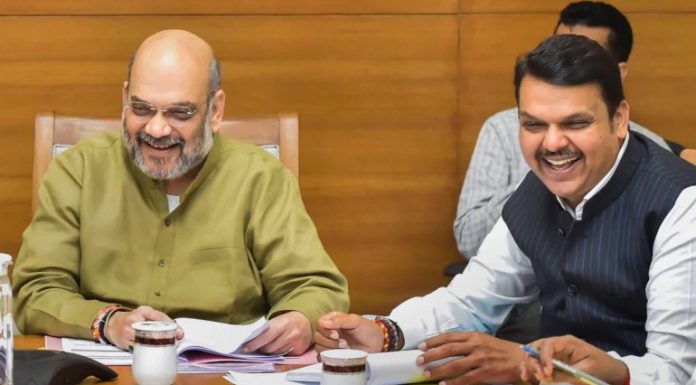 India is home to 135 Crore people, of which approximately 12.60 Crore reside in Maharashtra alone. So 1 out of 11 Indians (9.33%) lives in Maharashtra. Maharashtra contributes USD 360 Billion (12.11%) to the USD 2,972 billion GDP of India. The financial capital of the country is also the states summer capital.

Hence, Maharashtra’s economic progress is key to India’s progress. The present government, led by Hon. Chief Minister Devendra Fadnavis, assumed power in 2014 after 15 years of NDA rule by an assortment of Chief Ministers. He is, in fact, the first Chief Minister of Maharashtra in the last 45 years to complete a 5-year term, a feat last accomplished by Shri. Vasantrao Naik during his tenure as Chief Minister from 1967 to 1972.

Elections to the Maharashtra Legislative Assembly are scheduled for this month. Candidates have filed their nomination on or before 4th October. Votes will be cast on 21st October and counted on 24th October.

I feel it is important to review the current Chief Minister and his government’s performance based on the party manifesto published before the 2014 elections. For the purpose of brevity, I have chosen to focus this analysis on the most quantifiable topic that finds mention in the 2014 Bharatiya Janata Party Manifesto, that is Economy, Industries and Employment Generation.

The analysis presented is a nonpartisan effort to study the promises made and fulfilled by the current government. The focus of my analysis is also to study whether a full-term Chief Minister has a better chance at fulfilling pre-poll promises.

The main objective of this issue in the 2014 Manifesto is and I quote “Bringing the derailed state economy on tracks”. The magnitude of fiscal mismanagement of the state treasury can be understood by this Times of India article dated 21st March, 2013 which goes as far as to compare Maharashtra, once the pride of India, as a “BIMARU” state among the likes of Uttar Pradesh & West Bengal while praising the improvements shown by Bihar over the past decade.

The comparison below is based on data available for 2013-14 and 2019-20. Key metrics of the State finances have been compared against the Gross State Domestic Product.

The biggest take away from this comparison is the stupendous increase in the GSDP from Rs. 11,96,754 Crore in FY2013-14 to Rs. 29,79,556 Crore in FY2019-20. This translates to an annualized growth rate of 16.42%. By promoting growth in the state, the Devendra Fadnavis government has improved upon nearly all the key financial indicators of the state.

“Magnetic Maharashtra: Convergence 2018” was a summit held in Mumbai, India on February 18–20, 2018. The event aimed to attract investments of Rs. 10 lakh crore into the economy of Maharashtra. Special emphasis was given to “AURIC”, the greenfield industrial township being set up in Aurangabad.

Speedy implementation of various pending projects with special emphasis on addressing the regional disparity in the state will be launched.

Various stalled projects have been rejuvenated by the Devendra Fadnavis government. These include projects that were stalled due to environmental clearances, ROW problems, issues with land acquisition, interdepartmental disputes, etc. The list of projects is exhaustive and can be searched online.

The Samrudhi Mahamarg was launched to connect the two capitals of the state. The Mahamarg passes through ten districts of Thane, Ahmednagar, Aurangabad, Jalna, Buldhana, Washim, Amravati, Wardha and Nagpur. Tourism in these areas will get a boost as religious places like Shirdi, Trimbakeshwar and Shegaon and tourism spots of Ajanta and Ellora are located within these 10 districts. This highway, once complete shall reduce the regional disparity across the state.

To ensure that the land owners whose land will be used for the development of the Corridor get maximum benefit out of this project, the government proposed a unique concept of “land pooling”. This helped farmers get maximum compensation.

24×7 access to electricity, water and skilled workforce to industries

The Maharashtra Industrial Policy, 2019 which is an exhaustive document on the future course of industrialisation in Maharashtra was launched by the Devendra Fadnavis Government in March, 2019.

The Government of Maharashtra launched its portal, “Aaple Sarkar” on 26th January, 2015 wherein 398 services across 39 departments were either simplified and made available online or abolished entirely. Approximately 7.50 Crore applications for permissions or licenses were received on the portal since its launch and 7.29 Crore applications have been disposed of within prescribed time frame.

The “Udyog Sanjeewani Yojana” was launched in November, 2015 to revitalize industrial projects which had been allotted land by MIDC and were yet to begin operations. All such units were granted extensions till 2017. The scheme provided respite to over 2000 projects that were stuck due to various reason.

Permission for setting up industries will be decentralised

The Maharashtra Industrial Policy, 2019, provides a single window clearance for all G2B transactions, including permissions. The policy states the following.

Business and investment conclaves will be organized on an annual basis to attract new investment in backward areas of Konkan, Vidharbha and Marathwada

While an investment conclave focused purely on Konkan, Vidarbha and Marathwada regions was promised, the scope was enhanced to cover the entire state of Maharashtra through “Invest in Maharashtra” campaign. The results are phenomenal in that Maharashtra has retained the no. 1 position in FDI in India. Record Foreign Direct Investments have been made in the state. In fact, the quantum of investments in Maharashtra is higher than the cumulative total of the next 4 states in the ranking.

10,48,000 Industrial units have been set up in the state in the last 5 years. The highest number of recognised start-ups in the country have been registered in Maharashtra.

Make Maharashtra a hub of fast-growing sectors such as e-retailing and logistics.

Retail Trade Policy, 2016 was published in 2016. The Maharashtra Shop & Establishment Act, 2017 has also been introduced further simplifying the operations of retail enterprises. The state government has also announced its “Logistics Parks Policy 2018” in Feb, 2018 to promote the logistics business.

LBT was abolished in Maharashtra on 1st August, 2015. Octroi collection continued in Mumbai until implementation of GST.

Reduction in petrol and diesel prices in the state by restructuring taxes.

This might have been an electoral promise by the party, when Crude Oil prices were at its peak. Subsequently, the Crude Oil prices relaxed and the Government might not have had to interfere on this front.

New Energy Policy will be framed, considering the current and future needs of energy. Emphasis will be on power generation and curtailing transmission and distribution losses.

Maharashtra will eradicate load shedding within one year

Electricity Load Shedding, was eradicated by the current Devendra Fadnavis Government in 2019.

Purchase of coal will be made transparent and it will be made mandatory for power plants to function at full installed capacity.

A National Coal Policy, which defined Coal as National Resource was put forth by the Government of India. This policy has dealt with this pertinent issue.

Policy to encourage power generation using non-conventional energy sources such as solar, wind, bio-mass, and sea wave-energy will be introduced.

Minimum 10 hours power supply per day will be provided to water pumps for agriculture.

A separate Agri-Feeder power line is available to farmers for water pumps used in agriculture. There is 8-10 hours of power supply, typically at night, available on these Agri-Feeder lines.

Systematic efforts will be made at the government level to make Pune as the new IT capital of India. An IT Industrial Area Development Authority will be established in Pune. This model will be replicated to support the IT sector in other cities such as Nagpur, Nashik, Aurangabad and Kolhapur.

The Maharashtra IT/ITeS Policy, 2015 was published to achieve these goals. It consists of a comprehensive road map for the IT/ITeS business’ in the state.

Maharashtra to have the fastest broadband network in India

Maharashtra has achieved the distinction of having the highest number of Broadband connections in the state with 44.24 Million subscribers enjoying speeds of above 2 MBPS.

Based on the above, one can safely say that the current Government has delivered almost every promise they had made in their election manifesto prior to the 2014 State Assembly Elections as far as Economy, Industries and Employment Generation is concerned.

Another important observation that can be made is Devendra Fadnavis could achieve all the above because of an unhindered stint of 5 years as Chief Minister. I am now eagerly looking forward to the 2019 Bharatiya Janata Party manifesto to understand his vision for the next term.