The implosion of AAP – churn or crash and burn? 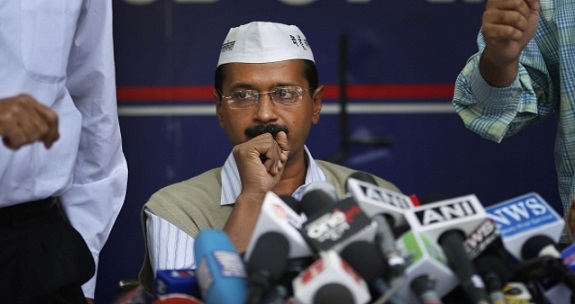 Arvind Kejriwal’s Aam Aadmi Party is still in stages of infancy if we are to compare it with the other political parties in the fray. Less than 4 years into the game, AAP has racked up considerable successes in its repertoire. The biggest success of course is its unprecedented landslide victory in Delhi. In other places across the country, it hasn’t tasted much electoral success, but has been trying to position itself as the go-to party for someone who doesn’t want to vote for the BJP or the Congress.

Being Delhi centric, and owing to the friendly disposition of many top journalists towards Arvind Kejriwal, AAP has got more than its fair share of limelight. We have seen occasions where even PTA meetings have been glorified by “journalists” as a landmark moment in governance. Given the over-the-top positive acclaim received, AAP has also faced a higher level of barbs and attacks from its critics as well as opponents. Countless U-Turns, allegations of corruptions, frauds, donations scams, all have hit AAP. But all said and done, AAP has braved the fire from outside well.

Now, AAP is facing a different challenge. This time the enemy is within. We had last seen this when the founding fathers of AAP like Prashant Bhushan, Shanti Bhushan and Yogendra Yadav were unceremoniously booted out of the party. At that time, they claimed they were unhappy with Kejriwal’s dictatorial attitude, while Kejriwal’s coterie suggested they had other grudges. It was in the end painted as an ego battle.

This time though, things are much worse. AAP has faced one of its toughest weeks in its short political existence. Their own leaders have been the reason for much of the discomfort and this time, one cannot dismiss it as mere ego wars.

It started in Punjab, where AAP’s state convenor Sucha Singh Chhotepur was allegedly caught in a sting operation, accepting some sort of bribe. If some rumours are to be believed, it was an inside job from within the AAP. This eventually led to Chhotepur being sacked. Chhotepur episode had a ripple effect in Punjab, the full impact of which is yet to be seen, but till now these are the scalps it has claimed:

Firstly Siddhu’s much touted entry into AAP did not materialise, partly because his demands were rejected, and also possibly because of the mess that AAP Punjab was in.

Secondly, AAP’s credibility was obviously damaged, since their top leader in Punjab was caught in a sting

Thirdly, Chhotepur caused many splits in AAP Punjab. Factions loyal to him have threatened to leave AAP, and already, 80% of AAP office bearers of Amritsar zone have quit citing “dictatorial behaviour” by party observers from outside Punjab.

As mentioned, the full extent of the damage is yet to be seen.

If Punjab was one big pile of mess, Delhi has been worse. Yet another AAP cabinet minister had to be sacked and this time for extremely embarrassing reasons. Women and Child Development Minister Sandeep Kumar was sacked after his sex videos with 3 different women emerged. It was also reported that he misused his official position to secure a US citizenship for his newly born son.

Although Kejriwal tried to limit the damage of Sandeep Kumar by sacking him before the news broke out, the aftermath has been more damaging. AAP leader Ashutosh brazenly defended Sandeep Kumar’s sexcapades by trying to pull down national icons like Nehru, Gandhi and Lohia among others. A former colonel and AAP MLA from Delhi, Sehrawat opened another can of worms by writing a scathing letter to Kejriwal claiming that women are being used duped and exploited in Punjab too. He even went on to name leaders like Sanjay Singh, Dilip Pandey and Durgesh Pathak. Singh now is considering filing a defamation case.

The other state where AAP was trying to grab a foothold was Goa. Even here it has been been weakened. A few months back 9  members of the Vasco Unit of AAP left the party alleging that the party had fallen prey to the real estate lobby. Just yesterday, 2 more AAP leaders and former activists quit Goa’s AAP unit, making very similar allegations. Local developments coupled with the national developments have resulted in a loss of momentum here too with AAP supporters openly lamenting their party’s downfall.

To top all of this, now Arvind Kejriwal’s mentor has come down hard on AAP and Kejriwal. He has said he is very angry and very disappointed at AAP and Arvind Kejriwal, because of all the scandals it has been embroiled in. Anna further said that he had warned Kejriwal about a dilution in quality thanks to his ultra-ambitious moves. This in fact the same as what Prashant Bhushan was saying when he too was on the verge of quitting.

If an analogy can be drawn, we can look at numerous tech start-ups in India who are now facing rough times. They started off with promise, innovative techniques which threatened to disrupt existing market forces. Valuations soared as a select few players backed them. The race for revenues began as all these startups tried to expand aggressively, scaling up operations. But the internal systems, practices, goals of many were not mature enough to handle such massive growth plans, resulting in an implosion. Many of these start-ups have now begun their way downhill, sacking many employees, and boasting of much lower valuations.

AAP too has gone wrong in the same way. It tried to expand its foot-print beyond Delhi too soon. Systems were not in place, and in order to expand, they had to compromise severely on the quality of its inductees. Traditional parties have undertaken years of struggle to reach their current status. They have toiled from the bottom-up, creating a strong cadre, making their stand on issues clear, winning local elections, then state elections and finally heading for the central level. AAP on the other hand is more interested in the flash-bang method which demands quick results. And it has gone very bad for them. The chickens are now coming to roost.

The question now facing us is this. Will this be the 2nd round churning from within the AAP, when all the unwanted elements will desert AAP, and AAP will continue its march ahead? Or will AAP this time lose its absolute core, and with it, its charm and charisma? Only time will tell, but this time, AAP only has it’s own self to blame.