Fake news against Smriti Irani a ‘punishment’ for taking on Rahul Gandhi? 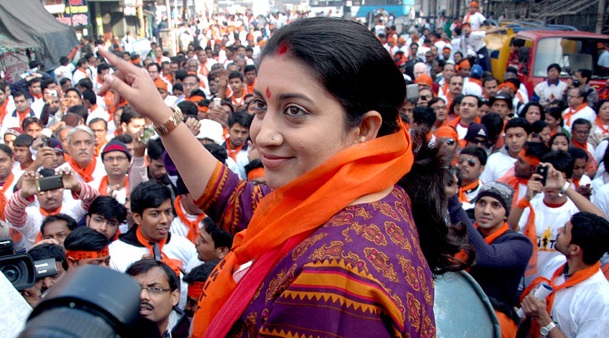 Onslaught against Union Minister of Textiles Smriti Irani is not new to the world of news. Ever since she took on the Gandhi scion in Congress bastion Amethi, she has been a regular target of attacks from Congress and its hit-job brigade.

Latest in the series of planted stories against Irani is her husband Zubin Irani’s involvement in an alleged land grab case in Madhya Pradesh.

Here is a fact sheet of the case on which the Congress was pining its upon to target Smriti Irani:

Congress supporters still tried to sensationalize the issue but could not succeed owing to the lack of substance in the story.

Shifting goal posts, Congress supporters then started sharing another news article, this time in Patrika daily, which stated that registry of a piece of land owned by Smriti Irani’s husband was done at the residential address of former Riva MP.

Now let’s see the facts in this case too:

It is not surprising that the land, which was purchased by Zubin Irani in his personal capacity last year, suddenly became a topic of interest for Congress. They never cared to explain what was wrong in buying a land legally.

It appears that Congress is desperate to create some counter allegations after the Gandhi family was found embroiled in land deals. The party is further scared about the family’s image after BJP won 4 of 5 assembly seats falling the Lok Sabha constituency of Rahul Gandhi. The party is afraid that Irani might beat Rahul in the next Lok Sabha elections.

As the not-so grand old party contemplates to coronate Rahul Gandhi as the Party President this year, they are working to try and build his credibility. And Smriti Irani’s work in Amethi is doing no good to them. Irani’s strong presence in Amethi has compelled Congress to resort to cheap tricks against her in an attempt to restore Rahul’s credibility as Amethi MP.

Recently, due to efforts of Smriti Irani, Rahul Gandhi was forced to vacate hospital guest house in Munshiganj that he was using for personal-political purpose. Hospital run by Sanjay Gandhi Trust had illegally given hospital premises to Rahul Gandhi. Land meant for free health services to poor was given to Rahul by trust.

Recently, Smriti Irani had informed that the Jagdishpur Steel factory will soon resume its operations. Rahul Gandhi, despite having Congress government at the center for 10 years was not able to re-open the steel plant that was shut down soon after it started. Many local people were promised jobs, which they never got.

Apart from this, there are cases like Amethi-Unchahar railway link, land grab allegedly by Congress to benefit a Cycle company, and others. These examples show the commitment of Irani to the people of Amethi even though she had lost the elections. With some of these cases being related to land grab, it is not surprising that a fake land case is being leveled on her husband to extract ‘revenge’.