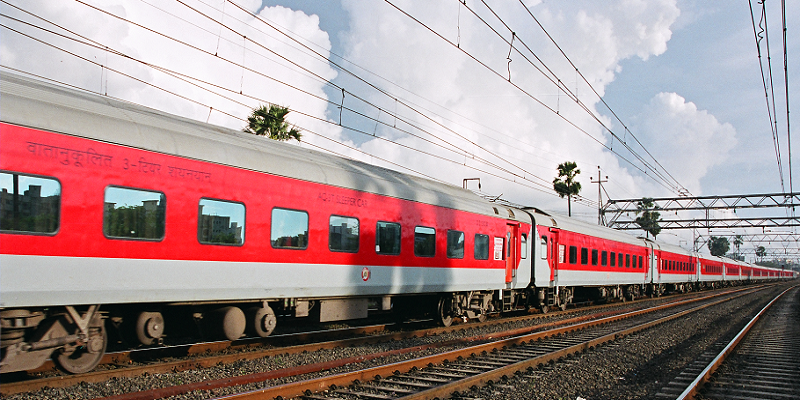 Indian Railways or as some call it the lifeline of India, runs 12,617 passenger trains everyday on its 115,883 KMs of track carrying 23 million passengers daily criss-crossing the length and breadth of the country over 7589 stations. In context, it moves the entire population of Australia everyday. Additionally, 7,421 freight trains carry 3 MT (Million Tonnes) freight everyday in almost 239,381 wagons and 9549 locomotive. Staggering numbers, isn’t it?

However, when you hear “Trains” in Indian context, what is the 1st picture that comes to your mind? Cranky blue metal pieces with iron railings jam packed with passengers standing in a crowded and filthy station? Well, that is how Indian railways has been, as long time we can remember. But why Indian Railways, which is rightly called the lifeline of India is caught in a time warp? We will try to explore in the 1st edition of this “Know Your Railways” series.

There are 2 primary aspect that I am going to cover. Why our trains are not aesthetically pleasing and why our trains are perennially late. The present article with focus on the 1st issue and we will cover the second problem which is closer to most of our hearts in the next edition. In upcoming editions we will discuss about solutions, future and of course “Bullet Trains”.

To figure out the 1st puzzle, let’s turn the pages of our history. The 1st train on Indian soil ran between Bombay (as it was called then) to Thane in 1853, on a track built by a British railway company called Great Indian Peninsular Railway (GIPR). Since then, till 1955, the coaches of Indian railways used to be of wooden frame when the Swiss Car and Elevator Manufacturing Company, Switzerland designed the all Steel, integrated frame using the most advanced technology available at that time. The same company also helped establishing the ICF (Integral Coach factory) in Perambur, Chennai and that is how the coaches got their name, the “ICF” coaches.

The coaches, no doubt, were one of the most advanced coaches of the 50’s but guess when was the next upgradation of the coaches in Indian Railway happened? 1995. Yes, that’s not a typo. For 43 years, there was never a significant technical upgradation to the coach structure or livery as the world moved from conventional loco hauled trains to Bullet trains and Maglevs.

In 1995, government for some reason decided to have a technology upgrade to the coaches and invited bids. That was the birth of the new Linke-Hoffmann Busch from Germany or LHB coaches as they are popularly known. They are made up of Steel plus Aluminium, they are lighter, designed for higher speeds upto 200 KMPH, have more passenger capacity, are relatively quieter, anti telescopic i.e. less prone to turn over or flip in case of an accident or derailment. They feature modular interiors which are more airy, have better hygiene, aesthetically pleasing and have a better finish with quality materials used for interiors.

But, LHB still constitute only a minuscule percentage of Indian Railways rolling stocks, currently mainly used for marquee trains like Rajdhani, Shatabdi, Tejas, Antyodaya, Humsafar and other premium trains. Most of IR rakes are still 1955 technology rolling on our tracks. The reason, as usual, is the “Chalta hai” attitude. There is no motivation. There is no competition. IR is the only rail company in India. Why would someone innovate when there is no incentive. As a result, the coaches today are a living example of bad workmanship, poor finish and total lack of imagination.

More than the good looking rakes, at a time when we read the news of a derailment almost every week, LHB coaches come as a blessing. They are anti-telescopic and won’t pile up, something which the ICF coaches are infamous for causing huge casualties. Compare the recent derailment of Utkal Express with Dibrugad Rajdhani derailment in June, 2014. In fact a statistics brought out by Indian Railways audit report says If a fast-moving train with ICF designed coaches derails, the deaths and injuries will be 25 times higher as compared to a train composed of LHB coaches.

So you would wonder, if LHB coaches are so awesome then why not have all Indian Railways rakes constitute of LHB coaches? We have got manufacturing facility at RCF, Kapurthala and ICF also manufactures them. We have a upcoming facility at Rae Bareli. So why are we still producing those 1955 metal boxes. Well, as usual with any Indian public utility system, the solution is not so simple. ICF and LHB coaches use different coupling technics with ICF using a 60 year old Screw coupling, IR probably being the only large railway in the world still using this coupling technic. In fact, this is one of the main villain why ICF coaches pile up on each other in case of a derailment. LHB uses more advanced Centre Buffer Coupler(CBC) which is why LHB coaches have less jerk, allow more speed and do not turn turtle in case of a mishap.

What the above means, for a non technically inclined reader is, you can not couple a LHB coach with an ICF coach i.e you can’t have a mixed rake. You can have a mixed type coach though, where a LHB shell is mounted on a ICF bogie, Duronto rakes for example.

A special note for for our media. What you keep calling bogies are not bogies. This is a bogie and what we travel on is called a coach.

Hence, in an ICF rake, when a coach outlives it’s 25 years codal shelf life, it has to be replaced by an ICF coach only. You simply can not stop producing these metal boxes because you are already in a vicious cycle of maintaining a huge rake running on these boxes. While the previous governments have to be blamed with continuing with these stone age technology, it made absolutely no sense for the current government to introduce brand new trains with ICF rakes, the Mahamana Express introduced in 2016 between New Delhi and Varanasi or the Dindayalu express for example. It means, they made no effort to come out of the vicious cycle.

And that is not the only problem. IR has 7000 passenger trains & 42000 coaches. Keeping 5% as reserve, it leaves 6 coaches per rake. IR’s coach manufacturing units aren’t supplying enough. For that to happen, we have to come out of the PSU/ state owned manufacturing units mode and outsource coach manufacturing to people who specialise in that, Alstom or Bombardier for example who already have facilities in India. In fact Bibek Debroy committee report already suggested that IR should focus on it’s core business of running trains. Building locos and trains are specialised areas best left to specialists.

Of course there are other problems with IR than just “Looking Good” but this aspect will help regain at least some of the lost fame. Would you mind if your train looks like this and is 3 hours late. You would, of course but will still not curse IR as you do today, right?

The new rail minister Shri Piyush Goyal has said the manufacturing of ICF coaches is to be stopped completely. This would probably mean that now entire ageing rakes will be replaced by LHB rakes, lots of rake sharing has to change, lots of status quo has to be shaken. We wish Shri Goyal good luck with that. Hope it can be done sooner than 2040.

Also read the other two articles in the “Know Your Railways” series:

Part 2: Know your Railways: Why our trains are perennially late

Part 3: Know Your Railways – High Speed Rail and why India needs it to progress