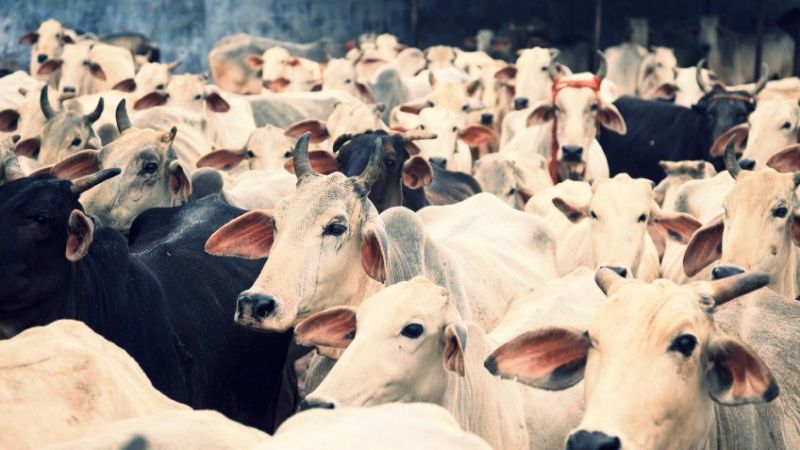 A Journalist from India Today group has been attacked by a Muslim mob in the Ramnagar district of Karnataka. The incident took place during a search operation conducted by the animal activists and the police officials in Kodipalya village of the district.

India Today has reported that a reporter from the media group had accompanied few activists to the raid on an illegal slaughterhouse. Reportedly, the police initially refused to provide any protection to the animal activists to enter the slaughterhouse and the police officer cited lack of force to contain the law and order situation after the raid. But later he provided two men to carry out a raid on the next day on the illegal slaughterhouses run by few by Muslim men.

The activists raided the slaughterhouse next day to find out a large number of bones, skulls, calf intestines on the ground along with the blood. Reportedly, more than 200 newborn calves are being slaughtered at that place every day. Animal rights activist Joshine Anthony was also on the site when the raid was conducted.

The Muslim mob also broke his phone and threatened the journalists, as the police were just mute spectators. It is alleged that there is some nexus between the meat mafia and the police, as the information about the raid got leaked as soon as the activists had informed the police.

The goons are identified as Gazipeer, Khasi, Syed, Mubarakhan, Noor, Imthiaz and Tabrez, all hailing from Ramnagar district. The police have lodged FIR against all the seven accused under IPC sections 428 and 429 (mischief by killing or maiming animal). The police are yet to register FIR for attacking the journalist.

It is strange to see that none of the fellow journalists has condemned the attack on the journalist. The Editors Guild of India has also remained silent. It also came under severe criticism lately for ignoring many such attacks on journalists carried out by specific minority groups.

The critical aspect when it comes to the issue of the protection of cows in the country is the sheer amount of crimes committed by groups who are into cow smuggling and illegal slaughtering. The intensity of the illegal cow smuggling and slaughtering in the country is on the rise. Some state governments like Uttar Pradesh has taken steps to ensure that there is no illegal cow slaughtering by banning them. It is unfortunate that the mainstream media has deliberately ignored to present these facts relating to crimes committed in the name of the cow.