More
Home Opinions 2019: Why BJP needs to build its own Vijaynagar and supporters need to defend...
FeaturedOpinionsPolitics
Updated: 18 March, 2019

2019: Why BJP needs to build its own Vijaynagar and supporters need to defend it with all they have

As 2019 approaches, it is natural for BJP supporters to feel some version of the fear that Hindus have faced over the ages. Fear can be a productive emotion in as much as drives away complacency and forces people to do their best. As long as you don’t let it become a self-fulfilling prophecy.

I am currently on vacation in Hampi and yesterday I happened to pick up the book “Vijaynagar: A Forgotten Empire”. It is written by one Robert Sewell, a British civil servant and was first published more than 100 years ago. Here is a page that I found to be very telling. 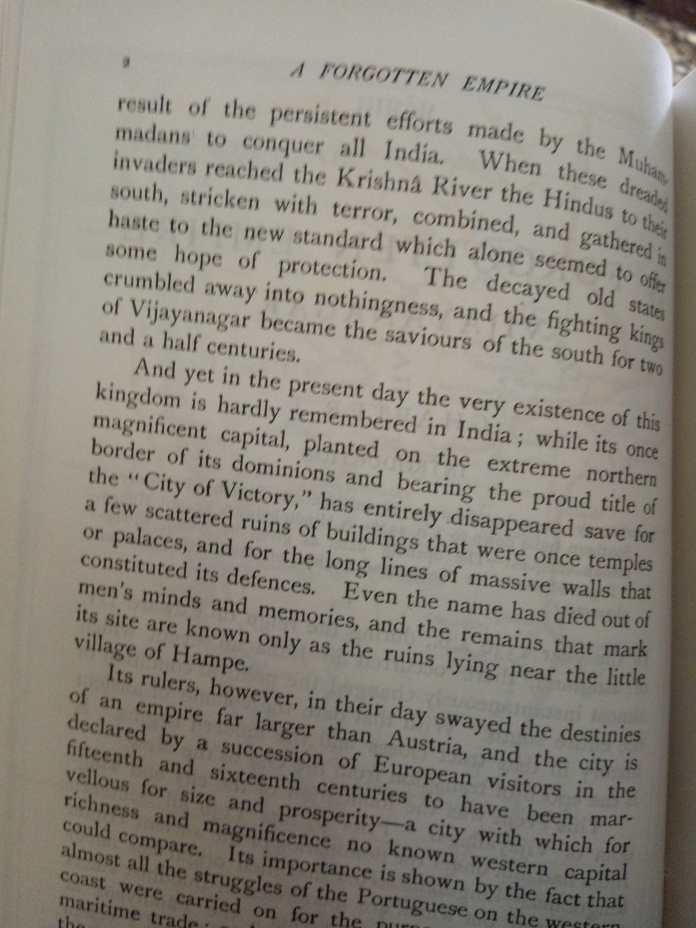 When Muslim invaders reached the Krishna river, the Hindus of South India gathered under the banner of the Vijaynagar Empire, which offered them protection for two hundred and fifty years.

It is a good thing that this is a reprint of a book that was originally published one hundred years ago. That’s why you get this frank admission of facts. The clear acknowledgement of the kind of daily terror and oppression that made up the daily lives of Hindus for eight hundred years.

Can you imagine a modern-day JNU type historian approaching the same subject? They would cover it up under so many banalities (and outright lies) of Ganga-Jamuni Tehzeeb that you would wonder why invaders even had armies when all they wanted to offer was the richness of their culture, music and literature.

Besides, the Break India forces that seek to build up regional pride in the South as a form of opposition to Hindutva should read this for a bitter dose of real history. The South of India is the historic fortress of Hindus. Take that.

The elections of today do not involve a battle (outside Bengal, at least) but their ebb and flow is no different in character from the battles of the past. The media, the politicians, the so-called political analysts and even ordinary people consistently use battle metaphors to describe electoral contests. In this sense, 2019 is no less than a war and a civilizational one at that.

Amit Shah is doing the right thing, creating fear in the minds of BJP’s foot soldiers that a defeat in 2019 could set the ideological battle behind by 25 years. One should remember just how momentous the victory of 2014 was. It was the first time a non-Congress party crossed the majority mark in the Lok Sabha. It was the first time in history that the Congress was ever surpassed by a party in terms of vote share (Janata Party in 1977 was a mere conglomeration of diverse parties and doesn’t really count). In 1996, 1998 and 1999 elections when BJP emerged as the single largest party, the Congress still had more votes.

It is up to the BJP’s workers, its supporters and sympathizers to ensure that the 2014 victory is cemented by a follow up in 2019. That the 2014 win does not end up like that of Hemu over the Mughals in 1556. Securing an additional 0.5% of the votes would have won BJP both Rajasthan and Madhya Pradesh. Will these electoral battles end up like the famous freak arrow that hit Hemu in the eye at the Second Battle of Panipat and changed the course of India’s history?

Nevertheless, in order to survive a possible adverse outcome in 2019, the BJP must build up and protect its own “Vijaynagars”: fortresses that can give protection against the invasion of the “idea of India”. From 2004–2014, the Western belt of India running from Gujarat to Chhattisgarh through Madhya Pradesh formed this bulwark. But now Madhya Pradesh and Chhattisgarh are gone and it is not clear what will happen in 2022 when BJP tries to win Gujarat for the seventh time in a row.

It is time for BJP to build new Vijaynagars. Where might these be?

The very first of these that comes to mind is the North East. This land has become the apple in the BJP’s eye and the thorn in the flesh of Indian ‘secularism’. They assumed that BJP could never go beyond what they condescendingly called the “cow belt” states. And a saffronized North East, which is seeing development for the first time in seventy years, is causing a deep itch in Lutyens Delhi.

But the BJP also needs big states and you can’t find those in the North East. Luckily there are two big Vijaynagar” opportunities that present themselves.

The first is Uttar Pradesh, where the BJP has crossed the 40% barrier in vote share. It now polls about 43% of the votes. Yes, the party might have some bad luck there in 2019 because the SP, BSP and Congress combine enjoys a 50% vote share, but these parties cannot possibly stick together all the way till 2022. Especially if they manage to get some kind of power in 2019. Even accounting for a loss of few % of votes due to incumbency, the BJP can sweep Uttar Pradesh in 2022 as soon as the grand alliance falls apart.

On another side note, pay no attention to some talking heads who have been trying to manufacture a contradiction between saffron clad Yogi and “Vikas”. Look no further than Madhya Pradesh, where Kamal 1984 Nath is set to become Chief Minister to the delight of every liberal soul in India. And Yogi Adityanath has never faced any allegation even close in seriousness to the kinds that Kamal 1984 Nath has faced. It is clear that India’s liberals don’t object to any perceived form of communal politics, they object to any form of Hindu assertion.

Ask Akshaya Patra in Karnataka, which is now facing an onslaught from the ecosystem despite serving more than 2 billion meals to schoolchildren. What could be more wholesome and more uplifting than that? They don’t object to any specific form of Hinduness, they object to Hindus as a whole.

The second place that could become BJP’s Vijaynagar is the state of Maharashtra. Four and a half years ago, the BJP made a historic jump from No. 4 to No. 1 in the state. And Devendra Fadnavis has barely even lost a round of municipal elections yet.

There is, however, a catch when it comes to Maharashtra. The elections in Maharashtra happen barely 3 months after Lok Sabha elections. As such, a poor national outcome for the BJP in 2019 would push the Assembly election into a honeymoon period of the new government. The BJP government in Maharashtra doesn’t deserve this. If the Assembly were dissolved now so that Lok Sabha and Vidhan Sabha elections could be held simultaneously, there is no doubt that Fadnavis would be at an advantage.

But, it is up to BJP President Amit Shah to manage a favourable deal with the Shiv Sena in the Assembly elections were they to be advanced to May 2019.

As 2019 approaches, it is natural for BJP supporters to feel some version of the fear that Hindus have faced over the ages. Fear can be a productive emotion in as much as drives away complacency and forces people to do their best. As long as you don’t let it become a self-fulfilling prophecy.

’Guilty until proven innocent?’: Ex-BARC chief’s daughter makes yet another appeal to Maharashtra CM as her father’s health deteriorates

The production warrant has been submitted on January 7 before the Chief Judicial Magistrate (CJM) court in Indore and the Indore Central Jail, where Munawar Faruqi is serving his judicial custody.

Ravish Kumar apologises for spreading fake news about paddy procurement by govt after letter to NDTV by PIB: Here is what he said

All you need to know about Jhanvi Kukreja murder case, the teenage girl who was brutally killed at a New Year party in Mumbai

What the Nidhi-Harvard story reveals about our world: Get off your high horse, you are not that special, anyway

Saayoni Ghosh claimed that her account was hacked and she didn't posted the image in 2015, but netizens proved she is lying
Read more
Entertainment

‘Not a single NPA in the three decades of its existence,’ Adani Group rubbishes Subramanian Swamy’s allegations

On Friday, BJP MP Subramanian Swamy had put out allegations on Twitter against Adani accusing him of non-payment of loans worth Rs 4.5 lakhs, which has allegedly turned into an NPA.
Read more

Bihar: Transgenders to be recruited into police either through direct appointment or competitive exam, reservations to be provided

The Bihar Police will now recruit people from the transgender community into its ranks and provide them reservations.
Read more
News Reports

’Guilty until proven innocent?’: Ex-BARC chief’s daughter makes yet another appeal to Maharashtra CM as her father’s health deteriorates

Prithviraj Chavan has admitted that it was the Mumbai Police which leaked the private WhatsApp chats of Arnab Goswami.
Read more
Crime