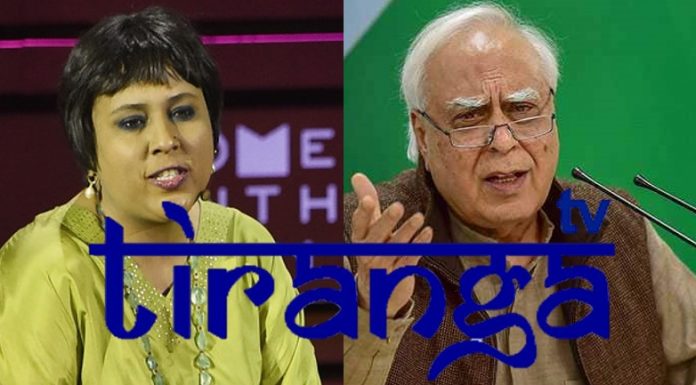 The crisis at Kapil Sibal backed English News Channel Tiranga TV seems to be mounting as senior journalist associated with the channel Barkha Dutt today spoke against the way the channel is being run.

The controversial journalist of Radia tapes fame posted several tweets today about the “appalling situation” in the channel promoted by Kapil Sibal and his wife. The channel has fired several of its employees in the last couple of weeks, and it has been taken off from some DTH platforms.

Although the sacked employees of the channel had been narrating their situation on social media for last couple of weeks, there no much detail available about the situation. But now the tweets by Barkha Dutt reveal how deep the crisis at Tiranga TV is.

Making a sensational disclosure, Dutt revealed that equipment have confiscated from more than 200 employees who now face sacking from their jobs. Confirming that the employees have been asked to leave without adequate payments, she wrote that “Man who acts holier than though (sic.) in public has treated journalists in a hideous way”, commenting on Congress leader Kapil Sibal.

An appalling situation in @NewsHtn promoted by @KapilSibal & his wife, where more than 200 employees have had equipment confiscated and face sackings without even a 6 month pay out. Man who acts holier than though in public has treated journalists in a hideous way

Confirming the allegations of the sacked employees, Barkha Dutt said that most people in the channel had left their existing jobs to join the then Harvest TV (later renamed to Tiranga TV) on the assurance from Kapil Sibal that the organisation will be run professionally and they will have a minimum tenure of 2 years. But all live programming has been cancelled for 48 hours, she informed.

Barkha Dutt accused Kapil Sibal’s wife of being insensitive to the plight of employees. According to the former NDTV editor, Promita Sibal who runs a meat factory said, “I shut down factory without giving a paisa to labour, who are these journalists to ask for 6 months salary.” Kapil Sibal earns crores every day but he wont pay 200 employees industry norm of 6 months or at least 3 months pay out, ruining the lives of 200 plus people, she tweeted.

Barkha Dutt also revealed that Kapil Sibal and his wife planned to blame Modi for the sacking of the employees accusing that the government didn’t let the channel run. But the fact is, the government has done absolutely nothing, hence that excuse could not be used. She informed that instead of facing the employees, the Sibal couple has gone to London while shutting shop here, prompting her to call him Mallya.

Am told @KapilSibal & wife wanted to use Modi as excuse to sack staff saying Modi didnt let channel run. But to be absolutely blunt. GOI has done nothing. Husband and wife have not faced staff, went on holiday to london, while shutting shop, prompting me to call him Mallya

The host of ‘Democracy Live’ show on Tiranga TV informed that the promoters of the channel threatened her with defamation for comparing Sibal with Mallya, and had ordered her to withdraw her emails. But she has refused to do so and said that she supports the employees of the channel, and she will fight the case with a criminal case.

Worst of all, @KapilSibal & wife have referred to female staffers as “Kutiya”or Bitch. This is a fit case for NCW @sharmarekha & we will place signed affidavits to prove our case.

Barkha Dutt also revealed that Kapil Sibal and his wife abused the female employees by referring to as “Kutiya” or bitch. She said that it is a fit case to be filed with National Commission for Women and they will be submitting affidavits in the regard.

There has been more than ocassion when @KapilSibal has embarrassed himself. But a man who earns in the crores, duping and cheating journalists with a 2 year guarantee & then sacking them without the decency to even meet them, and then refusing to pay their dues- truly revolting

She also revealed that Tiranga TV has not paid salaries to her and other senior employees for a year, and refuses to pay the same. Barkha Dutt requested her friends in media and everyone else to tweet to Kapil Sibal asking him to make the due payments to the staff of the channel.

It is not sure whether Barkha Dutt intends to leave the channel. When we checked on TV, we saw that the Tiranga TV was running promos of her program. Barkha Dutt’s show Democracy Live was last broadcast on 11th July. Although she tweeted that live programming has been cancelled for 38 hours, we found a live news bulletin running on the channel at the time of publishing of this report.