More
Home Opinions Does Pakistan realize they are also the laughing stock of the Muslim world?
Editor's picksGovernment and PolicyOpinions
Updated: 12 August, 2019

Does Pakistan realize they are also the laughing stock of the Muslim world?

What a difference fifty years have made. Among many other things, Narendra Modi has ensured that the Muslim world siding with India over Pakistan has avenged that humiliation.

This just in. The Saudis are going to invest in a 20% stake at an enterprise value of $75 billion and it’s going to be India’s biggest FDI deal. 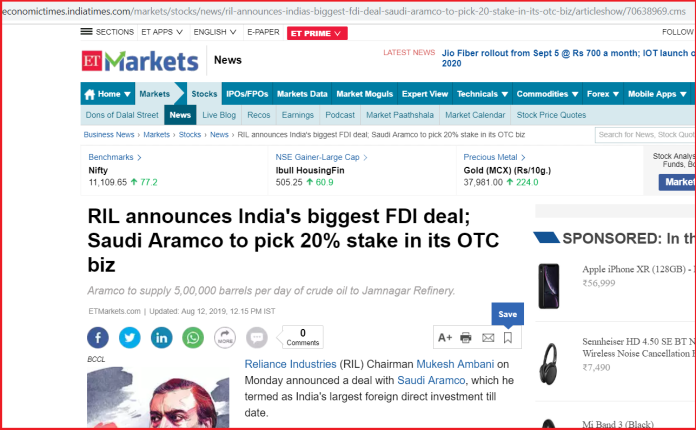 The Saudis are smart. They are rich. They know how to stay rich. And they want to get richer.

That’s why they invest in India.

Meanwhile, Pakistan, the self appointed protector of the Muslim world, is trying to make a mark by starving itself of tomatoes after cutting off trade with India.

Other counter measures announced by Pakistan to India’s move on Article 370 include : muted Eid celebrations today, watering down their own independence day celebrations on Aug 14 and observing “black day” on Aug 15. Other ideas on the table include “unsubscribing” Indians on Youtube. This is not a joke. Actually, it literally isn’t. I suspect several Indian “liberal” youtubers might lose a lot of subscribers if Pakistanis go ahead with their threat.

In the meantime, as Pakistan has cut off a trade with India and deprived itself of tomatoes, the smart Saudis have invested billions of dollars.

The message from the world is clear : nobody takes Pakistan seriously, least of all the Muslim world. The Pakistanis are at liberty to make fools of themselves.

In the last few years, we have seen a definitive change in the attitude of the world towards India. India  can now pull off surgical strikes across the LoC, or even airstrikes on terrorists across the border and no nation dares object. This is partly due to the realization that Pakistan has nothing to give anybody except terrorism. The other part is due to the large and forever growing economic influence of India.

Would you believe that the Pakistani Air Force tried to intervene in the 1974 Yom Kippur War between Israel and its Arab neighbors? Neither Israel nor the Arabs even noticed their presence.

So that’s what Pakistan is. Sort of like Spiderman. You know, if Spiderman couldn’t run fast, couldn’t climb buildings nor had any other kind of superpower.

Fifty years ago, in 1969, a weak India led by Indira Gandhi had begged to join the OIC, the international organization of all nations in the Muslim world. This humiliating episode ended with India being refused entry at the insistence of Pakistan. In fact, King Faisal of Saudi Arabia, King Hussein of Jordan and the host King Hassan of Morocco jointly apologized to Pakistan for even considering having Indians around. In their apology to Pakistan, they blasted us Indians as crafty and conmen.

Now I am happy that India never joined the Organization of Islamic Conference (OIC). And I am ashamed that we were humiliated and sent out, called crafty and conmen. Everything about that episode was a disaster.

What a difference fifty years have made. Among many other things, Narendra Modi has ensured that the Muslim world siding with India over Pakistan has avenged that humiliation.

From Naxalism to ‘Disco Dancer’ to politics: How the death of his brother completely changed Mithun Chakraborty’s life

Mithun Chakraborty left Naxal movement after his brother's tragic death in a freak accidence and ended in the film industry.
News Reports

‘Your scooter has decided to fall in Nandigram’: PM Modi mocks Mamata Banerjee, turns the ‘helping friends’ jibe on its head

Shyama Prasad Mukherjee smiles from above: What BJP means by ‘Aashol Poriborton’ Narendra Modi makes it clear in Kolkata

Zhang Heqing, Chinese official in Pakistan, urged women to remove their hijab so he could see their eyes

Just hours back, veteran actor Mithun Chakravarty joined the BJP at the Brigade ground where PM Modi will address the rally.

As Mithun Chakravarty joins BJP, memes of his cult film ‘Gunda’ and others flood the internet

Indian Twitterspace and Mithun fans have gone wild sharing his cult dialogues and fight scenes as he joined the BJP ahead of PM Modi's Kolkata rally.

Matthias Boe, boyfriend of actress Taapsee Pannu, had appealed to Kiren Rijiju to 'do something' to help the actress.
Read more
News Reports

The Saamana editorial asked why only Taapsee Pannu and Anurag Kashyap were targeted and not other Bollywood celebrities.
Read more
Opinions

Mathias Boe had tweeted tagging Minister Kiren Rijiju, asking him to do 'something' about the IT raids on his girlfriend Taapsee Pannu
Read more
Interviews

Rabin Deb, one of the tallest leaders in West Bengal of the CPI (M) talks to OpIndia ahead of the 2021 elections, TMC and BJP
Read more
News Reports

All you need to know about Elon Musk’s Starlink, which has begun pre-booking in India

Currently, Elon Musk's SpaceX, of which Starlink is a venture, has already sent 1000 such satellites to the Earth's orbit. In the future, the company plans to expand the number to a network of 12,000 satellites.
Read more
- Advertisement -

From Naxalism to ‘Disco Dancer’ to politics: How the death of his brother completely changed Mithun Chakraborty’s life

‘Your scooter has decided to fall in Nandigram’: PM Modi mocks Mamata Banerjee, turns the ‘helping friends’ jibe on its head

Shyama Prasad Mukherjee smiles from above: What BJP means by ‘Aashol Poriborton’ Narendra Modi makes it clear in Kolkata

‘What is this if not a dream?’: Mithun Chakraborty says it is a dream come true after joining BJP

As Mithun Chakravarty joins BJP, memes of his cult film ‘Gunda’ and others flood the internet