CCTV footage shows that when the truck had entered the toll plaza, its number plate was clean and it was not yet blackened, grease was smeared on it after exiting the toll plaza 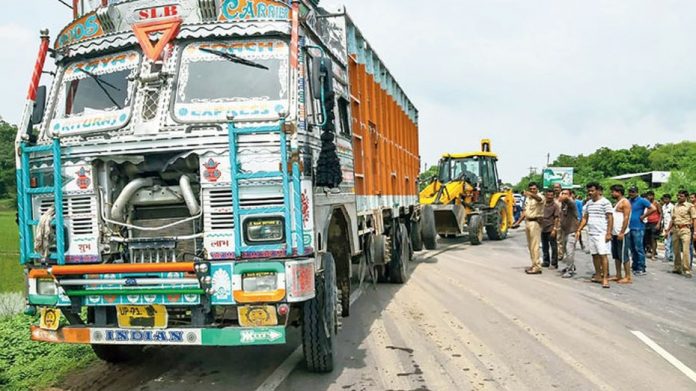 As the Unnao rape victim continues to struggle for life in hospital, the truck that was involved in the accident of her vehicle has come under scanner as one claim of the truck owner has been refuted. The overspeeding truck had hit the vehicle which had caused the death of two aunts of the victim, while the victim and her lawyer sustained grievous injuries. It was found that the number plate of the truck was blackened with grease.

Soon after the incident, the driver and the cleaner of the truck were arrested, and later truck owner Devender Kishore Pal was also taken into custody. Pal had said to the police that the number of the truck blackened because he wanted to evade the agents of his lenders as he had not paid the EMIs for the loan taken for the truck. He had said that the had missed a few instalments of his loan, and feared that the finance company will seize truck.

But the finance company has contradicted the version of Pal, saying that there was no question of seizing the truck as no EMI was pending on the loan. Talking to media, a manager of Orix finance company has revealed that Devender Pal was never threatened about payment of instalments. He said that Devender is an old customer of the Japan-based finance company who has been paying the instalments regularly. Although few instalments were skipped, they were paid later. He also added that the company has never seized any vehicle plying on the road, and therefore there must be other reason for blackening the number plate of Devender’s truck, the manager said.

It may be noted that the CCTV footage of the toll plaza at Lalganj in Rae Bareli also questions the version of the truck owner. The CCTV footage shows that when the truck had entered the toll plaza, its number plate was clean and it was not yet blackened, and the registration number was clearly visible. This means grease was smeared on the number plate after the truck had exited the toll plaza, if the number was hidden to avoid finance company agents, it should have been hidden all along.

On 28 July, when the victim of Unnao rape was travelling to Rae Bareli with her two aunts and her lawyer Mahendra Singh, their vehicle was hit by Devender Kishore Pal’s truck, which had killed the two aunts, while other two persons were seriously injured. BJP MLA from Unnao Kuldeep Singh Sengar is named as one of the accused in the case in the chargesheet filed by CBI. He is in jail since last after he was arrested by CBI. After the accident, a murder case was also filed against him, and Sengar was expelled by BJP from the party. The accident case also has been handed over to the CBI by the Supreme Court.