The Bill and Melinda Gates Foundation wants to recognize the work done in building toilets. And “civil society” is unhappy. Who are these people?

Everyone dies one day. It’s the ultimate statistic. The biggest truth. Do you know what is the second biggest truth? Everybody poops. Ten out of every ten people.

Here is Truth No. 3: In 2014, almost seventy years after independence, just 40% of people (actually less than 40% of people) in India had access to toilets.  It is 2019 and the number has now 96%. Even if you assume that government data might be overstated, the number would be at least 80%. So at the very least, toilet coverage would have doubled in five years.

Considering the size of India’s population, this may be one of the biggest advances in public health in human history. In 2018, the WHO estimated that 100% of toilet coverage would save the lives of 3 lakh children between 2014 and 2019. Children who might have died of diarrhoea. So, the number of precious young lives saved thus far by Swachch Bharat Mission would be in the lakhs. Think about that for a moment. Does it make you feel good inside?

But you know, this truth is making a certain class of privileged liberals feel quite constipated. And these liberals might not be doing anything else, but they sure are making headlines. When I typed the keywords into Google, a most excellent troika of liberal “news” organizations popped out.

The Bill and Melinda Gates Foundation wants to recognize the work done in building toilets. And “civil society” is unhappy. Who are these people? 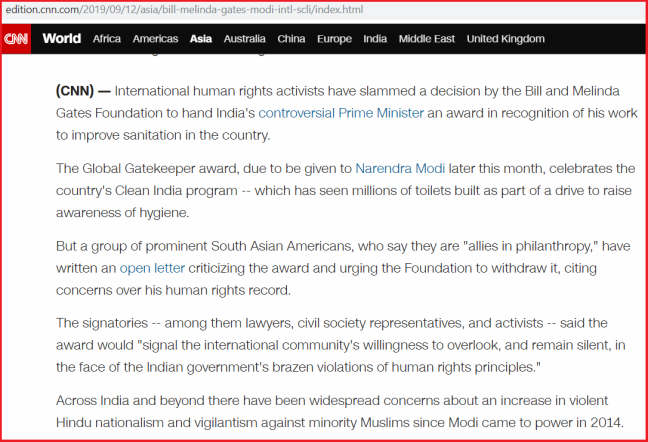 So what makes someone a “prominent” South Asian? Must be some kind of accomplishment. I am going to guess every one of these prominent South Asians must have regular access to toilets.

And the fact that they are up in arms against the award by Bill Gates Foundation shows just how little they care about real issues. And the lives of real people. Even if many of those are innocent babies. The “prominent” South Asians could not care less.

I actually took the time to read their open letter. Beyond the usual drivel, there is this part which is totally hilarious.

They might not care about the lives of children, but they certainly are behaving like five-year-olds who are upset about being denied candy.

Their campaign is another symptom of the now universal liberal epidemic: only the causes of Islamism matter and nothing else. Not truth, nor respect for human life, the rights of women, homosexuals, nothing.

But you know what these people never complain about? That generations of Indian Prime Ministers awarded themselves Bharat Ratnas despite failing to provide their people with something so basic as a toilet.

Have you seen a liberal saying that instead of awarding themselves Bharat Ratna, these Prime Ministers should have “awarded” the poor with toilets? Never. Because, after the Bharat Ratna Prime Ministers ate, they were always careful to leave behind a few scraps for the liberals to pick up. And that’s enough to keep “prominent” type people happy.