As with delaying the Koodankulam project, closing down Sterlite Copper or embarrassing us in front of the Chinese President, this propaganda has been doing immense short term damage to India. Of course, in the long term, this propaganda and its patrons have no future.

For some months now, there has been an ugly tradition created by trolls: whenever PM Modi goes somewhere south, especially Tamil Nadu, the social media trend “GoBackModi” takes off. This coincides with a day of crazy, pointless rage at the Prime Minister.

Obviously then, the aim of this #GoBackModi “protest” is not to express dissent, but to sow division between the people of Tamil Nadu (and Kerala) and the rest of the country. Once upon a time, this trick was tried on all Southern states. Similar things were tried by the extreme left in the North East and in West Bengal, the objective is to play up every possible fissure in Indian society. Bharat ke tukde, remember?

But then, BJP became the single largest party representing Southern states in the Lok Sabha. The party also became the sole voice of the North East and caught the fancy of everyone in Bengal.

Of course, one should never imply that one has to be with the BJP to be seen as a true nationalist. But the political pitch of the left was so formatted, with BJP accused of being a “North Indian” party of “upper” castes, that the left-wing narrative fell off the rails when BJP started winning elections all across India.

And now this left-wing narrative is constrained to just two states: Tamil Nadu and Kerala.

And as the left-wing narrative has lost its geographical reach, it has become only more shrill, more ugly and more disgraceful.

A line was definitely crossed today. Insulting India’s Prime Minister when he is visiting for a summit with the Chinese President. This should have been a day for Indians to present themselves as united and speaking in one voice. But alas.

The separatist undertones of this “protest” are quite obvious and so is the fact that it is underwritten by the “soul harvesters.” You know them, the ones who are most concerned about the environment. So concerned that they welcomed a Rs 20,000 crore loss to the Indian economy.

A Rs 20,000 crore loss to the economy along with a loss of thousands of jobs. Now, who gains if an industrialized state like Tamil Nadu is forced into poverty? Who is waiting in the wings to put the newly poor on a drip of “aid” from overseas donors? Easy to answer.

One more thing should be pointed out: at the moment, the Congress Party, which has no future stakes in India, maybe happy to go with anyone who is against BJP. But it must be remembered that the vested interests who are arrayed against PM Modi today were just as hateful towards the Congress when they used to run the country. Remember how these same vested interests fought against a nuclear plant of national significance at Koodankulam? In so far as these vested interests are concerned, it is India which is on target, not necessarily BJP or Congress.

So it’s not about dissent at all. It is about making India look bad. The whole of India and every Indian: from Kashmir to Kanyakumari.

Read: Chinese President Xi Jinping to arrive in India for the informal summit: Here is the significance of summit being held at Mamallapuram

Right now, the poisoned rhetoric being pumped into Tamil Nadu by enemies of India ranges from the ugly to the outright absurd. Have you heard of “Lemuria”? There are enemies of India telling Tamils that they began as a distinct race from a lost continent called Lemuria! Of course, plate tectonics and modern earth science have shown no evidence that any such thing ever existed, but it doesn’t matter. In any case, when you are telling Tamil Nadu that BJP is responsible for any problems in the state, why would you care about science? You have chosen to be willfully irrational anyway.

As with delaying the Koodankulam project, closing down Sterlite Copper or embarrassing us in front of the Chinese President, this propaganda has been doing immense short term damage to India. Of course, in the long term, this propaganda and its patrons have no future. And they probably know it too. This photo should be seen by everyone who wants to create a divide between North and South in India. 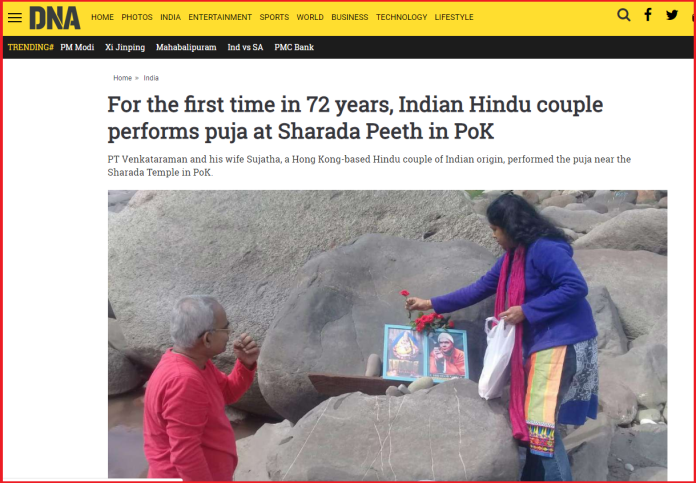 That’s Mr P T Venkatraman and his wife Sujatha who have travelled to Pakistan occupied Kashmir to offer puja at Sharada Peeth. They are the first Hindus in 72 years to do so. Take that.

Hindu activists have alleged that a minor Hindu girl was converted and being married off to a 40-year-old Mohammed Intezar Hussain.
Politics

‘Biggest crime is I am Muslim’: TMC MLA breaks down into tears after being denied ticket, calls party the ‘B Team’ of BJP

Sitting Trinamool Congress MLA from Nalhati, Moinuddin Shams, has announced in tears that he has quit the party.

This time it’s personal: Suvendu Adhikari vs Mamata Banerjee in Nandigram is officially on, the most high profile contest this election season

The BJP has announced that Suvendu Adhikari will be the party candidate versus Mamata Banerjee from Nandigram.

Rabin Deb, one of the tallest leaders in West Bengal of the CPI (M) talks to OpIndia ahead of the 2021 elections, TMC and BJP

Two days before Mansukh Hiren had gone missing, he had sent a letter to Maharashtra CM, HM, and the police alleging mental harassment

Matthias Boe, boyfriend of actress Taapsee Pannu, had appealed to Kiren Rijiju to 'do something' to help the actress.
Read more
News Reports

The Saamana editorial asked why only Taapsee Pannu and Anurag Kashyap were targeted and not other Bollywood celebrities.
Read more
Opinions

Vimla, the wife of one Mansukh Hiren has said that her husband had left the house saying he was going to meet crime branch officer Tawde
Read more
News Reports

All you need to know about Elon Musk’s Starlink, which has begun pre-booking in India

Currently, Elon Musk's SpaceX, of which Starlink is a venture, has already sent 1000 such satellites to the Earth's orbit. In the future, the company plans to expand the number to a network of 12,000 satellites.
Read more
- Advertisement -

India should increase cooperation with Armenia in response to Turkey’s dalliance with Pakistan, experts argue

Over 10 crore people donated over Rs 2500 crore in 45 days in the world’s biggest crowdfunding campaign for Ram Mandir: VHP

13-year-old Ludhiana girl abducted by one Babar with the help of his mother rescued from Surat, was subjected to sexual exploitation

‘Biggest crime is I am Muslim’: TMC MLA breaks down into tears after being denied ticket, calls party the ‘B Team’ of BJP

This time it’s personal: Suvendu Adhikari vs Mamata Banerjee in Nandigram is officially on, the most high profile contest this election season

Islamists in Pakistan try to lynch a man alleging blasphemy, man says he had only questioned maulana for not solving problem after taking money

Almost 100% of China’s public spaces under watch: Here is how China turned neighbours into agents of the Chinese Communist Party