UP CM Yogi Adityanath's biographer Shantanu Gupta shares excerpts of his book 'The Monk Who Became Chief Minister' to share what Yogi's parents thought of their son. Yogi Adityanath's father passed away yesterday after prolonged illness.

Talking to me Shri Anand Singh Bisht told that Ajay was always polite and courteous and was an avid newspaper reader right from a very young age. Shri Bisht said that although he was constantly on tours and often away from home, he made it a point to check on his children and gave surprise visits to ensure their diligence and attention to studies. He said that maybe owing to all this today, the Ajay of a small village named Panchur has become Yogi Adityanath, 21st Chief Minister of Uttar Pradesh. It’s interesting to note that, after becoming the Chief Minister of Uttar Pradesh, Yogi and his Ministers have conducted a series of ‘surprise checks’ of delivery of different government services. Shri Bisht was a proud father who felt that managing a state like UP, is not everybody’s cup of tea and only Yogi can control it because since his childhood he has developed a good ability to make decisions. Shri Bisht also told me that Yogi’s work as a Member of Parliament was always for the people and free from any type of corruption and that’s why people love him. He further added that People have started flocking for his sifarish (recommendations) to his son, after he becoming the Chief Minister of UP. He added that he keeps such people at bay by graciously accepting their congratulations and asking them to join him for tea while politely telling them that no recommendations will be entertained.

Yogi Adityanath’s mother Savitri Devi ji also told me that Ajay was good student and never kept bad company. She said that he was a simple boy and they never realized that he would grow to this stature. She fondly remembered how close he was to her as his father was usually posted at different locations and he was also strict, so all the children were a little scared of him. Regarding their personal habits, Savitri Devi ji said that everyone in their house always woke up early. Even at the age of around 80, (in 2017) she used to wake up at 4 am to finish her chores and then goes to the fields to oversee the small agriculture farms that they have. (In 2017) At 85, Ajay’s father also used to get up at 4 am every day and cleans the whole house and the surrounding compound. Savitri Devi ji said that right from his childhood, Ajay was fond of cows. The Bisht family had cows at home and taking them out to graze was part of Ajay’s routine after school. Pointing to the trees around their house in Panchur, Savitri Devi ji told me that Ajay had planted many of these, when he was a boy.

Later in the conversation, Shri Bisht said that as a forest ranger, he has worn a Khakhi dress all his life. His uniform had three stars on the shoulders, which looked like a police uniform, and moreover, his uniform also had a UPF (Uttar Pradesh Forest) badge, which was quite similar to UPP (Uttar Pradesh Police) badge and this sometimes scared Ajay’s friends as they mistook him for a policeman. He laughed and added that now after Ajay has become CM, he has, with him, a full time Khakhi dressed gunman, a real policeman, as part of the security protocol.

After doing his graduation in Kotdwar, Ajay enrolled for Master of Science (MSc) in Mathematics in 1992 from Pandit Lalit Mohan Sharma Government PG College, Rishikesh. While he was in MSc first year, he started visiting Gorakhpur and meeting Mahant Avaidyanath. After a couple of meetings Ajay was convinced about joining Mahant Avaidyanath at the Gorakhnath Mutt as a full time disciple. In November 1993, Ajay left his village, his parents, his friends, and his studies and without disclosing much to anyone in the family, he went to Gorakhpur. On 15th of February 1994, Ajay was anointed as a Nath Panth yogi by his guru Mahant Avaidyanath.

It was only after couple of months that Ajay’s parents found out from the newspaper about his sanyas. Until then his parents thought that he had gone to Gorakhpur for some employment opportunity. After finding out, Ajay’s parents reached Gorakhpur on the next available train and at the Mutt, Anand Singh Bisht, was shocked to see Ajay in a sanyasi’s attire. Mahant Avaidyanath was out of station that time and Ajay had to calm his parents and made them talk to his guru on phone. Mahant Avaidyanath told Ajay’s father that his son Ajay is Yogi Adityanath now. Mahant Avaidyanath further requested Anand Singh Bisht that of his four sons, one had decided to come with him for nation building and for strengthening Hinduism; and asked him to please allow him to serve the country. After initial resistance his parents gave in.

After couple of months Yogi Adityanath, came back to Panchur village, in Uttarakhand to take Biksha (alms) from his mother, as a part of the Sanyasi tradition. Since then Ajay’s parents have visited Yogi Adityanath in Gorakhnath Mutt couple of times. Now they call him “Maharaj ji’, as others do, respecting the protocol and dignity of his role. Yogi Adityanath has visited his hometown in Uttarakhand only for a few very important functions in the family. Yogi Adityanath has established a college, Mahayogi Guru Gorkhnath College, near his village in Uttarkhand, under the Gorakhpur Mutt’s administration.

An honest Chief Minister son, is my life’s biggest earning

Concluding the discussion with Ajay’s parents I mentioned that hills of Uttarakhand have given Govind Ballabh Pant, Hemvati Nandan Bahuguna and Narayan Dutt Tiwari as Chief Ministers of Uttar Pradesh and now this house has given Yogi Adityanath as the fourth CM for Uttar Pradesh, hailing from the hills. To this, Savita Devi ji proudly recalled that Ajay always wanted to serve the people and now he is doing exactly that. With wet but contended eyes, Anand ji added that he has not earned much in life. What he has earned is an honest Chief Minister son. He added that their lives are blessed as Ajay’s parents and today they are proud of the monk who has become the Chief Minister of such a big state. 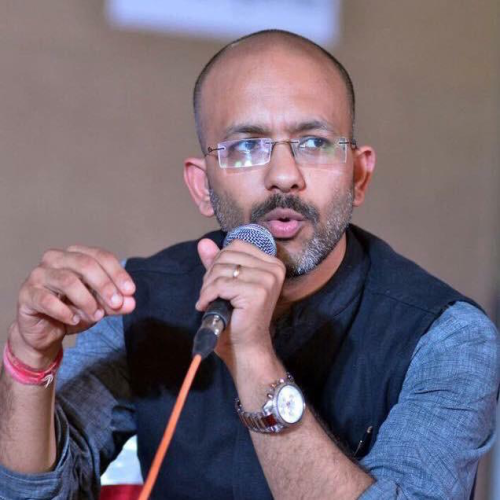