In Prime Minister Narendra Modi’s keenly anticipated address to the nation on New Year’s Eve, perhaps the biggest surprise to viewers was this: There was no “Mitron”. Jokes apart, this time there were no big surprises, no major shocks and perhaps for good reason, since people are by and large afraid of drastic changes one after the other.

We also did not get any statistics, any data, any figures about the impact of demonetisation. Perhaps those who expected such content from the Prime Minister are to be blamed, since Modi knows his audience well. His audience is entire Bharat, and not just India, and he knows they care two hoots about astronomical figures. India, may have to wait for the RBI or the Finance Ministry to satiate their demand. Bharat, has already got its due.

Some of the sops granted by Modi are as follows:

– The number of houses being built for the poor, under the Pradhan Mantri Awaas Yojana in rural areas, is being increased by 33 per cent. Loans of up to 2 lakh rupees taken in 2017, for new housing, or extension of housing in rural areas, will receive an interest rebate of 3 per cent.

– Banks have been asked to raise cash credit limit to small business to 25 per cent from 20 per cent.

– Credit guarantee for small traders to be raised to Rs 2 crore from existing limit of Rs 1 crore.

– All pregnant women will get Rs 6,000 in their bank accounts in an attempt to reduce child and woman mortality.

– Government to pay interest for 60 days on loans taken by farmers for Rabi season from district cooperative banks and societies.

– Higher interests for deposits made by senior citizens

– In the next 3 months, 3 crore Kisan credit cards will be converted to RuPay cards which will enable them to buy/sell directly through the card and there will be no need to rush to banks.

While some of the above measures are brand new, some like the scheme for pregnant women, is merely implementation of a promise given during the UPA era, showing us that India is at such a stage, where even just implementing old dormant decisions can impact many people.

As far as the common themes are concerned, firstly, Modi has identified his targets with surgical precision: the poor and lower middle class across urban and rural India, farmers, medium and small-scale traders, senior citizens and women. The section which he has deliberately ignored is the relatively lower in number, but more vocal salaried class. The reason for this selection could be the fact that demonetisation would have inconvenienced the first lot much more than the educated, tech-savvy, well-off salaried class. Naturally, Modi chose to rub a balm of relief on the most affected class.

Secondly, one cannot ignore the fact that the largest election in the country (after the general elections): The Uttar Pradesh election, is just a few months away. The target group would probably cover up more than 95% of the residents of Uttar Pradesh so this goodies-bag has to be seen as the bugle for the election campaign.

Thirdly, most of the sops like the multiple interest subventions, the raise in cash credit limits and the credit guarantee schemes are all loan related i.e. to avail the benefits, you have to opt for a loan. This is crucial because demonetisation has made banks flush with funds. Banks have to pay interest to the depositors, and if they do not loan out these funds, then banks will not earn any money. Thus, all the measures related to loans serve a dual purpose: Not only does the borrower get relief, the lending banks are also helped in mobilising idle funds. This movement of funds can generate significant economic growth in rural India.

Fourth, although these are sops, these are very different from the UPA era sops. Modi’s sops are targetted to the small income group: There is a cap on the housing loan taken and the deposits made by senior citizens, ensuring that only the truly deserving get the most benefit. Also, unlike earlier farm loan waivers, these are only interest rebates, which means you still have to take a loan and repay it, thus these sops are only for the doers and not for the slackers. There is a certain action demanded on your part to enjoy the benefits, and it is not a dole for doing nothing.

Understandably, these schemes have caused severe heartburn in the hearts of life-long Modi haters. Rajdeep Sardesai and Sagarika Ghose displayed their sheer insensitivity at the high Infant Mortality Rates and Maternity Mortality Rates in rural India. 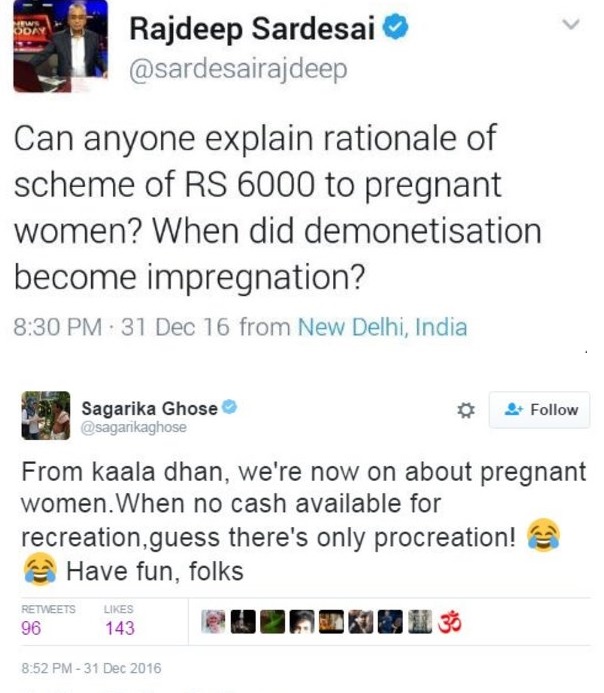 Modi’s Gujarat Model was often targeted by these very people for being low on the human development indices, but when he tries to address this issue nation wide, the measures are ridiculed with an elitist, classist, mindset unseen in the vilest of trolls. Rajdeep later deleted his tweet.

With this slew of announcements, Modi may have deflated the expectations from the upcoming Union Budget, but while people have got the sops, they will be awaiting the big crackdown on crooks. It has already begun, but people will want more. More penal measures, more surgical strikes on black money hoarders are expected. Also one would expect that soon the Government will clean up the mess that is funding of political parties. Perhaps such measures were omitted from the speech because the address was primarily to soothe the nerves of those affected by demonetisation. For the punitive measures, we may have to wait a bit longer.