More
Home Opinions Forget 'Advantage BJP' articles, let's see what media was doing all the while in...
Opinions
Updated: 5 March, 2017

Forget ‘Advantage BJP’ articles, let’s see what media was doing all the while in Uttar Pradesh 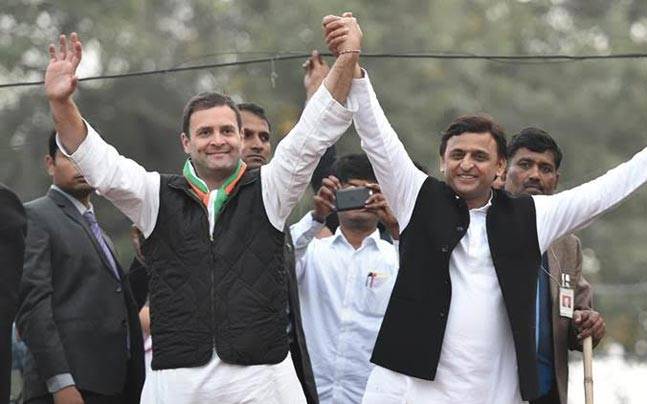 Just a few days are remaining before we get to know who wins Uttar Pradesh. Of late, some in media have suddenly started claiming that it’s advantage BJP and that people are still behind Prime Minister Narendra Modi, but let’s rewind a little.

In run up to the elections and till a couple of weeks back, the mainstream media, particularly the India Today Group and the Economic Times, were leaving no stone unturned in trying to build a ‘hawa’ in favour of the SP-Congress alliance, even if it means exposing obvious double standards in reporting and interviews. Perhaps they realised that they had gone too far in cheerleading, so the recent noises about Advantage BJP is being thrown around when just one phase of polling is remaining.

In many parts of the world, the media doesn’t try to hide its political or ideological stance, and therefore covert support for certain participants is assumed and understood. In many countries, the practice of the fourth estate officially endorsing a particular candidate or party is also common and acceptable. In India, however, the media insists on being called “independent” and “neutral”, yet their favouritism and malice are obvious and evident, especially during election coverage.

This undesirable and dangerous trend is a direct consequence of the nature of mandates the electorate has delivered in the recent past. In an era of hung assemblies, many in the media fancied themselves as quasi-political operatives, agents and even kingmakers. This gave them relevance, access and power in a post-poll scenario.

With most verdicts now being conclusive, that role is now gone. The shift to being an extension of the campaign during the election process has thus become inevitable. Especially for those who depend on political patronage for survival, or seek to extract a price for their circulation and viewership.

Two videos – Rahul Gandhi’s poll rally in his family pocket borough of Rae Bareli on 17th February, and Rahul Kanwal’s interview of Amit Shah around the same time – provide evidence of just how blatant this practice is, and how it works.

These look disconnected and insignificant when seen in isolation, but the pattern they build is unmistakable.

When the Gandhi siblings attack Modi for lack of development and employment in Rae Bareli, the irony cannot be more difficult to miss, except for the media. Their Italian mother, and both grandparents have been MPs from this constituency for the longest time. The reference to Italy is necessary in light of Priyanka Vadra’s astute observations regarding the Prime Minister’s domicile.

The audacity is admirable – blaming Modi for no development in a geography that has sent a Congress member to Lok Sabha in for 64 of the 70 years since independence. The local MP has not even bothered to campaign for the alliance. And yet, there isn’t a single piece on this. But there are quite a few journos who find merit in the ‘bahari’ attack against Modi.

Respect, authoritarianism and the mai-baap mindset

Rahul Gandhi has gone to town accusing the Modi of disrespecting his predecessor, of peeping into people’s bathrooms, and not taking anyone else seriously. By implication, one assumes that Rahul Gandhi displays all these qualities.

Yet, scan the coverage and there is not a squeak about this. Did you see anyone talking about it?

The Congress VP had also remarked that PM Modi lacks seriousness, is tired and therefore should not worry about UP, and leave it to Akhilesh. He went on to draw a comparison between how the PM was supposed to be Raj of DDLJ, but turned out to be Gabbar of Sholay (whatever that means). This was followed by a jibe on foreign travel to meet Obama, while belittling Swacch Bharat mission. Of all Indian politicians, Rahul Gandhi should be the last one to question Modi on commitment and energy. The media ecosystem knows this and also that the PM has not taken a single day off and maintains a punishing schedule every day.

But they won’t say it, and instead, will watch Rahul Gandhi mocks the cleanliness project, necessitated because his family left a mess during their 60-year rule. No one has bothered to ask Rahul Gandhi (who by default represents the incumbent government), why he does not mention a single achievement of the previous five years, or of ten years of UPA rule.

Why has Rahul Gandhi not been subjected to the kind of grilling Amit Shah and Yogi Adityanath face on channels? The batting from the Gathbandhan is being done by Akhilesh, who, admittedly has to deal with tough questions such as ‘where do you go on vacation’, ‘do you get time to rest’ and ‘do you fight with your wife, because I often do?’

The Delhi Chief Minister, who has been seen everywhere except Delhi, found time during his recuperation in a wellness resort (it is an offshore Mohalla Clinic, so no hypocrisy arguments please!) to troll the Prime Minister. When there was nothing substantial he had to put out, he simply transformed himself into a body language expert and concluded that Modiji was looking nervous and tired. The AAPs media network was prompt to latch on to the ‘Kejriwal trolls Modi’ line. Of course, it helps immensely to have a chief minister who prides himself being in called a troll, but that’s another story.

Now, see what Rahul Kanwal does (5.40 – 6.44 in this video). He needles Amit Shah by asking about the leaked audio clip and asks about visibly defeatist body language. Of course Shah swiftly knocks him back into place by reminding that you can’t ‘see’ an audio clip. The rest of Kanwal’s interview is a fun watch, because Shah makes him answer his own questions, but the operating model becomes clear.

And talking of body language and seriousness, just look at the following video, especially the first 30-40 seconds:

A political rally is not a ‘fun’ event, especially in poverty stricken areas like Rae Bareli. But the Gandhi siblings seem to be merrily oblivious of this (10.35 -11.50 in the rally video), as they engage in private chatter and animated exchanges with a certain lady in green, who was the only other person in the front row.

A little nosing around revealed that the lady is Aditi Singh, the candidate for the Rae Bareli assembly seat. Aditi is the daughter of a feared local don and a very close associate of Priyanka Gandhi, which explains why she received the privilege of sitting along with the Gandhi siblings. There were five other candidates on stage, and they were made to stand behind, and appear only when asked.

This begs the question, if the Gandhis only allow personal friends and khandaani candidates to sit beside them even in election rallies. Aditi looks like a fine young woman, and the conversation looks to be fairly informal. To any reporters worth their salt, the optics of a high-society, blink-and-miss rendezvous on the Rae Bareli Congress stage, should be a 1500-word copy on just why the Congress is India’s most feudal party. But that’s not what they are here for, are they?

The entry of Priyanka Gandhi into the UP campaign was billed as the big push from the Gathbandhan for floating votes. She made two appearances and a brief speech in her backyard before news spread that subsequent rallies featuring her had been cancelled. But even before the first day of her appearances was over, there was a hurried hurried sprint among leading independent journalists to sing peans to Priyanka Gandhi. MSM stole the show, when ‘they killed’ logic and reason to quickly announce Priyanka Gandhi as a feminist icon that India has been waiting for.

In the only speech she made, Priyanka was sermonising on how women need to have their independent identity away from the ‘mata-behen’ references of the PM. Yet, she thought nothing of smiling through an attack (7.45 – 8.08 in this video) on PM’s nonagenarian mother, for her grave crime of standing in queue like a normal citizen to exchange her old notes. In allowing her to stand in line, Modi had proved that he was a terrible son, and therefore unfit for the state of UP, thundered the invisible speaker, because the camera lens was solely meant to cover the Gandhis, even if they were merely just sitting on stage, chatting among themselves. Unlikely that you would have heard anything about all of this, because not one tweet or question about Priyanka Vadra’s conduct has been raised.

These are just a few of the hundreds of examples that come to mind and are regularly exposed on social media.

It is perhaps a good thing that TV Channels and Newspapers have lost much of their credibility already and therefore, voters are less gullible than assumed. Having said that, it is perhaps time for the Election Commission to broaden the ambit of paid news, and implement guidelines that can act as a deterrent to the obvious bias.