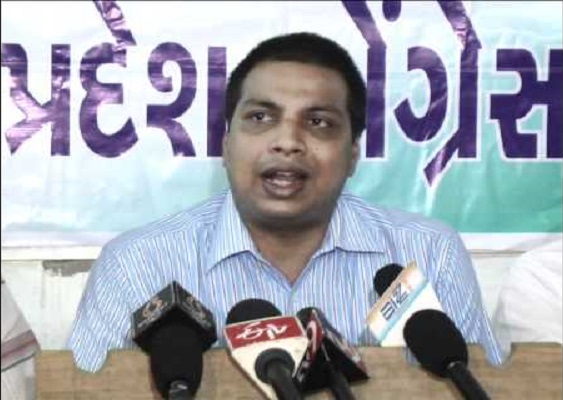 In the ongoing Assembly elections in Gujarat, the Congress party seems to be trying desperate measures to stay relevant in politics. Yesterday, Gujarat Congress IT cell head Rohan Gupta had posted a fake ‘survey’ predicting poll results, which showed Congress set to sweep the assembly elections. The BJP, which has been in power for 22 years in Gujarat, wasn’t too amused by it.

Parindu Bhagat, in-charge of Gujarat election legal cell, on behalf of BJP leaders has filed an application that at at 2:25 PM on Sunday, Congress IT Cell chairman Rohit Gupta, from his Twitter handle @rohanrgupta, tweeted an exit poll for the ongoing Gujarat Assembly Elections. This ‘exit poll’ showed Congress getting 65+ seats out of a total 89 constituencies, in the first phase of Gujarat election. BJP was pegged to get 22 seats while others were pitted to get 2 seats.

The IT cell head Rohan Gupta is the son of Congress leader Rajkumar Gupta.

BJP’s application further claims that the exit poll picture had a watermark of one Chanakya India (chanakyaindia.in). It then claimed that the survey was a fake and has been done with an intention to influence the second phase of polling (which is to be held on 14th December).

This as a result violates the Election Commission’s notification which bans publishing of exit polls till 5 pm on 14th December, after the second phase of voting concludes. The BJP thus requested necessary legal action for the same.

Meanwhile, Congress in its defence has claimed that this ‘exit poll’ was based on an online survey based on a website called chanakyaindia.in.

Interestingly it turns out that the domain chanakyaindia.in is owned by the company named Comet Green Energy, which also owns gujaratcongress.in:

To complete the triangle, this company, Comet Green Energy, is owned by Rohan Gupta, who supposedly spread the survey in the first place.

This Comet green Energy is owned / operated by same @rohanrgupta . This can be seen from data of unisafe.in

Now you know from where @rohanrgupta pulled out so many seats for Con in that tweet.#ConFakePollExposed pic.twitter.com/WP073a71G3

As a result of all this cyber merry-go-round an offence has been registered against Gupta in Ahmedabad Crime Branch’s cyber cell.

Also, Unisafe.in, the other website registered with the email id cometgreenenergy@gmail.com, is that of a “direct broker” company named “Unisafe Insurance Brokers Private Limited”. One of the directors of this company is Rohan Rajkumar Gupta, who is also a Director in other companies like Comet Communications Private Limited, Comet Global Private Limited and Comet Performance Chemicals Private Limited.