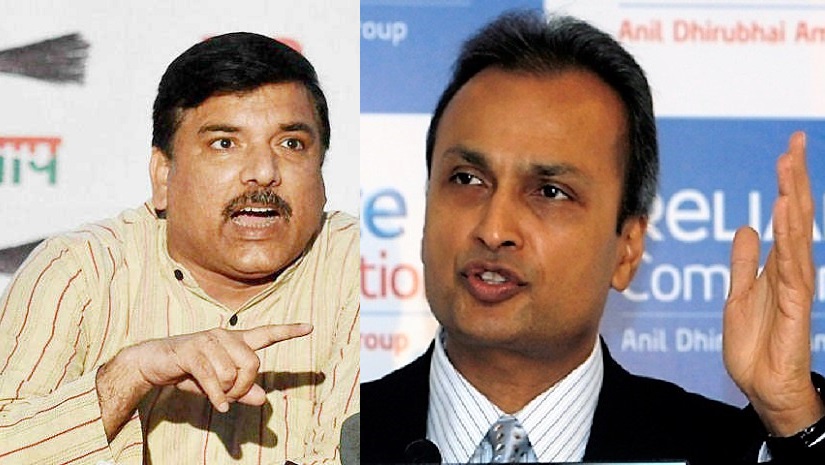 The Anil Ambani led Reliance Group of Companies has slapped a Rs. 5,000 Crore defamation suit against Aam Aadmi Party’s Rajya Sabha MP Sanjay Singh. According to reports, the Reliance Group has alleged that Sanjay Singh has made ‘false, distorted and malicious insinuations’ against the company.

The notice sent by the company to Sanjay Singh refers to the press briefing held by Sanjay Singh on February 13th where he had raised his suspicions about the purchase of 36 Rafael jets from France in a government to government deal.

The legal notice also asserts that the press briefing was a motivated campaign at the instance of corporate rivals of the Reliance Group to deliberately besmirch them and prejudicially affect their commercial interests.

The legal notice addressed to Sanjay Singh says that Singh, as a custodian of public interests should have only spoken based on irrefutable evidence. It further adds that he seems to be under the mistaken impression that freedom of expression gives him the license to behave irresponsibly and make false, misleading and distorted statements to suit his political interests.

The notice has quoted Singh as saying that a contract worth Rs. 22,000 crores have been awarded to the Anil Ambani led Reliance Defence to manufacture parts of the jets while the company lacks even one year of experience in the field and that proves that the Rafael deal is a deal of scam. It says that Sanjay Singh has deliberately ignored the fact that Reliance Defence and its associated companies have 35 industrial licences to manufacture defence products.

The reliance Group owns India’s largest shipyard in the private sector in Gujrat which is the second largest dry dock in the world with assets worth thousands of crores. The notice also said that the company has always won its contracts through the competitive process and it also holds the contract by Indian Navy to manufacture 5 warships which were awarded in 2011.

The notice has demanded an unconditional apology and retraction of the press briefing by Sanjay Singh.

The AAP centric blog Janta ka Reporter and its Editor have quoted Sanjay Singh as saying that any Ambani or Adani cannot silence his voice.

AAP leader Ashutosh has also reacted to the news:

Please enlighten me if Anil Ambani is joking !! Defamation suit of 5000 Cr !! How much Sanjay earns !!! Anil should find out !!!

The Reliance Anil Ambani Group had earlier filed a defamation suit against Congress spokesperson Abhishek Singhvi in the Gujrat High Court for making statements about the company getting favourable loan waivers from the current BJP government.

The AAP leader had also said in the press briefing that the Rafel deal will prove to be the last nail in the coffin of the BJP led NDA government and that the government has agreed to pay ‘astronomical price’ for the Jets.

It seems AAP leaders have developed a penchant for making defamatory comments and then getting sued for it. Party supremo Arvind Kejriwal had at least 11 defamation cases against him and earlier today, we reported how the second lawyer in a row had abandoned the case where BJP leader Arun Jaitley sued him.