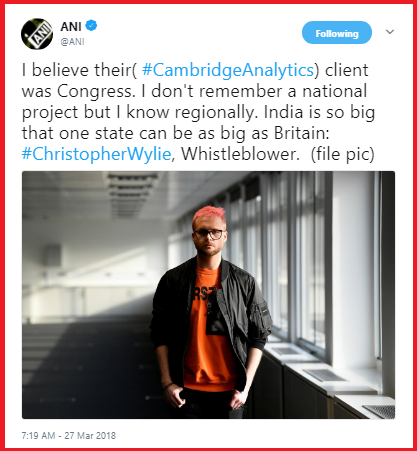 And with these words, the entire Indian liberal campaign of lies, rumours, insinuations and propaganda should have come crashing down. One truth to beat them all.

How many times over the last four years do you remember some smug liberal, some academic water carrier of Sonia Gandhi, accusing “Bhakts” of believing in “Whatsapp History?” Journalists, intellectuals, academics, all of them united in opposing the scourge of “fake news,” which they say is the mainstay of the BJP regime.

If only people knew the “truth,” they say, the ruling BJP would have no place to hide. So, a string of news websites mushrooms across the internet, all of them speaking in exactly the same voice, spewing the exact same talking points. Every slimy character out there suddenly has the money and resources to start a “fact-checking website” that is heavily promoted both by traditional publications and the new left-wing digital media.

One serial fraudster, who has been in and out of jail for blackmailing people with fake videos, made a fake RTI. Got arrested and went to jail…again. When he came out on bail, this career criminal sat down for an interview with one of these websites, where he was introduced as a “senior journalist.” So what about the forgery? They put a spin on it saying he might have been trying to protect a source…

So what else was the new left-wing digital media engaged in? Digging out small-time BJP functionaries who may have gotten this or that photograph wrong. Ah, there … there goes the secretary of the IT cell of the XYZ morcha of some BJP district committee in Haryana. He/she has shared this pic about violence in Bengal which happens to be wrong. Let’s ignore the riot in Bengal and expose him/her.

Meanwhile, their side is possibly engaged with Cambridge Analytica, using social media to steal people’s private information so that they can be targeted with carefully tailored doses of fake news.

While liberals on Twitter rail about smalltime trolls doing propaganda, their side is likely using big money to manufacture big fake news. For every citizen, a personal profile to be created by stealing data from their social media presence. Then, everyone is to be matched with a customized packet of fake news to influence their voting behaviour.

And all this time, they were telling us that Aadhar is way too much. When you tell them that people are already sharing every minute detail about their personal lives on social media, they have the technical excuse ready. They say Aadhar is compulsory, whereas social media participation is voluntary. When you point out that this is a distinction in principle with no difference to the outcome, they don’t care.

Your privacy is dead anyway once you get on Facebook. This privately owned foreign company already has a minute by minute record of your life.  You might as well give the Government of India your name, date of birth and fingerprints.

No, they insist. Never.

So what do they have to say now? Turns out that this data was actually being stolen without our knowledge. Possibly to serve the electoral interests of a lazy crown prince.

The writing was already on the wall the day the Cambridge Analytica story broke across the world but liberals in India were quiet as scared children. If they had even the slightest excuse to link Narendra Modi to Cambridge Analytica, they would have pounced upon him instantly.

But they had a fairly clear idea of who Cambridge Analytica was working for and so they were silent. The whole “Destroy Aadhar” crowd didn’t give a damn about the loss of privacy as long as it served the anti-BJP agenda. The only reason they were against Aadhar is that Modi had made it a cornerstone of its policy. Plus, a class that had feasted for 60 years on the corruption had an instinctive problem with an anti-corruption measure.

So days passed and no one in the Indian media and/or intelligentsia had anything to say about Cambridge Analytica. Perhaps another case of “tyranny of distance.” Until the BJP’s Ravi Shankar Prasad decided to hold a press conference and demand answers. When the Congress deleted its app the other day, it was fairly clear that they knew the game was up.

Let me make this clear: every single pronouncement from every liberal is now in doubt. Remember the coordinated “Has Rahul come of age?” Campaigns? Remember the delirious liberals cheering on caste agitations in every corner of the country or sharing pictures of footwear supposedly worn by farmers? Every single one of those posts is now under a cloud. How many of them were acting on orders of Cambridge Analytica?

This morning, in a corner of Youtube, I saw a video posted by one sour-faced ex-TV anchor who saw his best days back when the Dynasty and Doordarshan were ruling the country. Now he works for one of these sinister left-wing propaganda sites I was talking about. He was spewing bile against the “Namo app,” hoping to scare people.

Ha! Too late uncle, too late. Cambridge Analytica has already spilt the beans. Your lies are past their sell-by date. Find something else to do. Kyunki, gali gali mein shor hai, tumhara malik data…