The National Commission for Protection of Child Rights (NCPCR) has issued a show-cause notice to the Chief Medical And Health Officer of Kota District, BS Tanwar, into the death of 77 infants in the JK Lon Hospital in Kota, Rajasthan in a month.

NCPCR: Commission requires you (BS Tanwar, CMO)to appear in person on Jan 3 to explain reasons for not sharing the action taken report with Commission. If you fail to comply with the order without lawful excuse, you will be subjected to the consequences of the non-attendance. 2/2 https://t.co/gl347s7InY

Taking suo moto cognisance of a report about the deaths published in The Hindu on 28.12.2019, which stated that Kota was rocked with deaths of 12 infants last week in the government hospital, the Commission directed Tanwar to appear in person on January 3 to explain reasons for not sharing the report on action taken with the Commission. 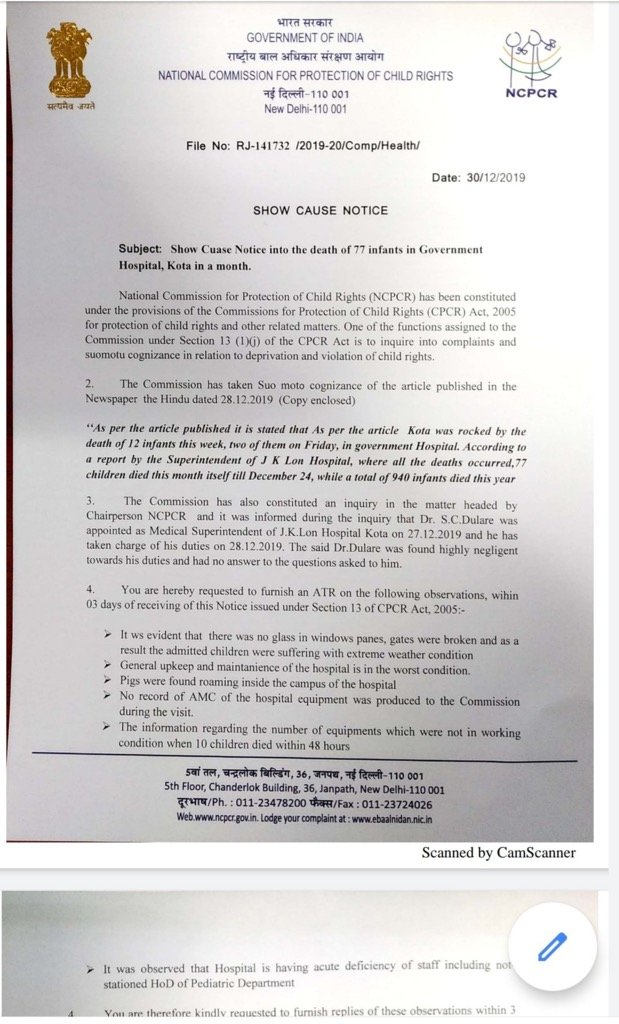 The notice further stated that If Tanwar failed to abide by the order without lawful excuse, he will be subjected to the consequences of the non-attendance.

Making scathing observations, the Commission also sought an ATR within 3 days of receiving the notice issued under Section 13 of the CPCR Act, 2005.  The observations made by the NCPCR are as follows:

The notice was issued by the commission after a team of NCPCR headed by Chairman Priyank Kanoongo visited the hospital on Sunday.

Despite the serious nature of the issue which concerns infant death, the hospital gave a clean chit to itself by forming a committee to investigate the deaths, which has now ruled out any negligence saying resources and equipment were functioning properly.