OpIndia
Home News Reports Viral video: Maulvi threatens Amit Shah, says ‘even those Muslims who have not had Khatna yet are not afraid of Modi govt’
CrimeNews Reports

Viral video: Maulvi threatens Amit Shah, says ‘even those Muslims who have not had Khatna yet are not afraid of Modi govt’

"That 'Aate ka Thaila' (Sack of Wheat) Amit Shah said that Muslims do not have to fear in this country. You (Amit Shah) should know that even those Muslims who have not had 'Khatna' (circumcision) yet are not afraid of you", the Maulvi was seen saying. 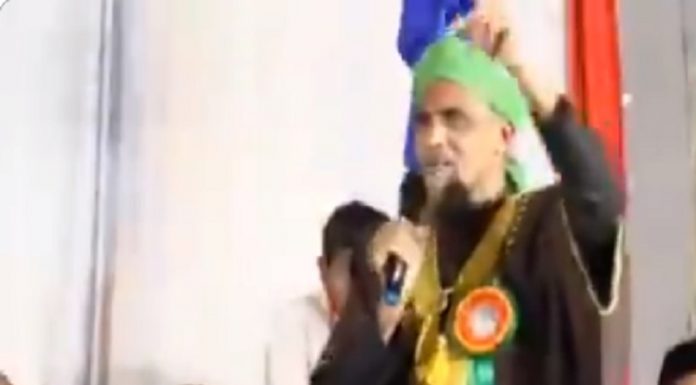 In an undated video which has gone viral on social media now, an Islamist Maulavi threatens Prime Minister Modi and Home Minister Amit Shah by claiming that even those Muslims who have not yet had ‘Khatna’ (circumcision) do not fear the Modi government.

Listen to these so called dare huye musalman pic.twitter.com/A66yzZBRdW

“We respect Baba Ambedkar. We are here to protect to Constitution written by Baba Saheb Ambedkar. That ‘Aate ka Thaila’ (Sack of Wheat) Amit Shah said that Muslims do not have to fear. You (Amit Shah) should know that even those Muslims who have not had ‘Khatna’ (circumcision) yet are not afraid of you. Muslim children who do not how to pass their urine yet are not afraid of you. Muslims do not fear for you,” says rabid hate-monger Maulavi.

The Maulavi was responding to the assurances given by the Home Minister Amit Shah on the floor of parliament during the passage of Citizenship Amendment Act on December 11, stating that Muslims of the country need to not worry or fear about CAA, as the law does not affect the Muslim population of the country.

Dressed in a brownish-green attire with an Islamic headgear, Maulavi threatened violence against BJP and RSS workers by claiming that if Muslims hit the streets then BJP, RSS workers will be stripped of their clothes.

“We will show you the real picture, Inshallah. The Hindustan flag has three colours representing various religion. If they try to remove the Muslim (Green colour) from the flag and if Modi, Amit Shah and Yogi try to reach to the lowermost colour of the Indian flag, there is always a pole (Danda) attached to it. We will hit the BJP, RSS using that Danda in such a manner that their pants will be stripped off,” said the rabid Maulavi while trying to incite violence.

Read: 2019 anti-CAA protests: 9 visuals that prove they were motivated by deep-seated anti-Hindu bigotry and Islamic extremism

Taking his threats to abusive and derogatory levels, the Maulvi then declares that from the cloth that makes a single turban for a Muslim, they can make undergarments for 25 RSS members. The hatred, bigotry and open threats in his speech are indeed in a funny contrast with the relentless ‘minorities are in fear’ in India narrative.

Ever since the Citizenship Amendment Act was passed by the Modi government, Islamists, who are backed by opposition parties and “liberal-secular” media have unleashed violence across the country. The violence which started in West Bengal after Friday prayers at local mosques had soon spread to parts of Delhi, Karnataka, Uttar Pradesh, Gujarat, where Muslims resorted to riots, violence, arson and vandalism in the name of ‘protests’ against the enactment of the CAA.

Ironically, the CAA does not even concern Indian citizens, be it Muslims or any other community. However, in the name of protests, the Islamist groups have been exposing their anti-Hindu hatred openly.