The Muslim mob dispersed only after police released Hassan, the man who had abducted Sikh girl Jagjit Kaur, daughter of the Gurdwara's panthi. 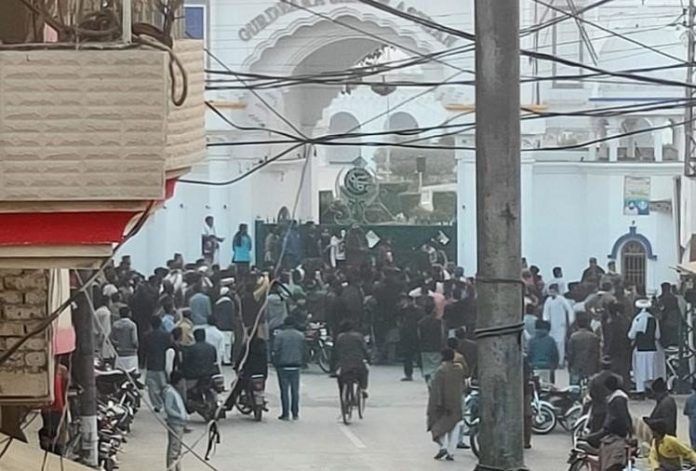 Following the attack on Sikhs by the Muslim mob at revered Nankana Sahib Gurdwara in Pakistan, the Indian government on Friday expressed its concern and called upon the neighbouring country to take immediate steps to ensure the safety and security of the Sikh community living in Pakistan.

In a statement, the Indian foreign ministry said New Delhi called on the government of Pakistan to ensure the safety and security of pilgrims who regularly visit the shrine that marks the birthplace of the founder of Sikhism. It also demanded strong action against the perpetrators of violence and vandalism.

India strongly condemns vandalism at the holy Nankana Sahib Gurudwara in Pakistan and calls upon Pakistan to take immediate steps to ensure the safety, security and well being of the Sikh community. https://t.co/Nx1317xQ1T pic.twitter.com/dFykWJa2xP

“We are concerned at the vandalism carried out at the revered Nankana Sahib Gurdwara today. Members of the minority Sikh community have been subjected to acts of violence in the holy city of Nankana Sahib, the birthplace of Shri Guru Nanak Dev,” the statement said.

“India strongly condemns these wanton acts of destruction and desecration of the holy place. We call upon the Government of Pakistan to take immediate steps to ensure the safety, security, and welfare of the members of the Sikh community,” the statement said.

The Indian government also asked Pakistan to take strong action against the miscreants who indulged in the desecration of the holy Gurudwara and attacked members of the minority Sikh community.

On Friday, in yet another incident reaffirming the persecution of minorities in Pakistan, the angry mob of Muslims had gathered around the Sikh shrine of Gurudwara Nanakana Sahib and started pelting stones at it. The mob was being led by the family of Mohammad Hassan, the boy who allegedly abducted and converted Sikh girl Jagjit Kaur, who is the daughter of the gurdwara’s granthi.

The mob of angry Muslims gheraoed the holy shrine on Friday afternoon, leaving many devotees stranded inside. The protesters threatened to destroy the gurdwara and build a mosque in its place.

The police along with the Pakistani Rangers and Army had rushed to the spot to quell the protest but so far they had failed in dispersing the violent mob away from the Gurudwara. The situation was brought under control after the local police and Pak Rangers arrested the protesters.

However, the mobs dispersed only after police released Hassan, the man who had abducted Sikh girl Jagjit Kaur, daughter of the Gurdwara’s panthi.

According to journalist Ravinder Singh Robin, the Pakistan Sikh Gurdwara Prabandhak Committee (PSGPC) president Satwant Singh had a meeting with the Sikhs at Nankana Sahib at midnight and demanded that Pakistan government should arrest the culprits under section 295 following the attacks on the Gurudwara.

Shockingly, Khalistani terrorist Gopal Singh Chawla can also be seen alongside Satwant Singh in the video.

#NankanaSahib ; @parbhandak president Satwant Singh had meeting with the #Sikhs at Nankana Sahib at mid night and demanded that Pak government should arrest the culprits under section 295. #GopalSinghChawla also seen in the video . pic.twitter.com/X8nM2TVRnl

However, following the attacks, the terror state of Pakistan has rejected reports of Gurdwara Nanakana Sahib being was attacked and desecrated by the Muslim mob. In a statement, the Foreign Office said that the provincial authorities in the Punjab province have informed them that it was a scuffle between two Muslim groups and not an attack on Sikhs.

According to the Pakistan government, the altercation happened on a minor incident at a tea-stall. It claimed that the District Administration immediately intervened and arrested the accused.

“Attempts to paint this incident as a communal issue are patently motivated. Most importantly, the Gurdwara remains untouched and undamaged. All insinuations to the contrary, particularly the claims of acts of desecration and destruction’ and desecration of the holy place, are not only false but also mischievous,” said the Pakistan Foreign Ministry.

The Government of Pakistan also claimed that it was committed to upholding law and order and providing security and protection to the people, especially the minorities.

In August 2019, Mohammad Hassan had abducted Jagjit Kaur, a daughter of a Sikh priest in Nankana Sahib, and forcibly married her after converting her into Islam. A video had gone viral showing one of the girl’s family members claiming that a group of men barged into their house, abducted Kaur, forcibly converted her to Islam and made her marry Hassan. However, Hassan denied having kidnapped the girl, claiming that she had married him out of her own volition. This resulted in clashes between the Sikh and Muslim community of Nankana Sahib.