It is pertinent to note that the blackboards in the above pictures are inside the Social Work building, implying that the professors of the Institute were well aware of the fact that their institute was used to promote seditious and secessionist anti-India propaganda. 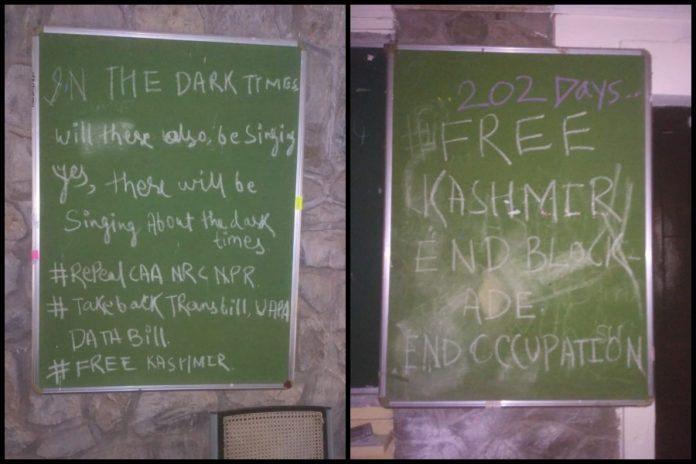 Amidst the annual festival of the School of Social Work, Sameeksha, a platform for field realities, contemporary issues and emerging social paradigms, shocking anti-CAA and Free Kashmir messages were found scribbled on the blackboards in the social work building in the prestigious institute of Tata Institute of Social Sciences, Mumbai (TISS).

The messages on the various boards ranged from demanding the Independence of Kashmir to the annulment of the Unlawful Activities (Prevention) Act. Other demands include revocation of CAA, NRC and NPR. There was also a poster that ‘End Occupation’, leading one to believe that the students who put the posters up believe that India is ‘illegally occupying’ Kashmir.

One of the blackboards read a saying from German-American philosopher H Arendt-“Citizenship is the right to have rights”, with the added message of repealing CAA and NRC.

Another one called for the liberation of Jammu and Kashmir and termination of the blockade while demanding the end of the occupation. It read “Free Kashmir, End Blockade, End Occupation”.

202 days was also written on the board, signifying the number of days since the Article 370 was abrogated and the union of territories of Jammu and Kashmir and Ladakh were integrated with the Union of India.

Along with the quote, the board was scrawled with demands to repeal CAA, NRC and NPR, Trans Bill, UAPA and Data Bill. The demand for “Free Kashmir” was also written on the board.

In one of the boards, several pictures of Azadi printed on them with the number of days elapsed since the abrogation of Article 370 were pasted on it.

It appears that ever since Kashmir is freed from the clutches of Article 370, certain students in TISS have taken the efforts of getting leaflets of Azadi and other contentious stuff with the number of days since the annulment pasted on the board.

It is pertinent to note that the blackboards in the above pictures are inside the Social Work building, implying that the professors of the Institute were well aware of the fact that their institute was used to promote seditious and secessionist anti-India propaganda.

In the aftermath of the enactment of the CAA, the anti-CAA protests that erupted in the financial hub of the country, Mumbai, saw widespread participation from some of the on-duty staff and faculties of the TISS.

The TISS administration had then rapped staff and faculties attending anti-CAA protests on the knuckles and issued a notification to its faculties informing them that absence from duty on account of protests against the Government of India will be deemed as unauthorised leave. The circular from TISS has come at a time when anti-CAA protests have turned into riots.