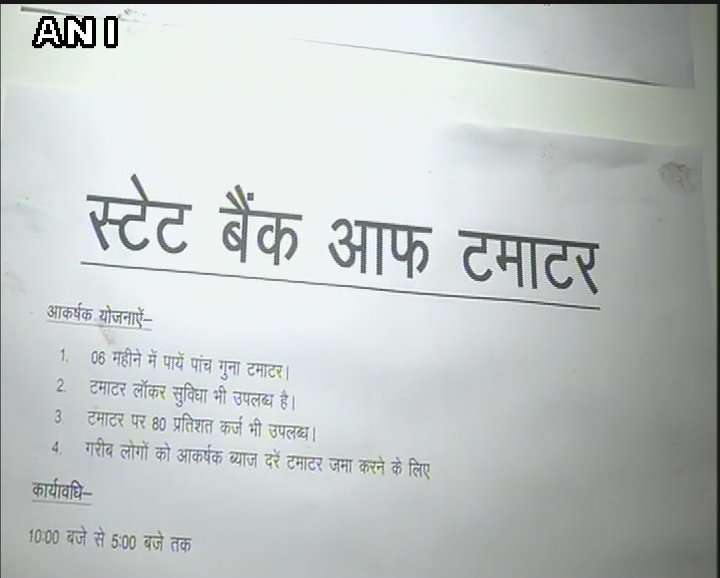 Sonia Gandhi led the grand old political party of India, Indian National Congress does not seem to be getting anything right.

First the party introduced a “Professionals’ Congress” and stuffed it with dynasts:

This was followed with the party launching a protest against rising prices of tomatoes, and this time the party did something “innovative” (discounting the possibility that parading dynasts as professionals was also innovative).

Congress opened a “State Bank of Tamatar” (State Bank of Tomatoes) in a bid to launch a unique protest against rising prices of tomatoes.

Here is a closer look at the “offers” of the “bank”:

Well, technically it is against the provisions of the Banking Regulation Act, 1949, to randomly call anything as “Bank”:

Well, we are sure that Congress has learnt its lessons from the National Herald case and knows that it can’t undertake any business while being a political party, let alone launching a bank. So yes, we will assume that it was a symbolic protest and a symbolic bank; the BJP government doesn’t need to raid them for violation of any rules!

However, it would have been better if Congress had kept it entirely symbolic, say their own workers being the bank managers and customers as well. But as per media reports, their “State Bank of Tamatar” even got a “customer” (who was not identified as any Congress worker).

Here is one such customer availing the services of the “bank”:

I have deposited 0.5 Kg tomatoes, will get 1 kg after 6 months. I’m 103-year-old, never thought have to see this: Srikrishna Verma, customer pic.twitter.com/PlXdnSYGvK

But this is cheating!

Alert Twitter users were able to spot this “scam” by Congress. Apart from this going back on declared promises of the bank, Congress was also supposed to be conning the citizens by taking tomatoes when prices are higher (now) and selling them back when prices are lower (December/January).

A symbolic protest has ironically become a symbol of how scams are carried out and how poor citizens are conned by making them believe in false promises.