More
Home Opinions Why 60 year old Mira Maheshwari had to flee from Pakistan to India
Opinions
Updated: 24 May, 2020

“My daughter was abducted and forced to convert to Islam. We tried to find her, and also approached court for the same, but we could not find her. Some other people took over the possession of our shop and home, and hence we decided to leave Pakistan.”

Words from Mira Maheshwari, who fled from Pakistan 10 years ago. Imagine the barbarism of the nation from that forced a woman who is at 60 years of age to pack up and leave for a new life across the border.

But I can give you a bit of good news. Mira Maheshwari is one of 90 Pakistani Hindus who formally received Indian citizenship at a ceremony in Ahmedabad yesterday. Roughly 70 years after Partition, India’s daughter, now 70 years old herself, has been embraced by the land of Bharat. 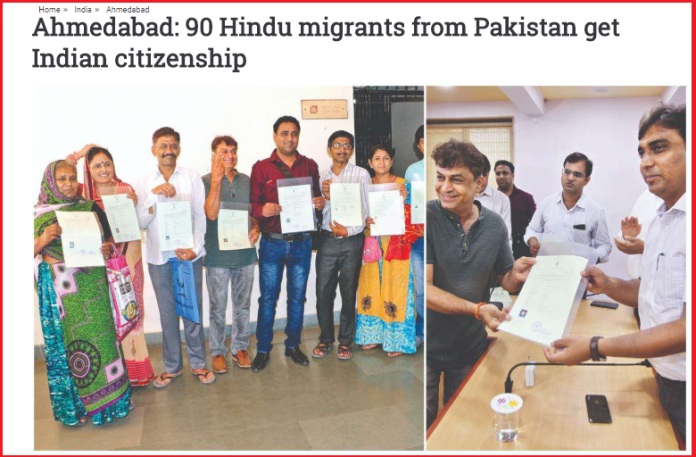 Take a moment to look at those shining faces. Observe how they beam with pride, joy and relief at being Bharatiya. These are the real faces of “Azaadi”.

I dare one of those snobbish academic or media elites to try convincing one of these people that there should be “Bharat ke tukde”.

Guess what? Bharat has been broken into pieces before and it was a nightmare. Ask these people. They had to live this nightmare all their lives until this very moment.

Look at their faces again. Don’t they look just like our friends, our neighbors and our family? They look just like us who sometimes end up taking their Indian identity for granted.  But look at those shining faces and you will know how blessed we are and how proud we should be of being Indian.

In a Dec 2016 notification, the Govt of India decided to speed up the process of giving citizenship to persecuted minorities (Hindus, Sikhs, etc) from Pakistan, Bangladesh and Afghanistan. Accordingly, local district collectors were given the power to issue certificates of citizenship instead of clogging the system all the way up to Delhi. Since then, the office in Ahmedabad has given citizenship to 320 Pakistanis (now Indians! Yay!) and another 200 or so applications are pending.

We on social media are angry all the time. We argue over everything. After all, India is this big crazy place that is buzzing with a billion plus voices. A billion plus dreams and aspirations jostling for space. We disagree all the time. Sometimes we end up hating each other. In the midst of this, sometimes we forget how lucky we are to be born in this land of Bharat.

We kids get too busy with our daily lives and we end up forgetting about our mother. We end up taking her for granted. But she is always there for us and always will be.

Bharat Mata ki Jai! Let’s say it for her sometimes.

At the moment, with a range of “eminent” personalities coming out in favour of Umar Khalid, he is winning this circuit hands down.
Read more

‘He pushed me on the sofa and forced himself on me’, says actress who accused Anurag Kashyap of rape: Here is what she told...

After an initial delay, police registered an FIR against Anurag Kashyap and initiated an inquiry into the sexual assault case

Delhi Riots: WhatsApp chats acquired by OpIndia show how some anti-CAA protestors were aware that violence was planned, discussed ‘de-escalation’

The WhatsApp chats accesses by OpIndia show that some individuals were aware that some anti-CAA groups had fanned the violence and they now need to de-escalate.

District administration removed a Christian Cross and a statue of Jesus Christ, which was illegally put up, on Susai Paliya Hill in Chikkaballapur in Karnataka.

India Today editors’ tussle with Republic TV is ruining their own credibility, one tweet at a time: Read how

Rahul Kanwal and Rajdeep's sly, targeted tweets against Republic TV are only helping to take their own credibilities further down, and exposing their own hypocrisy.

One of the main things is that you need to be seen at Karan Johar's parties, KWAN representative had told Suchitra Krishnamoorthi
Read more
Media

India Today editors’ tussle with Republic TV is ruining their own credibility, one tweet at a time: Read how

Rahul Kanwal and Rajdeep's sly, targeted tweets against Republic TV are only helping to take their own credibilities further down, and exposing their own hypocrisy.
Read more
News Reports

In the video, the chief of medical assistant cell in Maharashtra says that he has lost all hopes and that court is the only ray of hope now
Read more
Fact-Check

Bollywood actor Ranveer Singh, the husband of Deepika Padukone, has asked NCB whether he can be present during his wife’s interrogation
Read more
Crime

23-year-old Hindu woman has been brutally murdered by two Muslim youth after she refused to convert to Islam after marriage.
Read more

Amy Coney Barrett, a circuit judge on the US Court of Appeals, is expected to be POTUS Donald Trump's Supreme Court of nominee.
Read more
News Reports

Indian govt to decide on next step in Vodafone retrospective tax case after studying the order by Permanent Court of Arbitration rejecting India’s tax...

Vodafone won its arbitration against the ₹20,000 crore tax demand by India at the Permanent Court of Arbitration in Hague
Read more
News Reports

‘Women have fundamental right to choose their vocation’: Bombay High Court rules that Prostitution is not a criminal offence under the law

Pakistan link to Paris knife attack emerges, at least one perpetrator reported to be of Pakistani origin

Pakistani link to the Paris knife attack on Friday emerges. The arrested suspect is reported to be an 18-uear old man.
Read more
News Reports

From Hindu Hriday Samrat to Secular Liberal: Why Shiv Sena transformed itself so radically

If Shiv Sena chief Uddhav Thackeray had made one big compromise to grab the power, to continue in power he is making a series of them
Read more
Crime

Panipat triple murder: Noor Hasan had rapped the bodies of his wife, her sister and mother after killing them, burnt faces to prevent identification

The accused had killed his wife and her sister with a sharp weapon and had burnt their faces with diesel before dumping the bodies in separate locations.
Read more
Culture and History

Tales from the Baburnama: Babur’s homosexuality and ‘love’ for a young child

Often idolised by the extremist section of Islamic society, Babur is assumed to be an ideal Muslim who followed all the modern day practises of Islam.
Read more
News Reports

Gilgit-Baltistan based activist Baba Jan has been kept in jail by Pakistan on false of terrorism and murder, netizens demand his release
Read more
News Reports

Khan said in his statement that the Khalistanis had claimed that they have the ISI's support to join the fight against the government of India.
Read more
Read all the latest news