Rafale cacophony: NDTV gives a masterclass in how pliant media is expected to behave 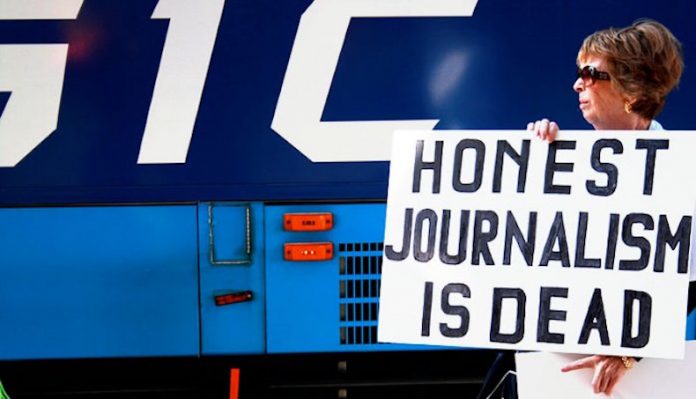 On 2nd January 2018, Congress President Rahul Gandhi and Union Finance Minister Arun Jaitley exchanged arguments over the Rafale deal inside and outside parliament. While the finance minister tried to put some sense into the debate by describing various aspects of the deal in very simple terms, Rahul Gandhi refused to relent and repeated the same old lies he is peddling for a year now.

During his speech in Lok Sabha, Arun Jaitley had said, referring to Rahul Gandhi using AA to mean Anil Ambani, “if we are into abbreviations, can I ask, was he playing in the lap of one Q, about who in the Bofors case, the CEO had in his diary written – Q must be protected at all accounts.” Jaitley also mentioned various scams under the Congress government, including the Bofors scam.

Reacting to that speech, controversial media house NDTV has published an article on its website, which essentially says that bringing the Bofors was a bad idea by BJP. Written by Business Standard editor Mihir Sharma, who is often caught spreading fake news on social media, the article tries to draw a parallel between Bofors and the Rafale cases. He says that nothing was proved in the court in the case of Bofors, but Congress’ image was tainted due to the controversy, and the same will happen to BJP due to Rafale controversy.

We are not sure whether that is just speculation or wishful thinking because there is a huge difference between the two cases. In the case of Bofors, there were allegations of bribes being paid to secure the deal. The case was exposed by Swedish media, not by opposition parties in India. Due to the expose, Bofors was blacklisted by Indian in 1987, when Congress was in power. The link between middleman in the deal Ottavio Quattrocchi and the Gandhi family is well documented. There was an Interpol red corner notice against Quattrocchi on India’s request. The case was investigated by CBI, and the charge sheet was filed in 1999 during the NDA-I government.

Nothing was proved in the Bofors case due to the fact that CBI investigation was botched up. There were long delays in the probe, they didn’t send important documents to ensure extradition of Quattrocchi to India, they also missed court hearings and submission of documents, leading to weakening of the case. Observing CBI’s role in the probe, a Delhi Court had said that there are “certain malafide intentions” to derail the case. “I agree that there are certain malafide intentions in the case and there is no doubt in that,” Chief Metropolitan Magistrate Vinod Yadav had said.

Compared to Bofors, there is no allegation of bribes being paid to secure the deal in case of Rafale. The apex court has given its verdict that the Rafale deal does not need to be investigated, dismissing several petitions demanding the same. Studying the information provided by the union government, the Supreme Court has said that it is satisfied with the government’s response and that it can’t order an investigation based on perceptions of people.

It must be remembered that Rafale was chosen by India after an extensive bidding process during the UPA government. Of the 126 aircraft that India was to buy, 18 were to be made by Dassault and the rest 108 were to be made by HAL under licensed manufacturing. As the deal didn’t go through over disagreements on terms of the manufacturing by HAL, it was cancelled, and India decided to buy 36 planes, or 2 squadrons, directly from Dassault, instead of 18 as per the original deal.

Other than the Congress party and activists raising hilarious allegations like Modi giving ₹30,000 crore to Anil Ambani (which is false and was rebutted in detail) under the deal, there is not even a single concrete allegation of corruption in the deal. And surprisingly, even the NDTV article seems to agree. The author accepts that he “continue to be unconvinced that there is a real case against the Prime Minister over Rafale, at least given what’s in the public domain currently.” This means an acceptance that Rahul Gandhi is making baseless allegations about the deal. But instead of criticising Rahul Gandhi for such blatant lies, the article goes on to focus on how the Congress president has been successful in creating a doubt in the minds of people about the deal.

The article says that “defence deals should not become the fodder for easy political wins”, but then goes onto praise Rahul Gandhi for hurting Modi’s corruption-free image, despite agreeing that there is no corruption in the deal in the first place. The author says that Rahul Gandhi may be wrong with the facts on Rafale deal which Arun Jaitley had corrected in Lok Sabha, but Gandhi has proved to be a good and smart politician. Yes, Mr Sharma says that Rahul Gandhi has become a good politician by successfully spreading falsehood and ignoring publicly available information. As they say nowadays, the narrative is important, not data.

The article also suggests that the allegations of scams against UPA-II governments were same as current allegations on Rafale, which is completely untrue. The various scams during the Manmohan Singh government were probed by investigation agencies, and the cases tried by courts. Nothing of that sort is happening with Rafale.

The one thing that Rahul Gandhi keeps saying is that Modi gave ₹30,000 crore to Anil Ambani through the Rafale deal (which sometimes becomes ₹1,30,000 crore, much more than the deal value), which is nothing but pure unadulterated fiction. But the article is silent about this. Most journalists, no matter the political affiliation, understands the basics of offset clause and other details in defence deals in general and the Rafale deal in particular, although we are not sure about this particular author. Still, almost none of them counter Rahul Gandhi’s lies, and this article is also no exception.

In fact, the author discusses none of the actual charges made by Rahul Gandhi. Perhaps the reason is that, while discussing the allegations, he will have to do the blasphemy of directly saying that Rahul Gandhi is lying. In the current scenario, nobody expects media houses to be neutral, and the hatred that NDTV and this particular author has for BJP is well known. Generally, even explicitly biased media houses try to pretend to be neutral, but with this article, no such attempt has been made. The text of the article indirectly accepts that there is no basis of allegations made by Rahul Gandhi, but instead of criticising him, it actually praises him for being able to corner BJP with lies.

The author says that the government will be in a dock if Congress raises the fake audio of Goa minister Vishwajit Rane in court, and it does not matter if Manohar Parikar denies having any file on Rafale. He actually advises Congress to do so, arguing that even if it is proved to be false, it will be a win for Congress. He says that government will be held guilty for misleading the court. Which is a bizarre assertion, because if it is proved that the audio is fake, Congress will be held guilty of misleading the court, not the government.

Today media is inevitably biased, there is no denying it, but this open support of blatant falsehood by Congress president is a new low for media. During press conferences, when Rahul Gandhi makes outrageous allegations of ₹30,000 crore, no journalist present questions him. Now this article by NDTV explains why, the journalists are actually very much impressed with Rahul Gandhi’s ability to lie day after day, and they believe that somehow these lies will corner Modi. It also shows how lowly media think about public intellect.