A tribute to OpIndia’s fallen star

Devanshu was taken away too soon. It was not his time to go. While I pray he is in a better place, looking down on us and writing for the Gods, he will always be a part of the OpIndia family and will be terribly missed. I recall vividly, the gloomy Sunday afternoon where I got to the task that I truly hated the most. Internship applications. A dreadful job. Trying to find those few applicants who would fit it from the sea of applications is not something I look forward to. After going through several applications, I read Devanshu Rajput’s email.

Greetings of the day!

I saw the advertisement and tweet on OpIndia.com for an internship. To be honest, it arrived as an exhilaration because I envy a career and life which fights against the left-leaning and anti-India ideology, the seeds of which have been sowed deep in our motherland, Bharat, the land of Great River Saraswati – the origin of our lineage.  For years, these people made a mockery of our values, Hindu traditions and nationalist sentiments. But, their end is near, as initiatives such as OpIndia have mustered the courage to voice the dissent against the corrupt practices by those who are infested in our system like pests for years with the ultimate objective to destroy the oldest tradition in the world. I am 19 years old staying in Delhi, with no prior qualification and experience in professional news investigation, fact-finding, journalistic writing and field media work. But, I have contributed to your website OpIndia.com with my articles, in the consolidation of your idea. I am grateful that you published some of my articles on your main website OpIndia.com and people contributed MyVoice – Not So Sacred Saint, Saudi And the Silence, Ambers of Khalistan and United Nations And its Hypocrisy. Therefore, I am kindly applying for the internship at OpIndia.com.

I kindly request you to go through my work and assess its quality and potential and reply if you find me capable to undertake the coveted internship.

Sample of my work and articles in PDF are enclosed attached. Jai Hind

What caught my eye almost immediately was how passionately he wrote and that he was only 19. His articles were measured, for his age anyway. He wrote about how Mother Teresa was one of the greatest frauds to have been unleashed on India, how the world is silent on the atrocities heaped by Saudi Arabia, the hypocrisy of United Nationa and even the shades of Khalistan.

I was still skeptical of hiring him because 19-year-olds generally have a serious issue with commitment and work discipline. But he had messaged me incessantly on Twitter asking for the opportunity to intern. I called him up then and in our brief chat, I asked him why he wanted to formally work with OpIndia and how he planned to manage the workload along with his academic commitments.

He said he had a ‘medical issue’ and was undergoing treatment for it and hence, was on a sabbatical from school. I hired him.

While he worked passionately, Devanshu never led us to believe just how serious his condition was. I remember the day when Devanshu messaged me asking for a prolonged off from work. It was on October 27th 2018 that he sent me the following message:

I thought I could keep this to myself, and work with opindia as I had thought while applying for an internship. But, things haven’t gone that smoothly, so I will have to disclose, a personal incident, which made me irregular these days from work, for which I am deeply sorry.

As I told you while applying for an intern, I am 19 from the state of UP. When I reached class 12, a tragedy befalls me, which set my life on the altar of troubles and traumas.

I was diagnosed with osteosarcoma, a sort of bone cancer, rampant in teenage cancer but rare among overall cancers.

I was advised 12 cycles of dreaded chemotherapy, and surgery. By, the time treatment began, the tumour became more aggressive and doctors planned leg amputation.

In april, after six cycles of chemo, surgery was due. Doctors tried luck, and saved my leg, with the insertion of implant that barred my right leg from folding. Doctors had warned that, the tumour can come back, though chances are few.

Then my chemo began, and this month I completed my 11th chemo. Oncologist said, this is my last cycle. This was the time I joined opindia with the hope that, work will help bail me out of last years’ trauma. But, by end of oct, tumour striked back, this time in my thigh muscles on the same leg.

That day, when I didn’t turn up for work, I had to be rushed to hsptl to do tests of that tumour.

Today, Dr Shah Alam, my surgeon ascertained its tumour and said there is no option than to ampute my right leg, else it can metastate to body and damage even more.

This news has pushed me and my whole family into irreparable trauma. Amputation will happen this week.

If I had known, that tumour will strike back, I would have never applied for intern and become a liability upon your team. I no way, intend to sway you or your team to take responsibility of my ill fate.

I rest upon you the verdict of either keeping me or not, maam. I really want to work for opindia, and I can continue work after procedure, that will I guess span upto 10 days. Even in those 10 days, I can work.

If you can, plz try to call or ask me to call, when you have time.

This is my personel tragedy and no one knows about this other than my immediate family.

I was heartbroken. A young boy, all of 19. His brother, Pritish says, “Osteosarcoma is a doom. The cancer spreads not only to a local region but gets transported to different parts of the body through the lymph nodes and blood vessels, lungs in case of Devanshu. The prognosis was becoming narrower, as Cancer began to evolve in the 4th stage. By the time he had completed the painful 12 cycles of chemotherapy. But, these were not enough to weigh his undying spirit. So, life rendered him with another oncological surgery. This time, it ended up with amputation of his right leg, above the knee (tumour had recurred)”. 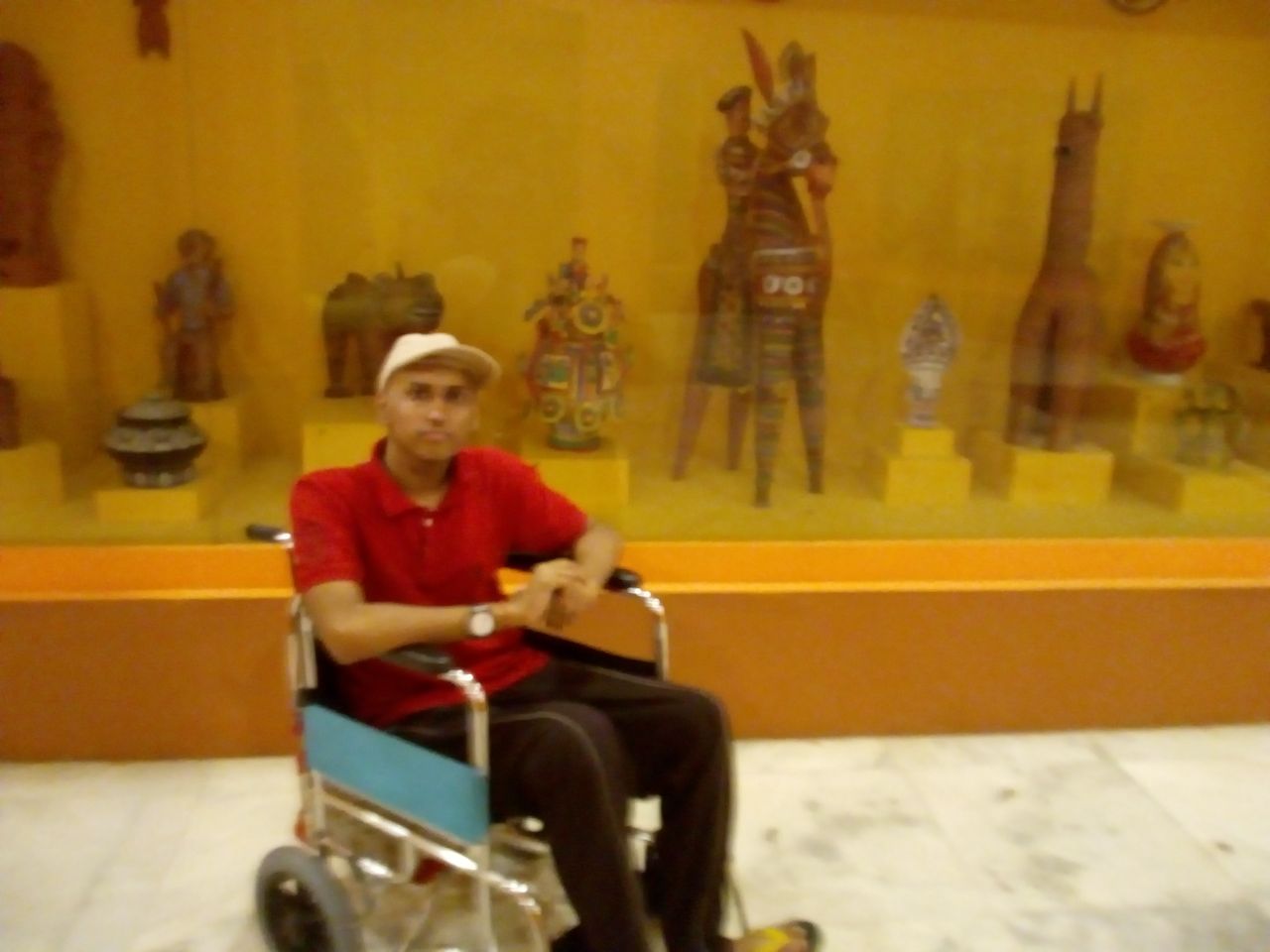 After all of this, Devanshu was back to work on 20th November. Happy.

I don’t think I could have gone on. I don’t think I would have been able to deal with the raw hand I was being dealt with. He did. He pulled himself back together and came back to work.

Pritesh, his brother says, “Devanshu was compelled to replace his dreams of becoming a doctor with the art of writing and airing his voice. Thus, he was in constant search of a platform to nurture his love for a better India. Out of the blues, he found OpIndia founder Rahul Roushan and Chief-Editor Nupur Sharma on Twitter and followed over this Microblogging site for a year. Gradually, he got acquainted with a wide political spectrum and falsehood of Mainstream Media. He was recovering from his first surgery (he had not lost his leg), suffering from the pain of chemotherapy, he got an opportunity to apply for the internship in OpIndia. Also, his couples of articles were published on My Voice and Main website during the course of time. At a point of time, he was disappointed over non-reply from OpIndia, but he relentlessly kept on pinging and pushing Nupur Sharma over Twitter to let him know the results. Finally, he was selected as an intern. He continued working amidst the painful sessions of chemotherapy. As he couldn’t sit, out of his weakness and surgery, he used to type over WordPress being lying on the bed and, frequently, checking the Slack Notifications”. He again fought back, resurrected his fire for writing, although only with one leg this time. After February, the conditions with lungs had worsened. Pleural effusions and multiple tumour sites in both lungs made him bedridden. He was left with no other option to suffer and cough. Chemotherapy was no more an alternative. He was counting his life in seconds now.

When we read the email from Devanshu’s brother, Pritesh, we were numbed. None of us really knew what was to be said, or how we should react to life so young being cruelly snatched away too soon.

I wondered then if I had done justice to his time with us. Did I teach him what he wanted to learn? Was his time with us fulfilling? Did he find his voice, something he really wanted to do? I went back in time and I recalled every time I had mercilessly edited his articles and asked him to pay more attention. I wondered if I was ever too harsh on him. Or ignored him when he asked for help.

When someone so young leaves us, with grief comes a tonne of guilt and that guilt cannot be rationalised no matter how hard one tries.

Devanshu was taken away too soon. It was not his time to go. While I pray he is in a better place, looking down on us and writing for the Gods, he will always be a part of the OpIndia family and will be terribly missed.

In our prayers and hearts, he shall rest. Forever.